Car Crashes Near I-House, One Arrest Made 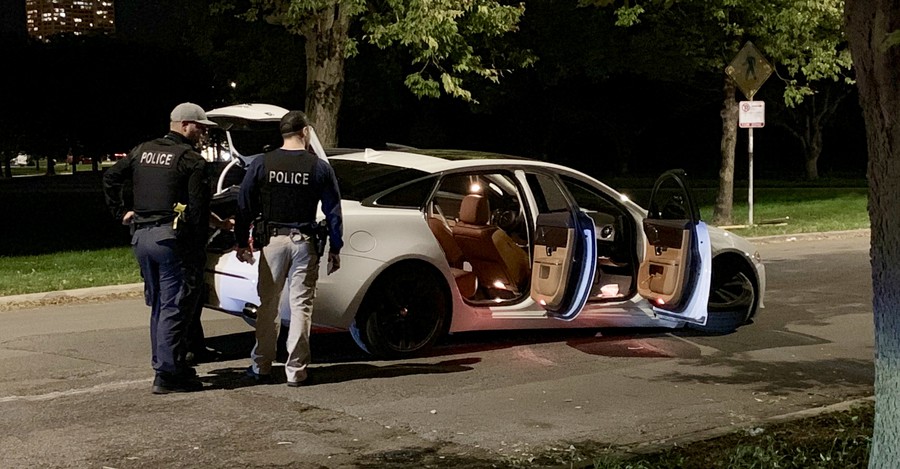 Witnesses on the scene of the crash say that three or four individuals fled from this Jaguar sedan.

Update (10/23/18 12 p.m.): The CPD news office emailed The Maroon a statement reporting that they were responding to a call of a man with a gun. An agency assisting the CPD had apprehended a subject that fled from the crash, but further investigation revealed that the subject fled from a stolen vehicle from Skokie. The alleged offender, 27-year-old Sean Johnson, was arrested on signed complaints and charged with one misdemeanor count of Criminal Tresspass to Vehicle.

At around 6 p.m. today, three or four individuals fled from a white sedan that crashed into another vehicle on the intersection of East Midway Plaisance and Dorchester Avenue across from International House, according to people involved in the crash. Two Chicago Police Department (CPD) officers on the scene at around 6 p.m. said that three shooters, who may have been fleeing from another incident west of Hyde Park, were in the area but did not explicitly link the two incidents.

According to an email sent to at least the residents of Phoenix House by their resident heads in I-House a little after 9 p.m., UCPD said that the individuals who fled the car were not shooters and they ran south away from the heart of campus. But when reached over the phone, a University spokesperson said that he could not provide further details of the incident, saying it was under CPD's jurisdiction. When reached via e-mail, CPD said that it would have more information by tomorrow morning.

More than 10 University of Chicago Police Department (UCPD) and CPD cars were present on the scene. At least one helicopter was roaming the area.

The officers on scene declined to give further comment.

This is a developing story.