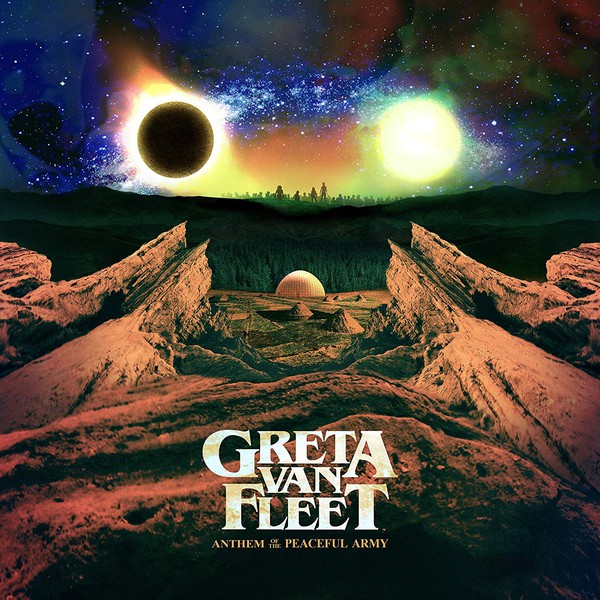 Many people accuse Greta Van Fleet of being a Led Zeppelin rip-off, but it’s worse than that. They sound like a rip-off of a Led Zeppelin rip-off, helmed by a 14-year-old who had won a Robert Plant sound-alike contest—not a great set up for their new album, Anthem of the Peaceful Army. Led Zeppelin itself was famously guilty of co-opting obscure blues and folk songs and rearranging them into scorching behemoths, but even in their outright plagiarism, Led Zeppelin created something viscerally astounding and timelessly beautiful in its own right.

On Anthem of the Peaceful Army, Greta Van Fleet does just the opposite. Though the song lyrics are their own, they merely rehash and regurgitate. They speak with what sound like English accents even though they are from Frankenmuth, Michigan. The guitarist has long brown hair, and he plays a deep red Gibson SG, imitating Zeppelin’s Jimmy Page’s style not only musically but visually. They look like kids in rock star Halloween costumes. People expect to be impressed that 16-year-old kids are doing such a good job of sounding like Led Zeppelin. This is a common selling point for the band—that they are so young means that their music is inherently impressive. In fact, they are 22, which is a year older than Robert Plant was when he made Led Zeppelin’s debut album.

If this album were experienced in a vacuum, it still wouldn’t be good. Remarkably cheesy and bloated, half of the album consists of preachy ballads and flower-children misty-mountain nonsense—about a new day rising, the sea rising, the mountains rising, the sun rising—and the other half is melodically indistinguishable blues-rock. Lyrics such as “I saw your picture, it’s the best/ the finest in the land” and “Girl, you’re so young and pretty/ but you’re evil,” are saccharine at best. The lead single, “When the Curtain Falls,” distastefully mocks a Hollywood starlet from the ’60s for taking Obetrol, which was at the time prescribed as a diet pill. Overall, chord progressions are bland and the melodies are monotonous. This is not album of artistic merit, and this is not an album that takes any chances.

More concerning is why this band was ever put on such an enormous pedestal. No rock band of recent years has been hyped more feverishly than Greta Van Fleet. It was supposed to be the next big thing, the savior of rock ’n’ roll; it gave people hope. Lovers of rock ’n’ roll seem to think that Greta Van Fleet is fighting the good fight, and Greta Van Fleet seems to think so as well. But it is never a good sign when those on the frontlines of a cultural movement retreat headfirst into the past.

Until now, I believed rock ’n’ roll could still be revitalized. But listening to this album, I have become convinced that Greta Van Fleet are the four horsemen of the apocalypse—that they are the death of rock ‘n’ roll.

There is a single hackneyed Zeppelin-esque psychedelic breakdown (think “Dazed and Confused,” “Whole Lotta Love”) that Greta Van Fleet attempts in the extended version of “Lover, Leaver,” evidently unsure whether they could pull it off (they couldn’t). It has eerie, backward-sounding guitars panning from speaker to speaker, trying to make you feel like you’ve suddenly fallen into an air bubble in an underwater cave, but there’s just something missing. As for the rest of the album, it only attempts to copy Zep in the most superficial sense. It has the screeching, soaring vocals, the blues riffs, even the slight twang of the guitar solos and the vintage organ sound. But it doesn’t have the jarring, bizarre chords, it doesn’t have any mandolin solos, and it doesn’t have any a capella guitar breakdowns. It has neither the staggering, pounding heaviness of Led Zeppelin nor the aching, creeping spaces in between. Most obviously, it does not have anything close to John Bonham’s drumming. What felt visceral in Zeppelin’s music feels sanitized and calculated in this album. It levels off the highs and lows; it reaches sometimes, but can’t quite make it.

Maybe I’m wrong. A lot of people seem to disagree with me; even Robert Plant himself gave the band his seal of approval. Elton John likes this band, and Rolling Stone Magazine has been eagerly following their every move. The old guard of rock gives them two enthusiastic thumbs up, pining for a time when rock ’n’ roll stood for something. No rock band has gotten this much press prior to even releasing a full-length album since The Strokes pre–Is This It. Critics have gotten it wrong before, but there is still one thing that haunts me. It’s something I heard someone say after I first saw Greta Van Fleet, and I still have it written in the notes of my phone: “Young girls ran over, losing their minds. I saw someone crying…” This haunts me because the kids are never wrong about music—and if this is the music that they find most worthy of their passion, then we have failed the kids.