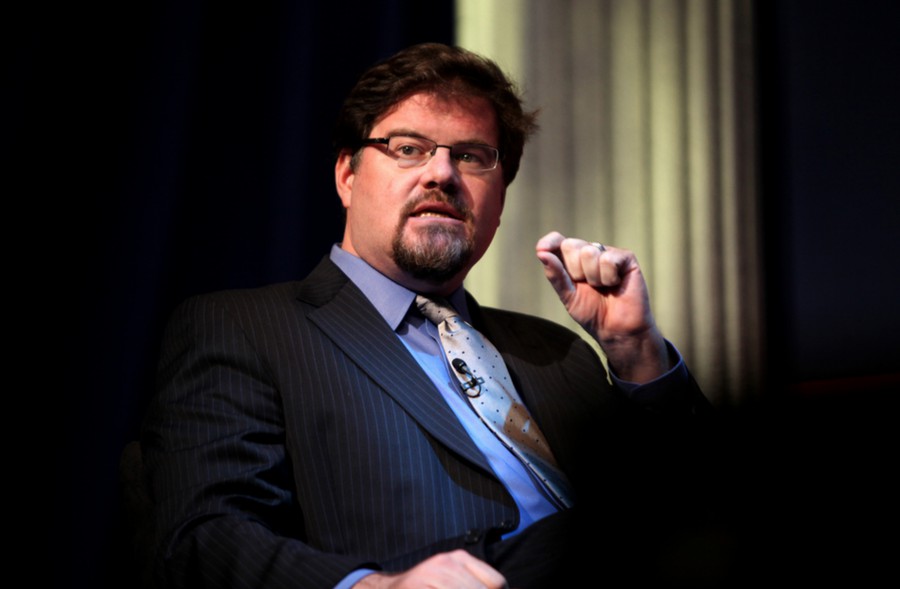 Conservative columnist and National Review editor Jonah Goldberg discussed his new book, Suicide of the West, at the Institute of Politics (IOP) on Friday. The book is an analysis on how the rise of identity politics, nationalism, and populism is destroying America’s democracy.

IOP Pritzker Fellow Mary Katharine Ham, a conservative commentator, senior writer at The Federalist, and CNN contributor, held a conversation with Goldberg. She introduced the book as a study on how nationalism and populism have been bred in various cultures and societies. Goldberg stated that his book looks at human history dating back 250,000 years, mentioning that the book was already underway when Trump was elected.

Ham asked about Goldberg’s process of writing the book, and specifically about how he researched his material. Goldberg said he modeled his writing style on publications such as The Public Interest or Commentary, aiming to ground his arguments in scientific research.

“One of the things I tried to do is work on terms that should be appealing to people across the aisle from me who say they care about science and evolution and facts and empiricism,” Goldberg said. “My argument is entirely grounded in that stuff as opposed to appealing to divine authority, which has pissed off my friends on the religious right.”

Ham also touched on the impact of social media and online news outlets on the culture of the United States. The Internet’s relationship with the media, Goldberg said, has threatened the economic systems that United States is based upon.

“Capitalism depends on values and norms it cannot create and cannot restore once lost. Those norms come from institutions like the family and organized religion,” Goldberg said. “Due to the erosion of civil society from things like Facebook and Instagram, people are retreating into their homes and following politics as if it is entertainment.”

Skyrocketing partisanship over the last two years has made supporting a party similar to supporting a sports team, he added. Comparing partisanship to the rivalry between the Chicago Bears and the Green Bay Packers, Goldberg stressed that if one’s own side is incapable of winning, the objective turns to wishing for the opposition’s collapse.

“When you start watching politics as a form of entertainment,” Goldberg said, “you start internalizing this idea that politics is all about punishing the other tribe.”

Both commentators said that within their own work, they have received increased hostility from both Republicans and Democrats. Their refusal to ardently support President Donald Trump while remaining conservative, Ham said, has caused this division.

Ham brought up the controversy sparked online regarding Mark Wahlberg’s daily routine—an intense schedule of exercise, work, and prayer, which some have criticized and parodied. She suggested that social media has been responsible for a backlash against self-control.

“We live in this era where self-control is frowned on and self-expression is celebrated at every turn,” Goldberg responded. “30 years ago, if you saw someone walking towards you with a neck tattoo, you’d walk to the other side of the street. Today that person could be a poetry teacher at Bryn Mawr.”

Though he believes the hostile divide in partisanship has spilled into everyday life, Goldberg said that he believes that the more power is delegated to a local level, the greater chance there will be for a return to civil discourse and an end to hostile partisanship.

“If you give people more control over their lives they will feel less like unseen forces are controlling their lives,” Goldberg said. “If you push power down to the local level, you will still have culture wars, but the winners and losers will have to look each other in the eye when talking with other parents at the kids’ track meet or at the supermarket, which breeds a certain sense of empathy and humility.”