38th Annual Humanities Day Celebrates the Life of the Mind 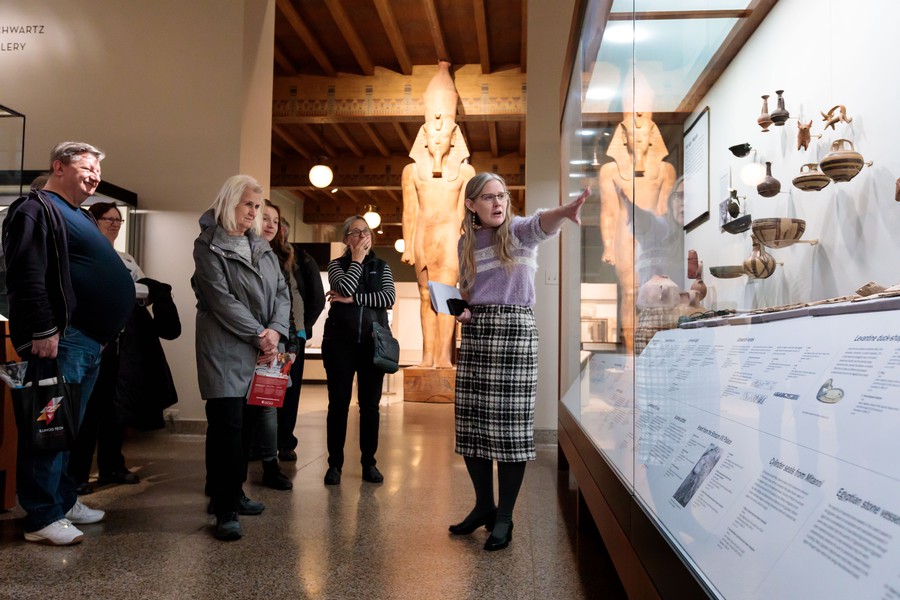 By Alina Kim   and Kiera Yu

On October 20, a particularly windy day in the Windy City, students, alumni, and community members trickled in and out of Stuart Hall, eager to interact with distinguished University of Chicago faculty of all departments, engaging in activities ranging from talks on women painters in ancient Greece to a guided tour of Shadi Habib Allah’s exhibition, Put to Rights, at The Renaissance Society. Humanities Day, a tradition at the University since 1980, has gathered hundreds of community members in celebration of debates, history, and discovery for nearly 40 years, and its 2018 event proved to be no exception.

The day started with 57th Street Books’ 35th Anniversary party as a perfect complement to Humanities Day. With stickers of its logo, free coffee, enamel pins, and, as always, dogs excitedly wandering through the labyrinth of books, the students’ favorite bookstore opened the morning with a bright, encouraging message: Books, literature, and writing are perfect media to spread opinions, personal philosophies, and dreams for a better future—things that define humanities and the importance of enriching our lives.

Numerous discussions were held all around the campus throughout the day. Professors and lecturers from archeology, linguistics, English, and history departments and more presented on topics such as alternate reality gaming, the art of climate change, and cinematic Black feminist theory. The event’s keynote address was given by linguistics professor Christopher Kennedy on the meaning of “truth” in our supposed “post-truth society”. Kennedy’s work explores the way in which linguistic forms relate to meanings, and his address prompted the audience to consider the essential role of truth in both communication and society.

In the Oriental Institute, Egyptology professor Janet H. Johnson led a talk about gender roles in ancient Egypt via excavated documents. For an ancient civilization, Johnson noted, women had a rather major role in society. In modern studies, the near-equal status between noble Egyptian women and men is often emphasized. “But what of the common women?” Johnson challenged. She elaborated on the fact that Egypt was ahead of its time in terms of women’s rights, for the nation celebrated motherhood, advocated the development of businesswomen, and permitted women to divorce and own property. As an attendee suggested, it was perhaps an older version of feminism.

Armando Maggi, an Italian literature professor and a member of the Committee on the History of Culture, talked about how images in fairy tales can reveal subtle clues about our own reality in his presentation “What Is Real in Classic Fairy Tales? Truth, Fantasy, and Hope in Contemporary America.” Having published various books on early modern culture, demonology, and Renaissance love philosophy, Maggi opened his audience’s eyes to the underlying messages in the creation of some of society’s favorite fairy tales. In his presentation, Maggi argued that imagination is the key to unlocking logic, and this logic leads to the application of seemingly absurd childhood stories into our own American culture. He focused on the definition of “people” in fairy tales and how that translates to modern-day American citizenship and community, especially in a time haunted by racism and discrimination. What do fairy tales say about different societies as they are passed from one nation to another? Does the twisting of fairy tales, such as the change from the original Sleeping Beauty story, “Sun, Moon, and Talia,” into the famous “Little Briar Rose” by the Brothers Grimm, give us hints about the twisting of stories in our news channels?

The most impressive part of the presentation came when Maggi related the use of fairy tales in influencing the public to President Donald J. Trump’s slogan, “Make America Great Again,” calling the message “a coherent summary of a tale in the making”, as a tale of war is created and broadcasted through the media. He raised the question of what Trump’s future actions could be as a self-appointed “American Hero” in this tale. Maggi ended his talk by warning the audience to be aware of when such tales are told and stay vigilant under their influence.

Humanities Day, attracting countless people of all ages, careers, and interests to the University of Chicago, was undoubtedly a success in its 38th year, keeping the value of intellectual curiosity alive through one captivating lecture after another.