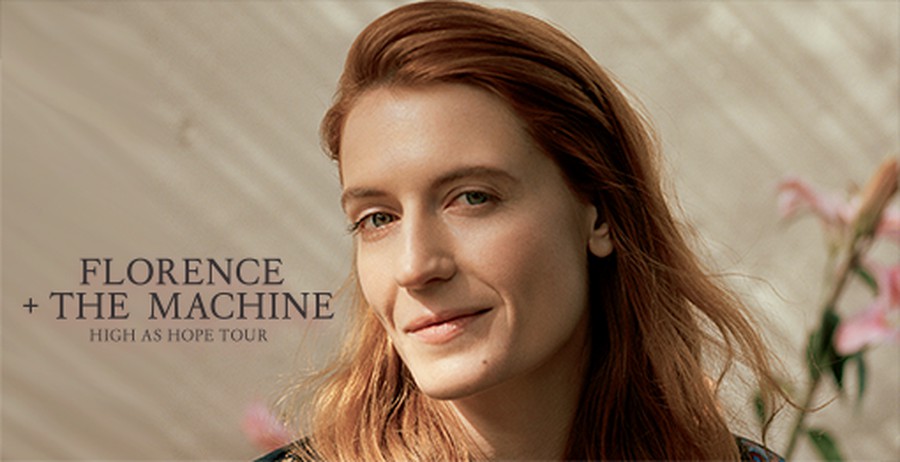 On October 19, a mere hour before the opening act, only the most dedicated fans of Florence + The Machine walked into the wide halls of the United Center, adorned in flower crowns galore and flowing, floral dresses. Inside the stadium, the seats were barely filling up when the opener, Perfume Genius, performed a decidedly humble set. The two screens sandwiching the stage remained unused while the Seattle-based musician, with only a few instrumentalists, performed in front of silky masses of fabric towering like ghosts. After thanking those present for “coming early to listen,” he performed fan favorites such as “Slip Away,” “Wreath,” and “Fool.” At once delicate and brash, he ended the set with the hit “Queen,” during which the audience was doused in royal purple light as the singer, whose music addresses the challenges of being gay, implored, “Don’t you know your queen?”

More people flooded the stadium as crew members diligently prepared the stage for the barefooted spectacle to come. The setting was undeniably transformed: The glacial mountain range of Perfume Genius’s spectral stalagmites was replaced with bands of pale wood that caught fire in the orange stage lights, exuding a much warmer atmosphere. The atmosphere grew still hotter with anticipation as the band members ascended the stage, including harpist Tom Monger, who has been an integral part of Florence + The Machine since the band first started in 2007. Finally, front woman Florence Welch, in a sunflower-yellow dress, glided onstage and opened the set with “June,” the summery first track on the band’s most recent album, High as Hope.

As with most songs on the new LP, “June” starts off silently and is much better appreciated in quiet surroundings or with high-quality headphones. It leads the listener in with the cavernous lull of the piano and the timid twinkling of chimes before picking up with the simple yet profound invocation in the chorus to “hold on to each other,” ultimately escalating toward a physical and spiritual high at the end of the song. In live, however, the symphonies flared up in the vastness of the concert hall and every note tickled the audience’s bone marrow. Standing still while singing for most of the beginning of the song, Florence unleashed a miasma of wild twirls and dervish-like spins towards the denouement of the song.

This was followed by “Hunger,” the second single off the album. Beautifully shot by director AG Rojas, the “Hunger” music video lends many of its dance elements to Florence’s performances on tour. While she has been known for her zealous dancing and impressive offstage leaps, going as far as breaking her foot during an especially ambitious jump during a previous tour, her movements while performing tracks off High as Hope seemed somehow less restrained and choreographed. It was as if her performance corporeally embodied the cathartically raw emotional honesty of the album. Although 2015’s How Big, How Blue, How Beautiful was an attempt at approaching this candor, exorcising herself of demons ranging from substance abuse to a messy breakup, it is with High as Hope that she came to terms with such issues through quiet and calm confession—to herself and others. Yet, on the current tour cycle, the rampant rage of “What Kind of Man” (2015) was not superseded with the cutting candidness of “Hunger”—rather, both songs were performed, in a way augmenting each other.

Indeed, older material was vividly present during Friday’s concert, arranged into a narrative of suffering, growth, and hope. Just after performing “Hunger,” the indie band performed “Between Two Lungs,” a song from Lungs (2009), followed by “Only If For A Night” from Ceremonials (2011), and “Queen of Peace,” from How Big, How Blue, How Beautiful (2015). Within the respective albums, each of these songs falls into a particular story, but sung concurrently on a 2018 tour, they mark the stepping stones of a journey taken by all of Florence + The Machine, and their fans. Much to the audience’s delight, the unquestionable bop “Dog Days Are Over” was also on the set list. Per tradition, mid-song, Florence paused and encouraged the attendees to embrace one another and to “tell each other that you love each other!” What distinguished this performance was an additional request: “Look deeply into a stranger’s eyes and say, ‘Please register to vote!’ and then tell them you love them again!”

During the show, Florence did not shy away from addressing politics, transitioning from the introduction of the song “South London Forever,” about messy teenage times, to talking about the importance of hope in dire circumstances. “My heart hurts a lot at the moment,” she admitted, urging the crowd to “please keep showing up because hope is an action and I believe in you and I believe in love.” “A revolution in consciousness starts with individuals,” she continued, “and the things you do, do make a difference and they do matter.” She then encouraged viewers to hold hands and to sing along to “South London Forever,” a charming ballad inspired by her hometown Camberwell. Later on, she prefaced the song “Patricia,” dedicated to punk poet Patti Smith, by decrying toxic masculinity and revelling in the powerful feminine energy of the concert’s attendees.

Needless to say, the night was gloriously transcendental. With an encore of the soul-shaking “Big God” and the cleansing “Shake It Out,” the concert came to a conclusion after 16 songs from throughout this British band’s career were performed. In the introduction to Florence’s book of lyrics, poems, and art, she describes the prophetic nature of her music as a kind of “useless magic,” which is also the book’s title. However, the songstress’s charm is far from useless, as anyone could have seen in the tear-streaked faces and smiles leaving United Center on Friday, or in the countless pieces of art or acts of kindness that the flame-headed sorceress inspires in her listeners.