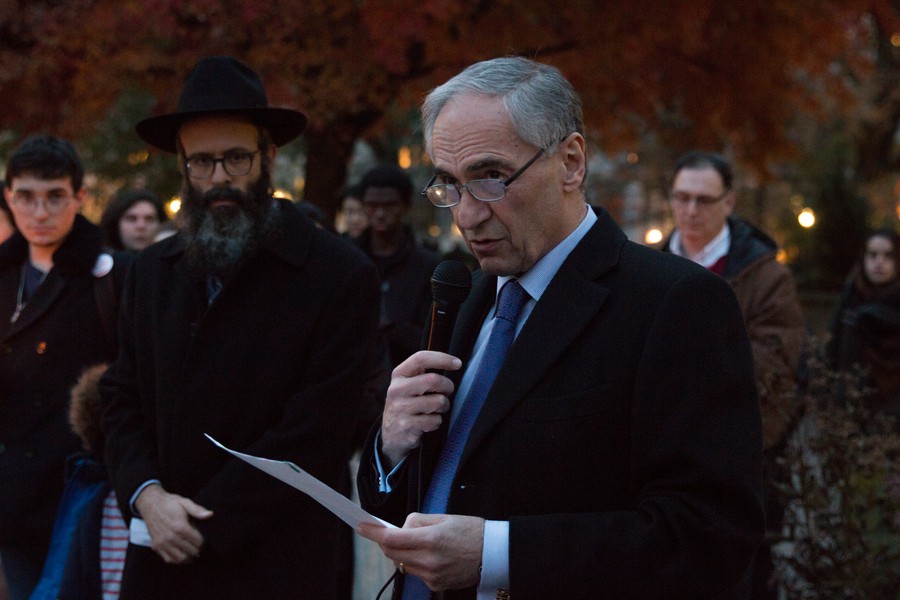 The Office of Spiritual Life, Hillel, Chabad, and Brent House organized a short candlelight vigil in the center of the quad Monday evening to reflect upon the shooting at Pittsburgh’s Tree of Life synagogue this past weekend, which left 11 dead.

See here for video coverage of the event.

Rabbi Anna Levin Rosen of Hillel, Rabbi Yossi Brackman of Chabad, and Reverend Stacy Alan of Brent House were all in attendance, along with University President Robert Zimmer. The service included a reading of the victims’ names, a short poem, and thoughts from the different religious leaders, with a short speech about processing the tragedy in Pittsburgh.

In his opening speech, Zimmer emphasized his hope that the values of discourse and inclusion could coexist in the wake of a hate crime such as this one.

“It is important that values of thought, discourse, inclusion, embracing of others, understanding difference, and acceptance of challenges and complexity are not allowed to be defeated by murderous acts of fear and hatred,” he said.

Brackman reminded the crowd that the shooting at Tree of Life is part of a nationwide trend of growing anti-Semitism that people need to fight against.

“On Saturday, we lost 11 family members—11 souls whose lives were gunned down in vicious hatred. What was their crime? Being Jewish. Classic anti-Semitism,” Brackman said. “Anti-Semitism is a cancer in society, one that good people cannot ignore. It must be called out for what it is, no matter its form.”

Alan from Brent House took the microphone next, reflecting on the shared roots of Judaism and Christianity and the historic and continued persecution of Jews by Christians despite this relationship. She also discussed the difficulty of when to speak versus when to remain silent about a Jewish tragedy as a Christian.

“The roots of my faith are deeply and inextricably intertwined with those of my Jewish brothers and sisters,” she said. “I am struggling with whether it is more important for me to speak or to stay silent—silence can be complicity, but speaking can be violence.”

Rosen closed out the speeches, noting that the weekend’s events had shattered the idea that the world was free of anti-Semitism for many people.

“It was a loss of a world we believed existed,” she said. “A world in which Jewish spaces were only places for celebration…for sacred communities to come together.”

Despite this, Rosen continued, losing the idea of a world where Jewish sacred spaces are not targets could spur the attendees of the vigil to make it a reality.

“We are a people of building and rebuilding…the world will be rebuilt by love,” Rosen concluded.

After the service ended, several circles of students continued to stand at the center of the quad with their candles, singing songs in Hebrew, English, and Arabic.