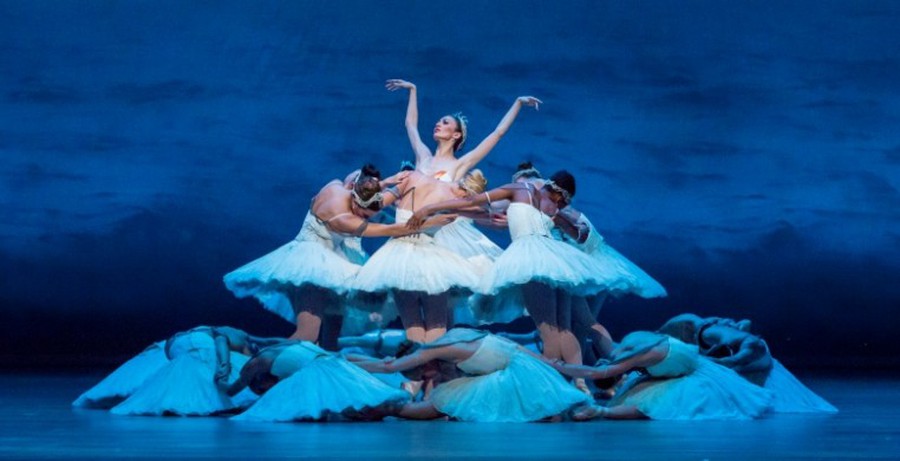 "Swan Lake" at the Joffrey Ballet

By Jade Yan   and Zoe Bean

Two years ago, Christopher Wheeldon collaborated with the Joffrey Ballet to set the Nutcracker in the South Side of Chicago, in the time of the 1893 World’s Columbian Exposition. Given Wheeldon’s experimentalism and background in contemporary dance, a modern take on Swan Lake also seemed certain—and it was. The classic ballet’s return to Chicago, where it last showed in 2014, began with a troupe of dancers preparing for a production of Swan Lake, and it soon became clear that we were watching a modern twist of the reality versus fantasy variety: In meta-fashion, the dancer playing Prince Siegfried (the ballet’s hero, who falls in love with queen Odette) is caught between the reality of preparing for a production of Swan Lake, and the fantasy world of the ballet.

While the ballet certainly did feel as if it were caught between two worlds, this unfortunately did not unravel in a good way. The zigzag storyline between fantasy and reality felt disorienting, and it was often unclear where we were in time and place. Although this mystification was also at play in A Midsummer Night’s Dream, the Joffrey’s last performance, this time it felt unintentional.

The first scene, which saw the performers chatting and dancing together in a rehearsal room with a barre and a big mirror, was elegant. But the scene endured for rather too long without making the adaptations “alternate universe” premise clear. The lack of the original Swan Lake storyline became slightly confusing and, as dancers moved to the side of the stage to make room for several neat solo performances, rather boring.

The niceties of the first scene may have been intentional, preparing for a dramatic sweep into the love and loss of Swan Lake, but this never happened. Instead, there was a slower filtering in and out of the two universes. The switch between fantasy and reality also distanced us from Prince Siegfried, his love, and his loss; at points, I was left feeling like I should have been more upset, like when villain Baron von Rothbart whisks Odette away from Prince Siegfried.

That being said, certain aspects of the ballet shone. April Daly was a wonderfully delicate Odette and a satisfyingly creepy Odile, smiling her way through her 32 fouetté turns. On Saturday’s matinee, in which Christine Rocas danced this demanding lead role, we experienced a less nuanced pair of swans. Rocas was expressive in her fluttering, coy interpretation of Odette’s swan-like movements, but her movement appeared less elastic. Her port de bras in arabesque, for example, were not as fluid as one might have hoped, considering this move is crucial to creating the illusion of the character as an ethereal, bird-like creature. In the third and fourth acts, however, her characterization was far more expressive. A series of rapid fire piques were strikingly adept, and followed by halting frappés that expressed Odette’s inner conflict and confinement.

Prince Siegfried, who had spent most of the first act classically walking around the stage, completely came alive during the banquet scene, executing impressive jumps and turns tirelessly. Miguel Angel Blanco danced the role on Saturday afternoon and was satisfyingly regal. His technique was as princely as his comport—he nailed his turns a la seconde, impressively remaining at center stage rather than drifting, as is often inevitable.

The solos during the banquet scene stood out like bright jewels against an otherwise dark, rich ballet. The technically difficult Danse des petits cygnes was also performed in perfect and satisfying synchronization. Although this is the iconic pas de quatre of the ballet, it was the “Spanish dance” that really wowed the audience. Anais Bueno danced more energetically and vibrantly with two partners than some dancers did with one, and managed to make a solo performed in character shoes rather than en pointe as mesmerizing as the ballet itself.

The costumes were bright without overshadowing the performance; the banquet scene made for particularly vibrant viewing, with dancers in colorful tights cavorting across the stage. And, finally, to eat my words slightly, my heart was indeed wrenched at the end of the performance when Prince Siegfried was left alone in an empty rehearsal room, looking disbelievingly around himself for Odette.