How to Trap a Demon: Oriental Institute Teaches Workshop 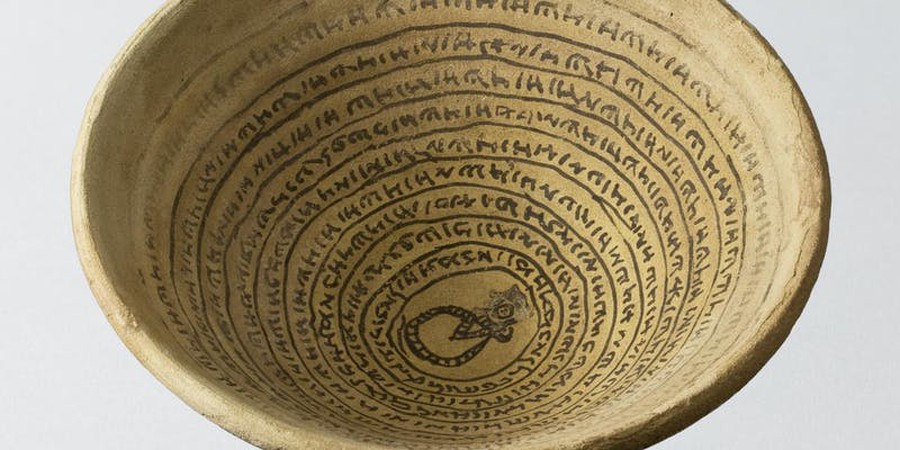 A bowl of the type used in demon-trapping in the Middle East during the sixth through eighth centuries C.E.

University and Continuing Education Program Coordinator Tasha Vorderstrasse led a workshop on the art of demon trapping at the Oriental Institute last Wednesday.

“Hopefully by the end of tonight, you’ll know how to [trap demons using bowls],” Vorderstrasse said. “You might think, ‘I know no ancient languages.’ Well, some of the sorcerers didn’t either and wrote in pseudo-script, so you know you can do this too!”

Vorderstrasse spent a large part of the workshop talking about practices where Jews, Christians, and Mandaeans during the sixth through eighth centuries C.E. used bowls to trap evil demons—the most straightforward method is drawing the demon on the bottom of the bowl, writing a spell around it and inverting it somewhere. Vorderstrasse also spoke at great length about the various magical systems that existed during this period.

The workshop began with an introduction of Pazuzu, the Mesopotamian king of demons. In pop culture, Pazuzu is known as the main antagonist of The Exorcist, but Vorderstrasse said that the mischaracterization of Pazuzu in the movie caused an uproar among researchers who thought that the protector demon had been greatly misunderstood. Vorderstrasse explained that Pazuzu was not only the king of demons, but also the demon upon which people called to destroy other demons. He prevented evil demonesses from causing the deaths of women and children, and protected against miscarriages.

Pazuzu was one of the first demons created under the belief that one could be both protected and menaced by demons. This belief led to the idea that demons are everywhere and that “your neighbors, your employers who don’t pay you, and everybody else are using demons to get at you.” Though Pazuzu could provide protection, the Babylonian people did not welcome Pazuzu at all: Vorderstrasse summed up Pazuzu and the Babylonians’ relationship as “we’re happy to have you, now please…stay away.”

Vorderstrasse also took the workshop to the Oriental Institute’s Megiddo exhibition, where she brought the group in front of one of the Dead Sea Scrolls. She described the scroll itself as “small and not particularly prepossessing,” but it did give researchers an interesting look into how religion and the magical rituals involved in demonic expulsion related to one another.

For example, the Bible itself was considered a form of protection against demons, and its contents made up chants that were used to ward off evils. “[Thinking] about the medieval church and witchcraft, this is the antiphrasis,” Vorderstrasse said. She went on say that within the Jewish community, while spells were written in Arabic and Hebrew and incorporated various elements of Jewish magic, they also referred often to Jesus, as well as other deities.

Dwelling on the topic of religion, Vorderstrasse raised a question: “There’s been some arguments that the people using these bowls might not have been Jewish necessarily...would they have characterized themselves in that way?”