Ben Howard Lets Chicago in on his Talent 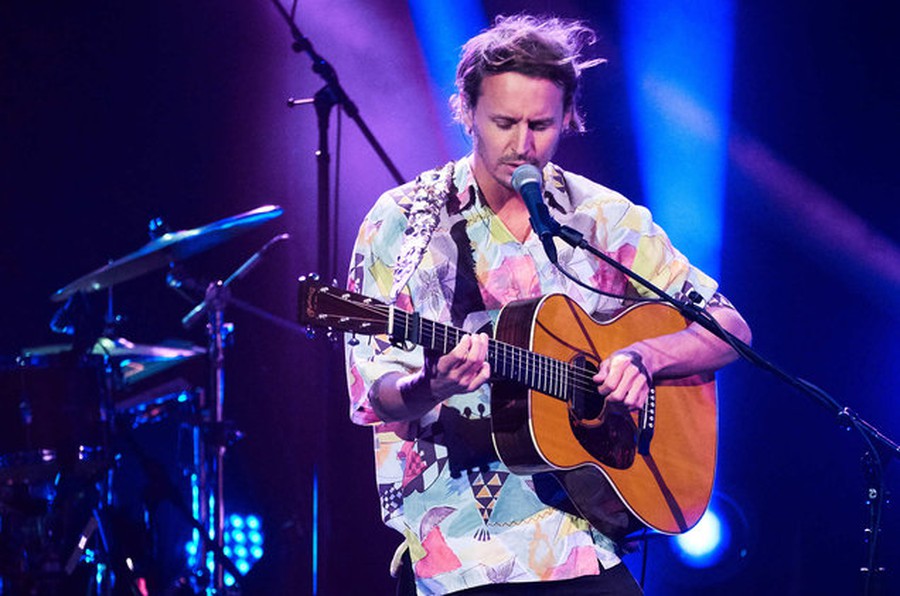 Upon entering the Riviera Theatre this past Wednesday for Ben Howard’s tour stop in Chicago, multiple drum kits, a plethora of synthesizers, microphones, and amplifiers crowded the stage. In contrast to the minimalist stage designs of most current concerts, the hectic aesthetic implied an important fact: this is a concert concerned with the music created by the gear, and not with the common performance spectacle of musicians dancing around the stage and climbing atop unused drum kits.

The original venue scheduled for Howard’s show was the Aragon Ballroom, but it was moved across the street due to low ticket sales. Yet something in Howard’s presentation on Wednesday and the complicated, layered tracks off his latest LP suggested that this was an issue of no importance to the British troubadour.

Wye Oak, Howard’s opener, stayed true to the concert’s primary focus on genuine music-making. With the guitar of frontwoman Jenn Wasner accompanying the rhythmically complex patterns of synths and drums, the band created a sound much greater than the three members on stage, and seemed more concerned with its meaning in the moment than with staying faithful to their recorded versions.

After the sudden success of his first album, Every Kingdom (2011) and his sophomore LP, I Forget Where We Were (2014), Ben Howard seemingly retreated from fame until the release of this year’s A Noonday Dream. Even more sparse than his output of music was his touring schedule, creating a mythos around the artist. It seems as if he is a musician who never wanted to achieve the fame of two Brit Awards and a Mercury Prize nomination. Instead, Howard is simply a singer-songwriter with a guitar and a unique talent for crafting lyrically and melodically intriguing songs, many of which make it big.

At Wednesday’s show, the audience was witness to that same guitarist playing those same songs as if he and his eight-piece band—including two percussionists and a three-piece string section—were in his living room: a glass of wine sat on a wooden table next to Howard’s array of synths for A Noonday Dream's “Towing the Line.” The singer sat down in a chair for a portion of the show while adjusting pedal configurations mid-song. At points, the bass and synth player to Howard’s left sat cross-legged on the floor, immersed in the music, as one would during a gathering of friends. It was clear that the music being made was, largely, for the musicians on stage. And while the various projections of live and prepared visuals were created with the audience in mind, they more functioned to transport the audience into the emotional state of Howard during the writing of each song than to create an atmosphere unique to this singular concert.

The setlist for the night was not focused on the songs that helped propel Howard to his fame. The set opened with A Noonday Dream’s “A Boat to an Island on the Wall,” its acoustic guitar turning electric with the introduction of a defined percussion pattern. The show saw only two songs from Howard’s previous LPs: the eponymous track from I Forget Where We Were and its opening song, “Small Things.” Both were slowed and stripped-down relative to their 2014 recordings. Again, it was obvious that Howard’s main interest was in performing music in a way that was most compelling to him, not his audience. At one point, Howard even left the stage while his band continued their faithful rendition of 2018’s “Murmurations,” calmly stating, “I’ll be back. Thanks, Chicago….” He did soon come back to the stage, making the entire situation feel like a natural progression of the concert’s preoccupation with creating the music itself—if a breather was needed, so be it.

Each song, regardless of popularity, was performed with commendable musicianship and execution. The two percussionists, surrounded by drum kits and an assortment of musical instruments seamlessly moved in and out of syncopated unison during A Noonday Dream’s “Someone in the Doorway.” Howard demonstrated his dexterous finger-picking technique on “What the Moon Does,” while the synths were beautifully thick on “The Defeat.”

In the end, keeping with the rejection of normal concert pretense, there was no encore. When Ben Howard ultimately left the stage, the show was over. And when the concert did end, it was clear every audience member was aware of Howard’s rare and unabashedly human musicality. It was a performance filled with authentic artistry, and we were all lucky enough to witness the band crafting music for the sake of music and themselves—a spectacle truly incredible to behold.