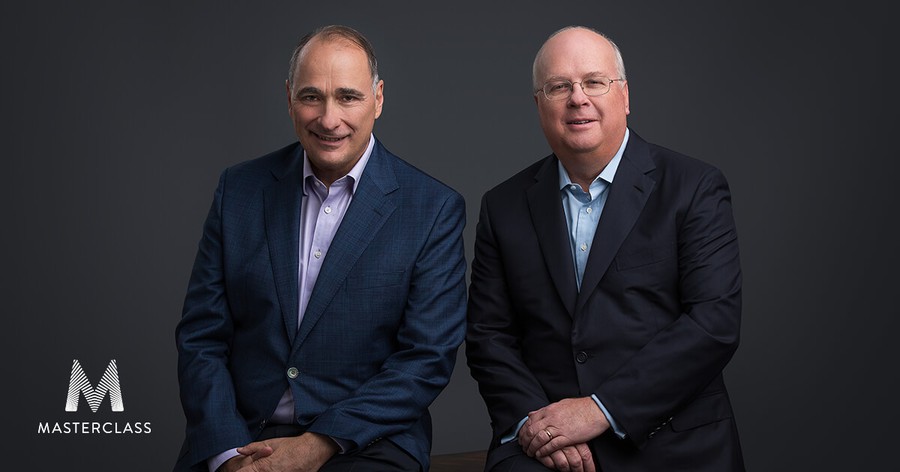 David Axelrod and Karl Rove team up to teach a MasterClass on "Campaign Strategy and Messaging."

MasterClass is an online education platform that offers courses often taught by celebrities in various fields. Instructors have included tennis pro Serena Williams, chef Gordon Ramsay, and journalist Bob Woodward. All classes are available as part of an annual subscription for $180, or for individual purchase at $90.

Masterminds behind Barack Obama & George W. Bush presidential victories, @davidaxelrod & @KarlRove, are not only champions of the democratic process but know what it takes to plan & execute a campaign strategy. Introducing a bipartisan class on how to win elections at any level: pic.twitter.com/IRpGdyrVDb

In a series of 24 video lessons, David Axelrod and Karl Rove delve into their personal experiences in politics and the nitty-gritty of effective political strategy and messaging. Per the MasterClass website description, the two “demystify the political campaign process and break down their philosophies on what it takes to plan and execute a winning campaign.”

Given their opposing party allegiances, the two form an unlikely partnership. Axelrod, the founder and director of the Institute of Politics (IOP) on campus, crafted Barack Obama’s presidential campaign message of “change” in 2008 and served as a senior advisor in the Obama administration; he also served as chief strategist for Obama’s 2012 re-election campaign.

Rove, meanwhile, served as a senior advisor in former President George W. Bush’s administration, and played a key tactical role in the 2003 invasion and subsequent war in Iraq.

In response to a Maroon request for comment, Axelrod elaborated on his partnership with Rove.

“MasterClass approached me and asked if I would be interested in co-teaching a class with Karl on campaigns. They wanted a campaign veteran from each party to teach what is a technical course on campaigns, not an ideological exercise. While Karl and I disagree on many issues, he is indisputably a master at campaigns and, therefore, a worthy partner on this project,” Axelrod said.

"It has never been more important to understand how this world of politics works and how to win the hearts and minds of voters," David Rogier, co-founder and CEO of MasterClass, said in a statement. “The class isn't about being a Democrat or Republican—it's about two of the best political minds of our generation teaching how to win elections.”