What My American Friends Don’t Know About Me

The way Americans at UChicago talk to international students reveals a deep and pernicious bias. 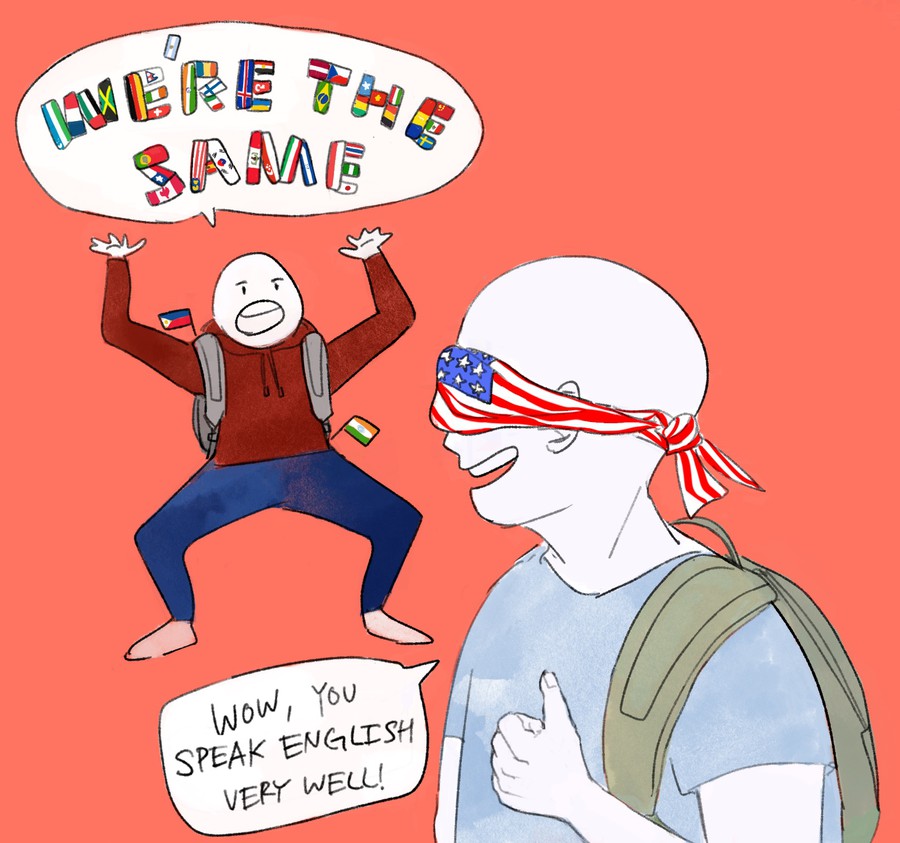 As an Indian who lives in the Philippines, I learned several new things after stepping onto U.S. soil for the first time last fall. Tipping is 15 percent. Having a near-5.0 score on Uber is not uncommon. Only one person should be in the compartment of a revolving door at a time—let’s say “someone I know” had an embarrassing moment. “How are you?” is a question that you will be asked endlessly and be expected to answer with “Good, how are you?” until the question becomes devoid of meaning.

A list of things I already knew how to do: Speak, read, and write in English. On more than one occasion people have told me, “You speak English so well!” No one had ever said that except for my loving mother, in response to my eighth-grade English teacher Mr. Burke giving me a bad grade. If I knew it was this easy to impress people here, I should also have mentioned that I know that red light means stop and green light means go.

After sharing stories with friends who are also international students studying in predominantly white, English-speaking countries, I realized that this form of cultural ignorance is commonplace and often goes unchecked. Friends of mine have been asked by their American classmates whether they took the SAT or knew about the American college application process. One met an American who was unaware of the existence of the Philippines, and one who thought it was in Philadelphia. Another was commended for not speaking with an accent and then asked to “do the accent.” These are obviously only anecdotes, but the apparent frequency of these comments is concerning. To deny the existence of such microaggressions would be shortsighted.

What makes me seethe the most about these moments is the difficulty many Americans have understanding that English is the primary language of instruction in countries other than the U.S. The country I live in was occupied by Americans for nearly 50 years. The primary language of instruction in many public schools in the Philippines is English, taught side-by-side with one of the local languages, depending on the region. The country I’m from, India, was occupied by a country with a passable grasp of English for almost 100 years. Why is it so surprising that I can speak English? Before I moved to the Philippines when I was eight and started attending an international school, I went to a public school where English was the primary medium of instruction. Granted, I was privileged enough to go to schools with great resources and cannot extrapolate the same standard for all the students in my countries of study. But the very fact that I now attend the same institution as you should give you a clue that I have received enough education to be here.

Americans who question international students about their understanding of English and the college application process might seem merely ignorant, but out of this guise slips a latent superiority complex. I respect the pride that Americans have for their country—we love our country where I’m from too. However, I draw the line when someone assumes another’s level of education is inferior solely because he or she went to school outside the U.S. True, there is a correlation between socioeconomic conditions and literacy rates in a country, and there are massive disparities in educational attainment across the globe. However, educational inequality exists in the U.S. too, as it does in countries regardless of where they lie on the spectrum of development. I don’t see you complimenting other Americans on their English proficiency.

When a student is unable to process that another student—at the same institution but from a different country—is equally capable, they reveal themselves to be insular, prejudiced thinkers. They call into question the validity of my presence as a student in this country. I did not go through some different, dumbed-down application process that turned a blind eye to my inadequacy in English. I wrote the same essays you did, struggled through the same application deadlines you did, and took the same tests you did. They’re called “standardized” for a reason. This attitude is deplorable and evidence of cultural ignorance that pervades this country on a much larger scale.

I believe America offers some of the best education in the world and has made prodigious strides in law, human rights, multiculturalism, freedom, and tolerance. When America learns, it engenders monumental change because the rest of the world is always watching. I hope that it can take the same strides to discard the cultural ignorance that stands in its way.

A friend of mine gave me some advice that I am morally obliged to pass on: The next time someone tells you that you speak English well, the only correct response is “Thanks, your English is pretty good too.”

Soham Mall is a second-year in the College.