Men's Soccer Advances to Third Round 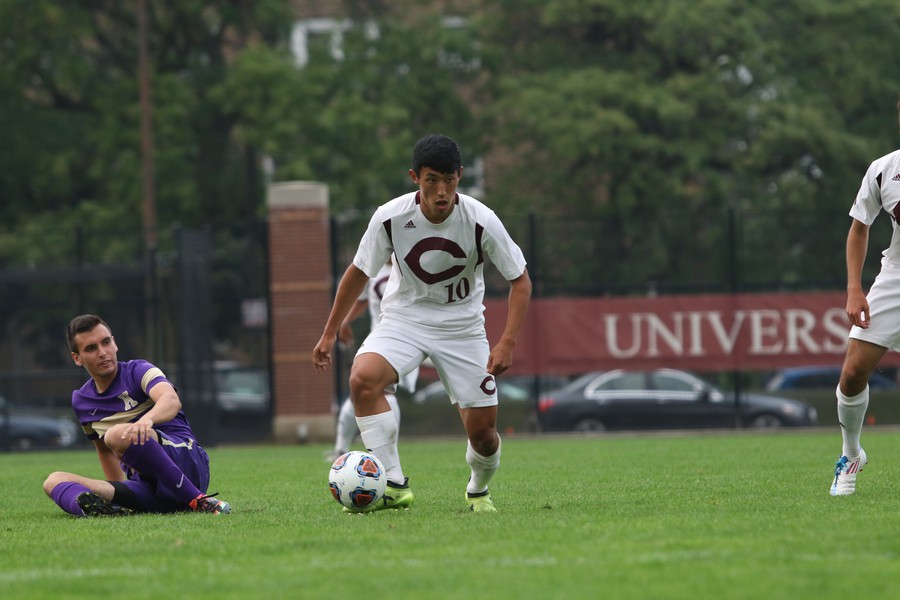 Fourth=year Matthew Koh looks to bring the ball up the field.

After a close and hard-fought victory against Carleton College, the University of Chicago men’s soccer team advanced to the third round of the NCAA tournament, where they will face off against Trinity University on Saturday, November 17. This will be the second time these two teams meet, after a 3–3 draw that went to double overtime in early September.

The No. 5 Trinity Tigers (17–1–3) faced a difficult path to advance this far, having played two games in two days. Nevertheless, they made easy work of their opponents, defeating both Chapman University and Mary Hardin-Baylor 3–0, in what amounted to their 10th shutout of the season. One advantage the Tigers have is the experience of playing long and grueling matches. Five of their matches in the regular season went to overtime, three of which went to double overtime. When you add that to the extra 90 minutes they played in the first round, it demonstrates the high stamina they possess and the ability to thrive in exhausting conditions. The Tigers are prepared to endure even longer if they need to and are confident in their capabilities since they have never lost a game that went to overtime.

Throughout the entire season, the Tigers conceded only 15 goals and scored a total of 76 goals. They are led by fourth-year forward Austin Michaelis, who has 12 goals this season, with four of them being game-winning goals. Trinity is a team that initiates the attack and puts pressure from the very beginning. In the first eight minutes of the game against Chapman, they already had three on-target shots, and similarly had four shots on goal in the first 17 minutes against Mary Hardin-Baylor. In both games, the Tigers combined to outshoot their opponents by a 43-25 margin. The defense has also played its role well by limiting the number of shots on goal each team gets. In total, the two goalkeepers combined for 61 saves this season, with the starter responsible for 56 of them.

The Maroons advanced to this round thanks to goals from third-year Dayo Adeosun and first-year Kyle Ruark, ending the 16-match unbeaten streak from the Carleton Knights. UChicago outshot their opponent by a 24–7 margin, with shots taken as early as the second minute. Ruark’s confidence has grown, considering his late-game heroics produced two game-winning goals in the final minutes of matches against Rochester and Carleton. The team had the opportunity to rest due to a bye week for the first round of the tournament, not to mention the fact that as hosts of this four-team sectional, they have the advantage of playing at home.

While fourth-years Matthew Koh (14 goals) and Max Lopez (13 goals) didn’t get on the scoresheet last game, the Maroons can always rely on anyone to step up and contribute. The Maroons scored a total of 44 goals this season. With 23 of them within in the first half, and 21 in the second half, the Tigers must be well balanced in playing both sides of the field; one mistake and the Maroons will make sure you don’t forget it. They only conceded 13 goals this season, in part due to the defense shutting out all attackers. Additionally, second-year goalkeeper Aaron Katsimpalis has made 69 saves to contribute.

If the Maroons advance to the sectional final, they will face off against the winner of Luther College and University of St. Thomas on Sunday, November 18.