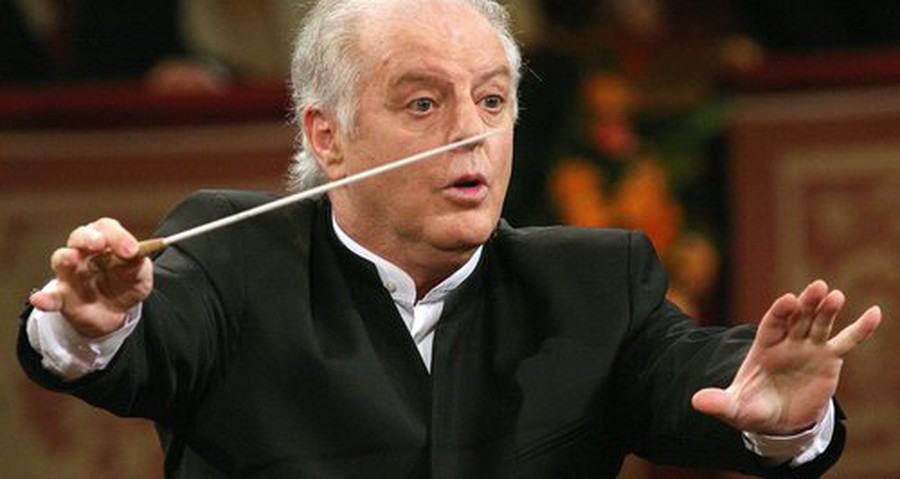 Twelve years ago, maestro Daniel Barenboim conducted his last concert with the Chicago Symphony Orchestra (CSO) as the ensemble’s music conductor. This week, he returns to Chicago to conduct a set of widely-anticipated performances with the West-Eastern Divan Orchestra and the CSO. In anticipation of those performances, he spoke at a roundtable discussion on Monday about his history founding and conducting the West-Eastern Divan Orchestra and his experience with the CSO.

Barenboim formed the West-Eastern Divan Orchestra with prolific academic Edward Said in 1999 as a way to connect passionate young musicians from countries in the Middle East. When the orchestra was first founded, Barenboim admitted that he was surprised by the reception: “There were 200 applications from the Arab world alone. I never dreamt of that. I had no idea whatsoever about the quantity nor the quality of the musical talent in the Arab world. And I have to say Edward Said, who knew everything about everything, didn’t know about that either.”

The ensemble isn’t simply known for its talent, it is also known for its cooperation between musicians from Israel and Arab nations despite strong political differences. Since its conception, it has received widespread media attention; in 2016, UN Secretary-General Ban Ki-Moon named it as a United Nations Global Advocate for Cultural Understanding.

Barenboim rejects the notion that the orchestra has a political motive and declares that it serves only to unite players through the shared passion of music. “I used to sit [a Syrian musician and an Israeli musician] on the same stand whenever possible. And what do you do? You tune to the same A, then you play the same bow, and you play the same phrasing, the same speed…six hours of rehearsal, trying to do the same thing with your archenemy. And then when it’s finished, you go and have dinner in the same room. I mean, after three days, of course you think differently about that,” he said. “Does that change everything? Of course not. But I think the power of the music is so strong that it makes every musician aware that they share the same passion with the other.” Barenboim does lament, however, the current conflicts in the Middle East and how it has had a negative impact on musicians wanting to be part of the ensemble.

Barenboim will be conducting Richard Strauss’s Don Quixote and Tchaikovsky’s Symphony No. 5 with the West-Eastern Divan Orchestra on November 5th at the Symphony Center. But that’s not all; from November 1–3 Barenboim conducts a series of concerts with the CSO. His CSO program features Bedrich Smetana’s Ma Vlast, a composition meant to evoke images of Czech culture and landscapes. In response to why he specifically chose this piece to conduct in Chicago, Barenboim gave a humorous response: “I asked to do the piece for three reasons. First of all, because I love the piece very much. Second, because I grew up with a recording of [the CSO] with Kubelik from the early ’50s. And because I want to conduct something I have not conducted…and believe me, that was not so easy.”

Barenboim also emphasized the importance of understanding a composer’s cultural background and language, as he believes there is a connection between a language’s pronunciation and the dynamics of a piece. “Don’t forget that each composer was born somewhere, and grew up in a home that spoke a certain language. And he thought and spoke and wrote in that language. And the music that he imagined is connected also to the language. This is why you have the heaviness of the German chords, because of all the German consonants.”

Having served as the music conductor of the CSO for 15 years, maestro Barenboim admits that he reminisces favorably about the ensemble. He declares that an orchestra’s capability is dependent on “musical ethic”: “If a conductor stops an orchestra in rehearsal in order to express a different opinion to what he just heard, he must be clear about it. This is the beginning and the end of the psychological relationship between the conductor and the orchestra. And Chicago, of course, was very special because it had…the most extraordinary ethic.”

The roundtable discussion concluded with Barenboim giving an emotional response on the state of musical education today. “Now you can be considered a cultured person without hearing a note of music,” Barenboim lamented. “The last 40 to 50 years, classical music has been divorced from the rest of culture. But you cannot be cultured without knowing that music.”

Barenboim will be guest conducting at the Chicago Symphony Center from November 1–5. Student tickets start at $9.

In a previous version of this article, Barenboim was quoted as saying, “I used to sit [a Syrian musician and an Arabic musician]" together, when the second half of the quote should actually say "Israelic musician."

This article previously referred to Barenboim as "chief conductor," when his title is rather "music conductor;" moreover, he has held this position for 15 years, not 7.