With Half-Baked New Characters, is "Bake Off" on the Decline?

Though charming as ever, the new judge and host team of "The Great British Bake Off" have trouble living up to those they replaced. 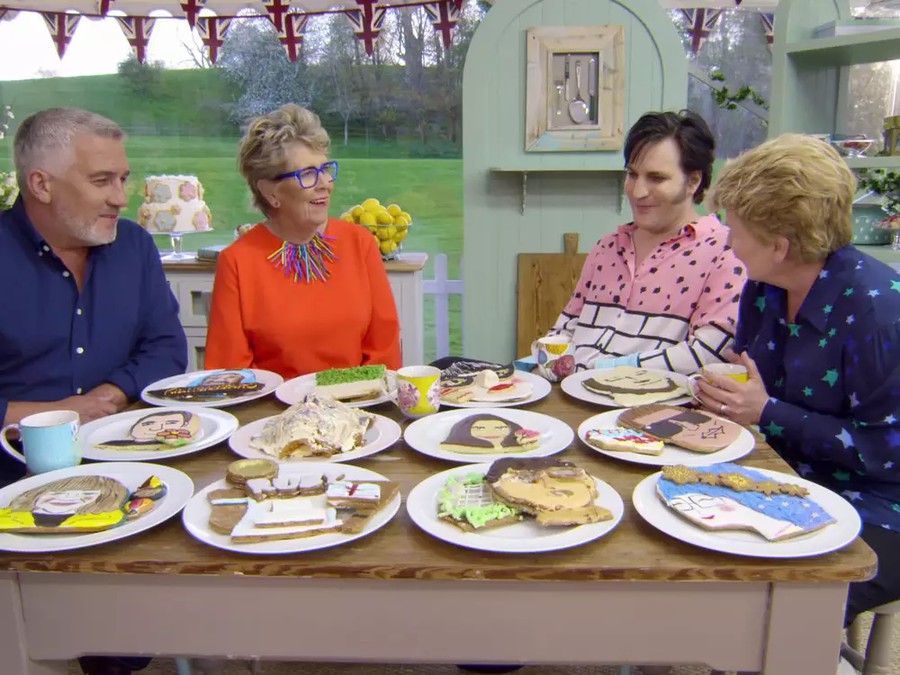 The Great British Bake Off’s strong suit has always been its unholy mashup of wholesomeness, kitsch, and innuendo. The ninth iteration does indeed deliver, but also finds itself haunted by the ghosts of Mary Berry’s past. Collection six of the Great British Baking Show, as it’s known in the U.S., reached Netflix in mid-November. For those not familiar, Bake off sees twelve extraordinarily British contestants bake competitively under a large white tent in the midst of a gorgeous country estate. And I mean extraordinarily British—between all the sweet treats and British smiles in the tent, an enterprising dentist could stand to make quite the fortune. Each week, the contestants participate in three thematic challenges meant to first test their tried-and-true signature recipes, then their technical skills in a nerve-racking test of baking intuition, and finally their ability to create a show-stopping masterpiece over the course of several hours. While the bakers may practice the first and third challenges at home, the second must be made with no prior knowledge and only a pared-down set of instructions. See the particularly enigmatic (and erotic) puits d’amour, which prompted one baker to exclaim, “I’ve never been in a well of love. I don’t even know what a well of love is!”

For any true fan, Bake Off’s strengths are in its charismatic and charming cast. Kudos in particular to the casting department, as this season’s contestants are as lovable as any in recent memory. Celebrity chef Paul Hollywood and restaurateur Prue Leith serve as the show’s judges, while second-time presenters Noel Fielding and Sandi Toksvig—a comedian, not a piece of Ikea furniture—do justice to the show’s traditional innuendo, as well. When contestant Ruby Bhogal bemoans, “I know size doesn’t matter…” Toksvig, who is a lesbian, quickly quips back, “You’re talking to the wrong person about size, dear.” Other fan favorites include amiable Welsh blood-deliverer Jon Jenkins, who wears flamboyant Hawaiian shirts, experiments in molecular gastronomy, and swears to never have heard of Claude Monet (it’s ok, Jon, neither have we). Other notable characters include the two handlebar moustaches sported by retired air steward Terry Hartill and banker Antony Amourdoux. This season’s most talented baker is Rahul Mandal, the human manifestation of imposter syndrome (“I’m not confident with anything happening in my life”), who seems to be deeply in love with the impossibly glamorous and French Manon Lagrève. What’s Bake Off without a little unrequited love?

Bake Off stalwarts will likely notice that Paul Hollywood’s become a little too fast and loose with his signature handshake. While Hollywood has always oozed a lecherous, Splenda-daddy-in-waiting vibe, his hard-won approval used to mean something. No longer. Fellow judge and Mary Berry-replacement Prue Leith certainly has a long cooking pedigree, but her aloof nature brings little fun to the show. One cheeky exception was directed either at a banquet pie or Hollywood’s pelvis: “It’s a monster sausage roll, isn’t it?” The judges mostly stick to the recipe, but, in an utterly unnecessary bid to stay relevant, they have added “Vegan Week.” Hollywood seems disgusted with himself as he gives a vegan handshake to the twee—but remarkably not insufferable—Kim-Joy for her animal-decorated vegan quiches.

Animal-themed vegan desserts aren’t the only irony of this year’s competition. Bake Off has always existed in a bizarre, a-colonial timeline where a baker can delight the judges with the merest hint of cardamom and Hollywood can lament that braided challah bread is going out of style. Week 6’s sweet and savory samosa challenge, leading to lovable Briony’s disastrous peanut butter cheesecake samosa, seems particularly blasphemous. *Bake Off*’s Britain is a land where everyone is quirky but no one is different. An old ma’amoul goes stale, and so perhaps cynicism is a natural part of watching something you love enter its ninth year. One finds Mary Berry’s “soggy bottoms” heartily missing and doubts that Sue or Mel would have ever had a blackface scandal like new host Noel.

Are the bakers less good? The shows less stopping? Or are we just getting older?  Is this the American way? To take something pure, something beautiful and inject it with the paranoia and competition endemic to our way of life? Or is this the British way? To run a once-formidable institution into the ground until its last corgi has died and the world is just waiting for it to croak?

But don’t worry, it’s not as bad as all that yet. I found this season to be far more enjoyable than the last, suggesting the new configuration just needs to find its way without the technicolor grandma wardrobe of Mary Berry and sweet banter of Mel and Sue. This season’s winner (no spoilers) is one of the most deserving I can remember and the losers unflappably gracious.

Besides, one watches Bake Off to forget about the unfavorable odds of our own blighted existence. This season allows us to do just that.