Flores gave a talk about his paper on "social illegality" last Wednesday. 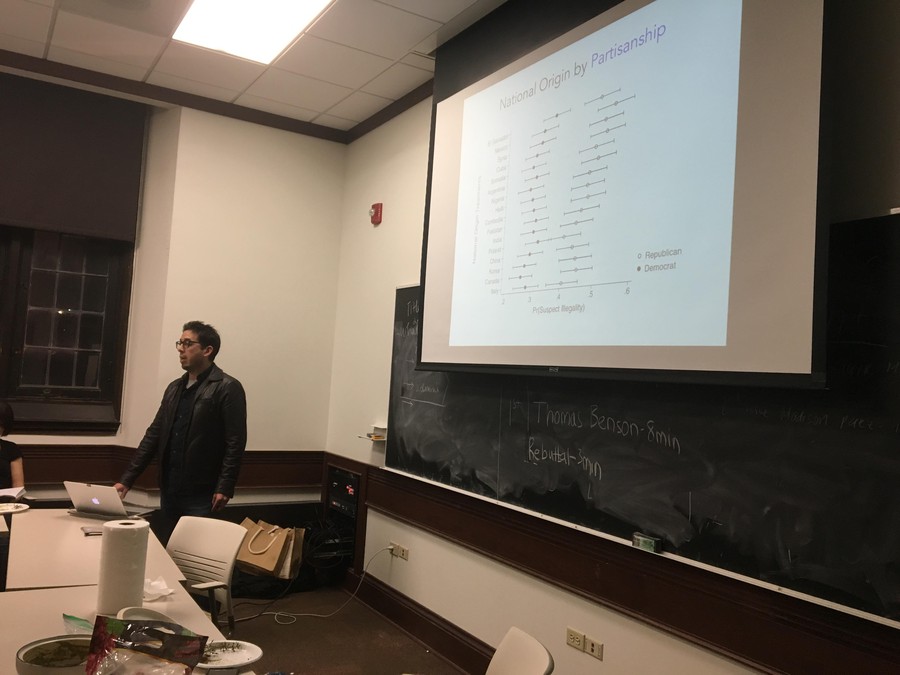 Flores wrote the paper with Ariela Schachter, an assistant professor of sociology at Washington University in St. Louis.

Deeply entrenched American stereotypes about what makes someone “illegal” don’t match the reality of undocumented immigration to the United States, argued assistant professor of sociology René Flores in a talk titled “Who are the ‘illegals’?: The Social Construction of Illegality” hosted by New Americans UChicago (NAUC) last Wednesday.

NAUC is a community service RSO that brings students together with Chicago residents to help them prepare for the U.S. citizenship test.

The president of NAUC, fourth-year Danielle Schmidt, told The Maroon that the group designated Flores as its fall speaker because the group wants to engage with him and his research on immigration.

During his talk, Flores focused on the findings from his recently published article on the subject, which he wrote with Ariela Schachter, an assistant professor of sociology at Washington University in St. Louis.

“We have to keep in mind that [‘illegals’] is a pejorative term, a term that could hurt people in their communities,” he said, “but nevertheless, we think that it’s important for us, as researchers, to understand: What do people mean when they say ‘illegals’? What are the cues, the triggers, the traits that trigger this term of illegality?”

“Put yourself in their shoes; you were born in Texas, you have a U.S. birth certificate, you have a U.S. passport…and one day, you try to renew your passport, and you get a letter from the State Department saying you can’t renew your passport; [saying] ‘we actually think you might be undocumented’.… Think about the consequences [of that] for your identity, for your own capacity to live your life,” Flores said.

According to Flores, illegality, as created by laws set forth by nation-states, is a complex condition. “This [illegality] is not something that’s intrinsic to you, but as you move across different national borders, certain bodies are classified as legal or not legal; particularly [one’s] status [as documented or undocumented] may actually change across time.… You may actually gain more or less political rights according to the area where you are,” Flores said.

Flores posed the question of whether “illegality” can also be created by social stereotypes.

Other than the implications this has for people who are stopped by ICE agents or at border patrol checkpoints, Flores said, this notion of “illegality” matters on a societal level. If people consider someone around them to be illegal, then they might discriminate against that individual.

“Common observers, when they judge other persons…. We think that they’re doing it on the basis of stereotypes, not on the basis of documents,” Flores said, “and this happens regardless of [the] actual documentation that people have.”

In an experiment meant to uncover the stereotypes that people assign to undocumented immigrants, Flores and Schachter asked a nationally representative sample of test subjects to look at the profiles of two fictional immigrants, with several randomly varied traits listed for each: nation of origin, profession, age, English proficiency, and more.

Before sharing the study’s results, Flores asked attendees to guess which factor they think plays the most important role in predicting perceived illegality. One attendee guessed English proficiency; another wondered if it was national origin. (To that, Flores commented that the broader national discussion has certainly associated illegality with Latin American origin.)

The results, Flores said, showed that nationality played a major role. The nationalities most commonly suspected of belonging to an undocumented individual were, in order, Salvadorian, Mexican, Syrian, and Cuban. Among the least suspected nationalities were Italian and Canadian.

The fictional individuals who were more educated and who received more government benefits were viewed with less suspicion by those surveyed.

But the factor with the strongest effect on a respondent’s perception was whether the fictional individual had a criminal record. Fictional individuals in the study said to have committed crimes such as murder and rape (as opposed to minor infractions such as jaywalking) corresponded to more suspicion of being undocumented.

“What we’ve shown here is that, despite the fact that this goes against the direction of reality, because we know that immigrants commit fewer crimes than natives, in the minds of people, illegality and criminality are becoming one,” Flores said. He added that he and Schachter think political rhetoric is affecting how people generally view immigrants.

A subsequent question in the research explored whether people would call the authorities on an individual they suspected was undocumented. Flores said that people were most likely to call authorities if someone they thought was undocumented was seeking to live or work near them.

Flores said he and Schachter found that other traits of immigrants that would trigger perceived illegality include youth, poor English ability, and recent arrival to the U.S.

“Many of [these perceptions] go against the direction of reality.… This is important because these perceptions may drive public policy debates and public opinion,” Flores said. He added that they could also cause inequalities in medical care and other services.