In No Mood to Connect

Responding to relatable situations, online and off, with “mood” is more popular than ever. But is such a simple word the best way to respond to complex situations? 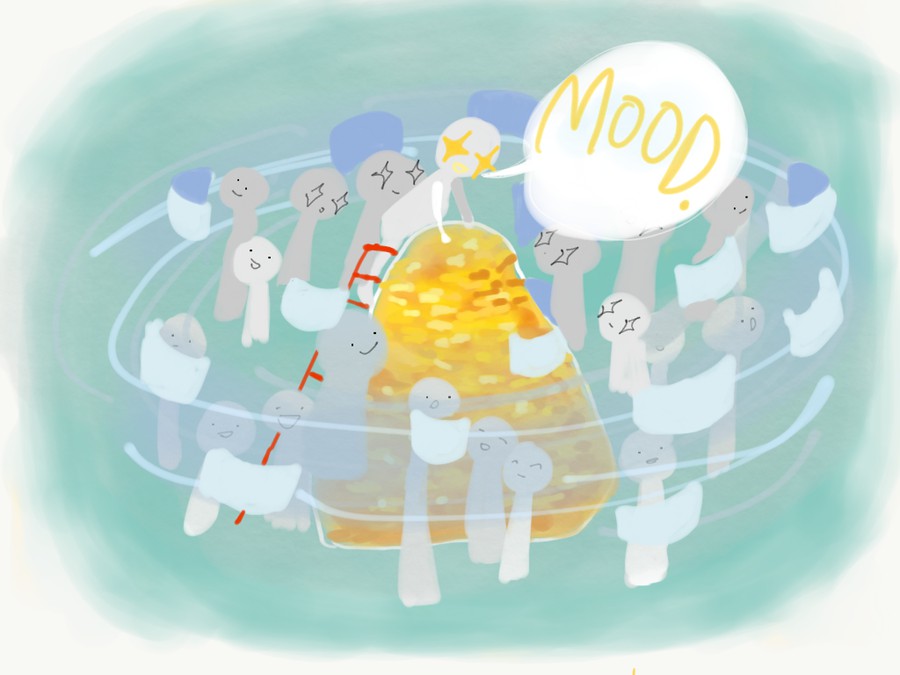 A papier-mâché Michael Jackson with a red leather jacket and a sinister painted smile? Mood. Janet from The Good Place excusing herself to “go to my void for a little while?” Big mood. Oprah hefting up an enormous basket of freshly harvested produce? An entire mood. “Mood” has become the great equalizer of content: Anything and everything can be a mood, both online and off.

Unfortunately, the word "mood" has morphed into something more damaging than a way to appreciate Michael Jackson sculptures. Online, the word made sense, but when used conversationally, “mood” is like a fish out of water—it adds little to conversation and serves only as a way to dismiss people.

At its conception, people used “mood” to define themselves online. “Mooding” emo Janet, like above, is in an effort to appear as a particularly edgy fan of The Good Place; “mooding” fruit-laden Oprah shows you revere her and her gardening (or that you can’t wait to live out your agricultural dreams). There’s a sense of implicit ownership here—to “mood” is to say this is my mood, this is how I’m feeling, how I’d like to be perceived.

On the Internet, there's a place for this. Given there’s an overwhelming amount of digital content available to us, “mooding” has evolved as an efficient means of panning for our own personal gold. It allows us to quickly sift through content and denote what we think is representative of ourselves. This isn’t as introspective as it sounds, because “mooding” is much more about data-processing than analysis. After I “mood” an image of Kermit the Frog huddled in a bathtub, for example, I’m not then going to spend time considering why this particular image spoke to me. I’m also not going to start a conversation by forwarding it to a friend captioned with “Mood! So what are your thoughts on this?” “Moods” are about efficiency, about claiming pieces of the Internet for your feed only to immediately abandon them in pursuit of more. What “moods” are not about is stimulating discourse, and this is what makes them so useless in real life.

As an example, imagine a person at the farthest possible end of the “mood”-use spectrum. This person (we all know at least one) meets seemingly everything they hear with an emphatic “mood!” This can be vaguely funny in more lighthearted contexts, but there comes a point when it’s extremely frustrating. Even basic conversations require some back-and-forth, some question-asking, some idea expansion. When every sentence you say is met only with “mood!” it feels more like being retweeted in real life rather than actually being heard.

And sometimes there are conversations that need to be had rather than dismissed. Take, for example, a certain type of post in the UChicago Facebook meme group. Anything along the lines of “UChicago gives me depression” is guaranteed at least a few “moods” in the comment section. While there is something to be said for validating people’s experiences, comments like these don’t exactly open the door to further discussion about the poster’s wellbeing or the underlying issues with our school.

This is the dismissive sentiment that “mood” carries over into real life, as ingrained as it is in our vocabularies. If someone were to say, “Wow, I just slept through my class. Fifth time this week!” it only takes a “mood” to shut down what could have been a more lengthy conversation. "Mooding" is innately self-centered, and the effects of this in real life have equally real consequences. If a person's need to "mood" someone else's feelings is paramount to checking in with that other person, this can put a strain on relationships and leave people feeling unheard.

Because we lack a distinct boundary between the vocabulary we use on and offline, there is and will continue to be a bleedover from Internet slang for the foreseeable future. Although “mood” seems to be the word of the year, no doubt it will soon be replaced, and we will be faced with the similar challenge of using an Internet-transplant in daily conversation. There’s no reason to try to excise “mood” entirely from our collective vocabulary, just to be more thoughtful when using it on an individual scale. Be conscious of when you use the word, consider the effects it may be having on your conversations, and readjust. Self-awareness? That’s a mood.

Maya Holt is a first-year in the College.