“We’re going to be identical to all the other fraternities, but with more pressure on us,” a new member told The Maroon. 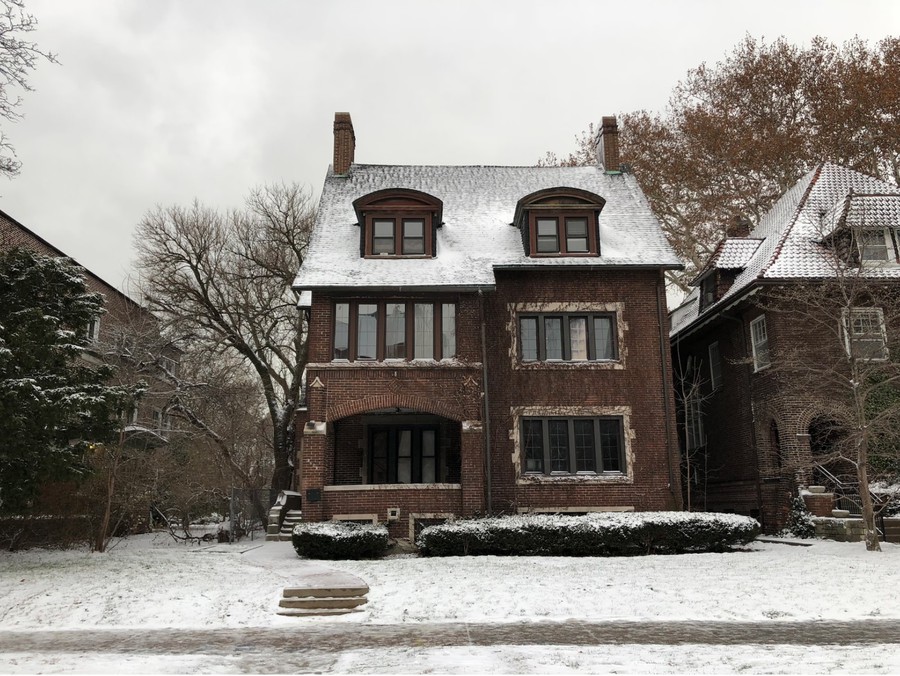 The house at 5625 South University Avenue will get a more than $1 million renovation.

Phi Delta Theta (Phi Delt) returned to the University of Chicago this fall, and the chapter is in the process of growing its membership while the fraternity house, located on 5625 South University Avenue, awaits a million-dollar-plus renovation.

Students and representatives of the national organization say the chapter is starting fresh, trying to be an upstanding fraternity. The Phi Delt chapter went dormant for years in 2016 after a hazing incident. On induction night in 2015, pledges were served grain alcohol, then held in a basement room as part of an initiation ceremony. The events resulted in a $250,000 lawsuit in which Dylan Kanaan, a pledge who sustained significant injury, alleged that he was singled out and beaten by fraternity members. A September 11 court document shows that the lawsuit ended in a settlement, the details of which are confidential.

In January 2016, the chapter began the process of “recolonization,” suspending Phi Delt’s presence on campus until all students who were members at the time of the incident have graduated. Following the graduation of the Class of 2018 this past spring, the fraternity began recruiting members for a new colony this fall.

But the process of recolonizing has not been so smooth: Phi Delt has already removed multiple founding members due to reports of alleged sexual misconduct.

The Maroon learned that at least two students, who previously signed invitations from the organization’s national representatives to become "Founding Fathers," had their letters rescinded after Phi Delt representatives became aware of reports that they had committed sexual misconduct, according to multiple founding members. A Phi Delt representative confirmed that they removed these two students, whom The Maroon will not name due to limited information about the reports.

Holmes discussed the application process for its “Founding Fathers,” the students who will form the first pledge class of the new chapter. The chapter ran advertisements on social media to generate interest, which prompted applicants to submit a form containing contact information. Applicants were then interviewed by both Holmes and Norrie.

Norrie elaborated upon the selection process. “It’s completely based on what you’re looking to get out of your campus or your fraternity experience,” he explained. “So, if I sit down with someone who’s looking to join Phi Delt because they want to throw a rager and ‘frat it up’ throughout their college career, they’re probably not the right fit for the group. We really look for guys who are a little bit more driven than that and want to get more out of their experience than just the social aspect. So that means the community service, the philanthropy, the leadership.”

When asked for information about the recruitment process, the Founding Fathers interviewed by The Maroon declined to comment.

As of November 7, Phi Delt said it had received interest from around 90 applicants, 38 of whom were invited to join. Phi Delt’s plan is to cap the number of founding members at around 50. Since the start of the quarter, around two to three students have been joining the new chapter per week, according to a founding member. The fraternity has been meeting on campus at 7:30 p.m. every Thursday.

Norrie said the fact that UChicago, unlike many other universities, does not recognize Greek organizations made the selection process challenging, specifically mentioning his inability to access information about whether applicants have had disciplinary cases with the University.

“Here at the University of Chicago, the Greek life is completely separated from the University,” he said. “At a school with a lot of support for Greek life, we would be able to go to the fraternity and sorority life advisor and say, ‘Hey, can I have a list of your members? Can I see their GPAs? Can I see their past histories on school for violations of misconduct and whatnot?’ There’s no relationship with the University here, so we have to do that all ourselves.”

Cracks in the System

According to a founding member, every prospective brother was asked two questions during his interview: “Were you previously in a fraternity?” and “Have you ever had a Title IX case against you?”

However, this information is self-reported. Some founding members were removed when the fraternity was made aware of allegations against them.

He denies that he was ever a member of Phi Delt, saying the fact that he didn’t ever pay dues means he wasn’t technically removed. Holmes confirmed that the student was removed, noting that he had signed the invitation to join, which was then rescinded.

The other removed student said in a message, “To my knowledge I dont have any title IX complaints against me…. I was kicked from phi delt for ‘sexual misconduct’ less than a week after I joined, and I still dont know why. I just got an email out of the blue that I was out. I don’t know what I did but I would really like to work it out with anyone who has a problem with me.”

A Frat House to Call Home 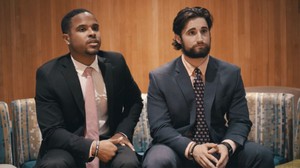 Two Phi Delt expansion consultants make a pitch for joining a Phi Delt chapter in a recruiting video for the fraternity.

According to Norrie, more than $1 million will be spent on the house renovation, funded by the Walter B. Palmer Foundation, the financial capital and investment arm of Phi Delt. When the house completes its renovation, a “resident master,” likely a Ph.D. student, will live alongside the brothers and be responsible for enforcing the no-alcohol policy, according to a founding member.

The fraternity house is currently undergoing renovation and will not be available to the brothers until the 2019–20 academic year. It has remained unoccupied since its closure following an investigation into the hazing incident.

At the moment, there are no social events. There is discussion about an event occurring in the spring, although it is more probable that social gatherings will commence next academic year, when the house becomes available, a founding member said.

The Future of Phi Delt

Asked how Phi Delt plans on earning back schoolwide trust after the events that resulted in the shuttering of the chapter, Holmes said, “The first thing that we’re trying to create is a fresh start. With the exception of our name, there is no prior affiliation with the previous group.”

He discussed current reforms and programs intended to complement the recolonization process, highlighting three initiatives of the organization: alcohol-free housing, an anti-hazing policy, and the Fraternity Health and Safety Initiative, which encompasses bystander intervention and preventing sexual misconduct. These initiatives are formally in place at all Phi Delt chapters, including the former Phi Delt chapter on campus. Alcohol-free housing, in particular, is a widespread policy that is widely flouted by fraternities nationally.

When pressed for specifics on new or unique programming given the chapter’s previous history at the University, Norrie reiterated the importance of enforcing the aforementioned initiatives and declined to elaborate further.

“All the new members are different. We’re starting this group in a new generation of Phi Delt,” he said.

At least one new member has a formal tie to the old chapter: Founding Father third-year George Reuter is the younger brother of Nick Reuter (A.B. ’18) who was a member of the original Phi Delt chapter at the time it was shut down. George Reuter declined The Maroon’s request for comment.

“When we start the group from the ground-up with those values, we find that these groups are very successful and they really fit into 2018 a lot better than the other organizations. None of the Phi Delt colonies built within the last ten years have been shut down. They’re all doing quite well,” Norrie said.

In an interview, founding member Gage Bayless, a second-year, stressed the importance of regaining community trust.

“Everyone that joined is aware of the fraternity’s past. But the fact that it happens to be named Phi Delt is, for all intents and purposes, 100 percent a coincidence. Nothing from this frat that we’re starting up is similar [to the old Phi Delt] in any way. That said, we already know that we’re going to be on everyone’s radar,” Bayless said.

“We’re going to be identical to all the other fraternities, but with more pressure on us. That means we have to act all the more responsible…how an ideal frat should look. I think the pressure is going to push us more towards that ideal.”

Bayless also suggested the creation of an oversight board with members from other RSOs on campus, such as the Organization of Black Students, MEChA (El Movimiento Estiduantil Chicanx de Aztlan), and UChicago United, along with a brother from Phi Delt. He said the idea has been previously discussed with a small group of other members, albeit not yet with the full fraternity.

He criticized internal fraternity oversight and investigations as ineffective. “I’m calling DU [Delta Upsilon] out,” he said, although he did not elaborate further.

Bayless said, “In other colleges where fraternities are recognized, the colleges themselves have oversight boards and a hand in risk-management…. All other RSOs have oversight,” he told The Maroon.

Bayless was unsure of future plans for the fraternity. He added that the induction process has not yet started, since the full fraternity will officially launch in the spring.

There will be eight members on the executive board and 15 lower-tier leadership positions, which include roles such as parents’ club chair and intramural chair. However, no executive board has been established yet, for the new chapter remains in the recruitment phase. The “men of the colony” will apply for the positions, providing résumés and partaking in formal interviews with Norrie and Holmes, who will then make the selection.

In response to a Maroon request for comment, second-year Alexander Qu explained his decision to be a part of the new chapter: “I wanted to be a part of a fraternity where individual personalities could thrive and we could work together to become something larger than ourselves.”

Second-year Alec Gleason commented on his decision to join Phi Delt in spite of its former history in an e-mail to The Maroon. “Although Phi Delt has earned a negative reputation over the last few years, I feel nothing that has happened in the past defines what will become of the new fraternity,” he said.

“We join the scene with positive ambitions. I joined Phi Delt with the intention of collaborating with my friends and peers to work on projects that can bring us closer together in the stressful school environment. The first project will involve bringing the fraternity under an encouraging light while also providing the opportunity for me to get to know my colleagues better and form relationships that will last for life.”

Phi Delt Is Back

The chapter went dormant for years after a hazing incident.