The Coalition filed a petition for a referendum on the ordinance on Monday. 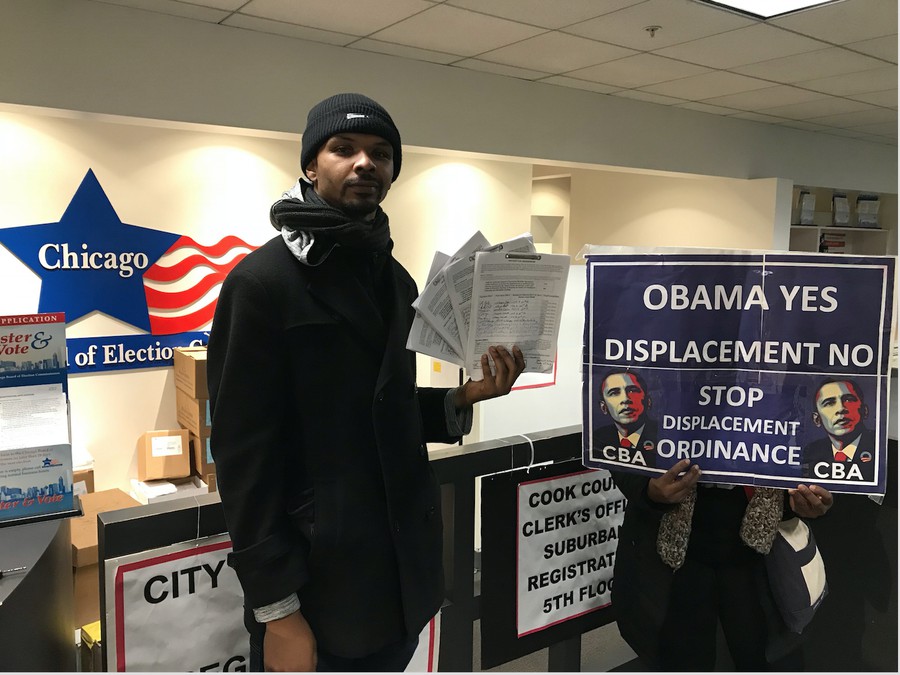 Devondrick Jeffers, an activist with the CBA Coalition, submits the petition.

In February, many Chicagoans will vote on a long-contested issue regarding the Obama Presidential Center (OPC).

The community benefits agreement (CBA) Coalition, the activist group that has long demanded a CBA ordinance for the OPC, submitted a petition on Monday to put the ordinance to a nonbinding referendum vote on the ballot for city elections. Residents of the Fifth Precinct of the Fifth Ward and First, 22nd, and 23rd Precincts of the 20th Ward will be voting on the referendum.

The CBA ordinance would bind the OPC’s developers—the City, the Obama Foundation, and the University of Chicago—to certain requirements such as employment opportunities, affordable housing, and transportation initiatives intended to prevent local residents from displacement.

Although the referendum is nonbinding (even if it gets passed in the February elections, City Council is not required to pass the ordinance) it reflects a continued effort by many residents near the OPC to ensure that they are not displaced from their communities.

In recent weeks, many residents of Jackson Park, where the OPC will be located, have persistently shown their support for the ordinance’s passage. Most recently, activists participated in a rally organized by the Obama CBA Coalition, in which two protesters were arrested.

Activists argue that the OPC poses a great risk to local residents by inflating rents and raising taxes, by potentially erasing significant components of the culture of the South Side, and by causing emergent issues accompanying gentrification.

“I’ve lived here 38 years,” wrote Sharon Payne, a long-term resident of Woodlawn, in a post on the Coalition’s Twitter page. “We can’t afford to lose our places to live because people get greedy.”

The Ordinance—written by South Side residents, NGOs, and student groups at the University—is not the Coalition’s first attempt to work with City Council and the Obama Foundation to implement its list of requests. They’ve protested in front of aldermen’s offices and at City Council meetings.

Former President Barack Obama said last year that the Obama Foundation would not sign the CBA, because he thinks it could not be inclusive enough to represent all the interests of the community.

He additionally suggested that, since the Obama Foundation is a nonprofit, the CBA as a private legal document between the OPC and the Coalition would be the incorrect form to pursue the issues raised, as benefits agreements are geared to private, for-profit organizations.

This pushback, and refusal to sign the CBA, by the Foundation has forced the Coalition to pursue change publicly, seeking implementation of the CBA ordinance via referendum.

“Short of an aggressive intervention in housing policy today, the neighborhood is facing the displacement of nearly half of its current residents. So we feel the urgency of now to do something,” he said. “We hope that the ordinance will contribute to ensure that long term residents can stay and benefit from the development happening in the community.”

Second-year Claudia Yanos, a co-leader of UChicago for a CBA, said a referendum vote is important, because, if voters are in favor of the ordinance, “it’s a way to tangibly show that people in the community want the ordinance implemented. It says much more clearly that the city’s residents supports and is much more behind [the CBA]. This also helps to get more people talking about it.”

Clifford Helm, a lawyer for the Chicago Lawyers’ Committee for Civil Rights, said that, although the referendum is nonbinding, it can still “be used as a tool moving forward for implementation.” The Chicago Lawyers’ Committee is an ally member of the Coalition, meaning they participate in Coalition meetings and offer legal advice as necessary. They similarly offer expertise on issues of Chicago policy and processes.

Aside from the ordinance, the Coalition is taking other significant measures to raise awareness on the issue, Goldenberg said. Members of the CBA are planning a forum for candidates for the 20th Ward and are working with the urban planning department at the University of Illinois at Chicago on a study regarding displacement in Chicago.

“That’s the kind of organizing that we do: to build the leadership of local people so they can stay in the neighborhood and thrive,” Goldenberg said.

By Elaine Chen and Miles Burton

The vote is nonbinding, meaning that City Council will not necessarily pass it or consider it on the floor.