When Do We Listen to the Kalven Report? 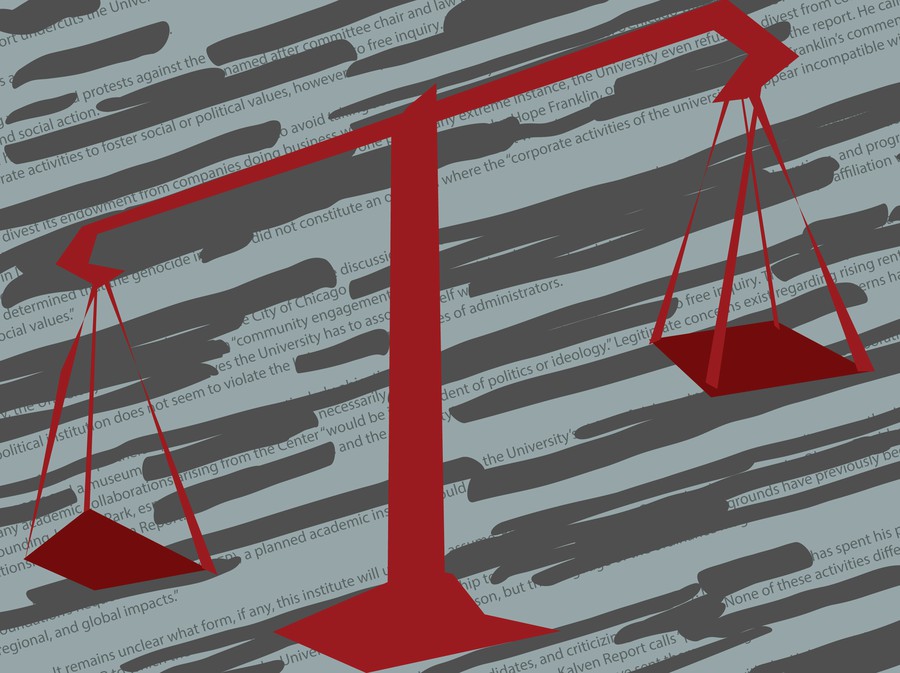 In 1967, following widespread protests against the Vietnam War, the University of Chicago commissioned a faculty committee to draft a policy on the University’s “role in political and social action.” The Kalven Report, named after committee chair and law professor Harry Kalven, discusses the University’s ability to take political stances and how this may conflict with the University’s commitment to free inquiry. It concludes that there is a “heavy presumption against the university... modifying its corporate activities to foster social or political values, however compelling and appealing they may be.”

University administrators have often relied on this report to avoid taking action on politically contentious issues. The University was one of only a handful of universities to refuse to divest its endowment from companies doing business with apartheid South Africa. More recently, the University has cited the Kalven Report to justify its refusal to divest from the world’s largest fossil fuel companies. In one particularly extreme instance, the University even refused to divest from companies doing business in Darfur during the genocide in that region, over the objections of professor John Hope Franklin, one of the original authors of the report. He called the situation “so tragic that it qualifies as the exceptional instance where...divestment is consistent with the core values of our report.” Despite Franklin’s commentary, the University determined that the genocide in Darfur did not constitute an occasion where the “corporate activities of the university…appear incompatible with paramount social values.”

One contemporary issue that has sparked surprisingly little discussion of the Kalven Report is the debate over the Obama Presidential Center, slated to be built in Jackson Park. The University, along with the City of Chicago and the Obama Foundation, is one of the three leading partners on the Center’s construction. Specifically, the University has been involved in “community engagement, planning and development, individual and institutional collaborations, and programming.” Given the reputational and financial incentives the University has to associate itself with this new landmark, it is convenient that the University’s affiliation with this deeply political institution does not seem to violate the Kalven Report in the eyes of administrators.

On its face, this partnership does not seem particularly objectionable, at least on Kalven Report grounds. While former President Barack Obama is a Democrat, a repository for his papers and a museum about his time in office isn’t necessarily in conflict with the University’s commitment to free inquiry. The University has also pledged that any academic collaborations arising from the Center “would be independent of politics or ideology.” Legitimate concerns exist regarding rising rents in the area surrounding Jackson Park, especially given the Foundation and the University’s refusal to sign a community benefits agreement, but these concerns have little relationship to the Kalven Report.

Obama’s vision for his library, however, is far more expansive than the University’s vision of civic partnership and academic collaboration. In the Foundation’s Request for Proposal (RFP), a planned academic institute would act to “enhance the pursuit of the President’s initiatives beyond 2017 and have local, regional and global impacts.”

It remains unclear what form, if any, this institute will ultimately assume. Regardless, this language was used in the city ordinance authorizing the Center, in the specific Request for Proposal (RFP) to which the University responded, and in a lawsuit from the advocacy group Protect Our Parks objecting to the Obama Presidential Center on First Amendment grounds. General concerns about the University’s relationship to the Obama Center on Kalven Report grounds have previously been raised in the pages of The Maroon, as well as in comments by University professor Charles Lipson, but the language of the ordinance magnifies these objections and demands a response.

It is impossible to disentangle this institute’s goals and the former president’s distinctly progressive legacy. Obama has spent his post-presidency raising money for the Democratic Party, endorsing hundreds of Democratic candidates, and criticizing Donald Trump. None of these activities differ from the usual initiatives pursued by other former presidents. They do, however, clearly constitute what the Kalven Report calls “political fashions, passions, and pressures.” If the University is serious about avoiding such fashions, this language in the RFP and the ordinance should have sent them running.

I do not mean to argue against the University’s decision to bring the library to Hyde Park. I take issue with the University’s inconsistent interpretation of the Kalven Report. Depending on the whims of the administration, the University veers wildly between strict adherence and active disregard.

When faced with demands that may inconvenience its financial operations, such as divestment from fossil fuel companies, the University has relied on the Kalven Report to justify its inaction. Presented with the opportunity to bring a prestigious presidential library to Hyde Park, however, the possibility that the University’s activities may support Obama’s politics does not appear to have posed any significant concern. If the Kalven Report is to be more than a get-out-of-jail-free card for administrators faced with difficult decisions, an update defining how and when the report guides University decision-making is long overdue.