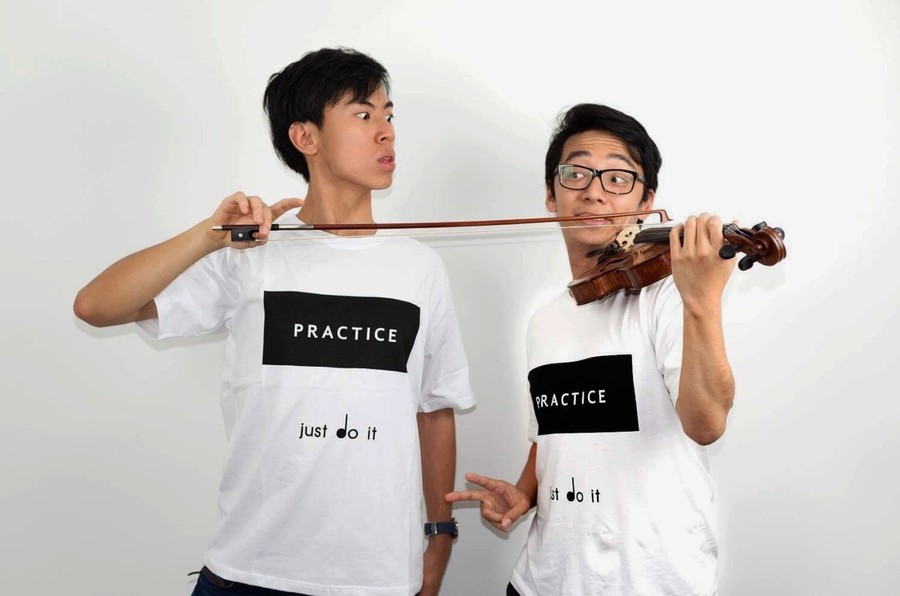 When I was in elementary school, my mother signed me up for piano lessons. I would be lying if I said I enjoyed every minute of it; sometimes, it was an absolute nightmare playing a measure over and over again to get the techniques right. Other times, I’d sit at the piano for hours on end, striking the keys until my fingers cramped, yet relishing every note. For me, musicianship is a love-hate relationship between the instrument and the musician.

Established in 2014, Australian comedy musician duo TwoSet Violin accurately—and sometimes painful—captures the life of classical violinists through YouTube videos. Formerly members of professional symphony orchestras in Australia, violinists Brett Yang and Eddy Chen founded TwoSet Violin to pursue their goals of becoming comedians while keeping music close to their work. Their YouTube channel currently has over 650,000 subscribers and over 90 million views. Their videos include “How to Fake in Orchestra,” “Every Audition Ever,” “21 Types of Orchestral Players,” “The Debussy Conspiracy,” among many others. They make playful jabs at violists, demonstrate rigorous classical knowledge, and share all-too-relatable content on the life of violin players. In 2017, they left their jobs to begin a Kickstarter campaign and become history’s first-ever crowdfunded classical concert world tour. In just five days, the duo raised $50,000 to pursue their world tour. They have since collaborated with esteemed musicians such as pianist Lang Lang and violinist Janine Jansen.

This tour became a reality for both TwoSet and its thousands of fans on Sunday at a sold-out evening recital in Evanston; tickets went so quickly that an additional matinee show was added. Despite the blizzard warnings that loomed over northern Illinois, fans braved the cold and lined up all the way around the block outside Nichols Concert Hall.

“I didn’t care if it snowed, sleeted, or flooded. Rain or shine, I would have swum here if I had to!” declared an attendee from the University of Chicago. “I’ve watched TwoSet ever since I was in high school, and as a pianist, I relate to so many things they had to suffer through as orchestral musicians. I love them.”

Piano accompanist Jenny Li opened the recital with her interpretation of a Debussy piece, gracefully performing the glissandos juxtaposed with the staccatos. The acoustics of the hall were to her disadvantage, resulting in her playing forte throughout a piece meant to stay mezzo piano and piano. However, her skills were strikingly apparent as she glided her fingers past the keys and did her best to soften the tone of the Steinway.

When Yang and Chen “stumbled” onto the stage after Li’s performance, the audience broke into thunderous applause as the musicians immediately drew their bows and began tuning for an excessively long time, a running gag on their YouTube channel. Chen began to hilariously express one of the most common anxieties of a beginner violinist; as the duo attempted to perform Bach’s double violin concerto, his bow began to shake violently, resulting in a shrieking noise from his violin. As he bolted off the stage in a panic, earning laughter from the audience, Yang expressed his “dream” of being a solo instrumentalist and brazenly performed his part of the violin duet. “Inspired” by Yang’s performance, Chen rushed back onto the stage and stole the spotlight, performing at *fortissimo* and sliding his partner off the stage. Yang fought back playfully, yawning at Chen’s performance and plucking his violin strings in Chen’s face. The competition escalated to a push-up contest amidst a piano solo by Li. The vibe was reminiscent of Victor Borge, a famous pianist-comedian who pokes fun at the light-hearted side of musicianship by spilling jokes and physical mishaps during his performances.

The concert proceeded with TwoSet Violin’s interpretations of the double violin concerto in different genres. Using an imaginary “automatic composition converter,” the duo transformed a traditionally-Baroque piece into a swingin’ jazz solo, a cacophony of dubstep, and an audience-trolling Romantic interpretation that was, in reality, a wistful rendition of “Careless Whisper” accompanied by some on-stage twerking. (“Wrong type of Romantic,” joked Yang.)

The crowd favorites were the “Diplomatic International Violin Competition” and the “Ling-Ling Workout” sketches. These included “Flight of the Bumblebee” played under one minute by Chen, and Yang’s trying to play Tchaikovsky with one finger and Mendelssohn with his hands in reverse-position—spectacular attempts that showed off their musicianship and creativity. This aspect of the recital was a tribute to an ongoing joke in their videos: the necessity of practicing music “40 hours every day” to surpass “five-year-old violin prodigies.”

The duo concluded with “Jingle Bells” remixed in the style of Paganini, complete with separate movements and an energetic combination of 16th notes and trills that poked fun at the simplicity of the original piece. They earned a well-deserved standing ovation, concluding a classical concert unlike any other. TwoSet Violin truly combined comedy with the brilliance of orchestral pieces, living up to their title of professional musicians with “down-to-earth” personalities.