Growing Up With Obama

What I took for granted growing up under the Obama Administration. 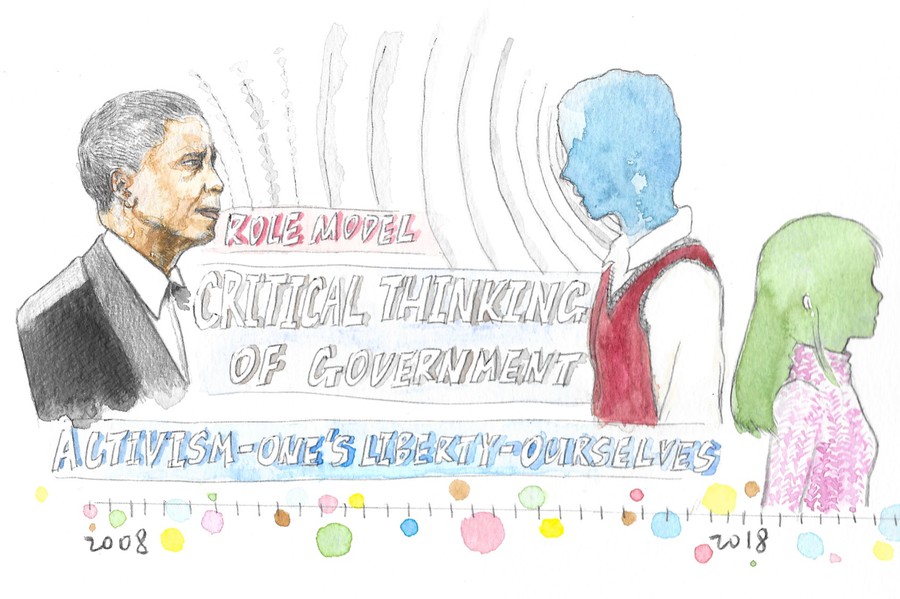 Today, Democrat Andrew Gillum will face off against Republican Ron DeSantis for the governorship in Florida. As a Floridian, I’ve been following the race closely since the primaries. The race is certainly an important one in history, with the potential for Gillum to become the first Democratic governor the state has had in 20 years. It wasn’t until recently, however, that I realized the race’s even bigger significance: Gillum may become the first Black governor of Florida, almost one exact decade after Obama was first elected president back in 2008.

This realization was jarring for me. It forced me to recognize just how enormous a role Obama has played in my life and just how incomplete a description of my life is without a discussion of the role he played in it. The tone set by the Obama administration was one of good temperament and stability, which afforded me many niceties that children born after the Obama era, like my seven-year-old nephew, won’t remember. Today, I want to take some time to reflect on the qualities I valued most in the Obama administration.

It might seem dramatic to claim that Obama had such a significant influence on my life. But the comportment of the person occupying the Oval Office can influence national discourse even at the most granular levels. I remember having disagreements over the ’08 election with some of my conservative peers at lunchtime, then playing on their kickball team two hours later. For so long, I took for granted this ability to compartmentalize politics as separate from the rest of my day-to-day life. Today, the political climate has become so volatile that differences in opinion can place stress on bonds years in the making. I’m sure I’m not the only one with a cousin or a classmate with whom I’ve lost contact since the 2016 election.

Secondly, under the Obama administration, the government was, more or less, trustworthy. From the Iran Deal to Net Neutrality, regardless of whether or not you agreed with the stance taken by the Obama administration, there was an understanding that a genuine effort was being made to do what was best for the public interest. The idea that the president was insincere in their actions was fringe, and the notion that the president of the United States might be deferential to a foreign head of state would’ve been inconceivable. It used to be the case that things said during White House press conferences or on government web pages could be trusted. I doubt that, at 13 years old, I would have had the critical thinking skills necessary to distinguish between facts and fake news, a skill which, given the misinformation so pervasive in politics right now, is critical in our country. I took for granted that the EPA’s website would contain accurate information about climate change, that government agencies were not being censored. Kids growing up in 2018 won’t have the same luxury and, sadly, will have to become cynical much earlier than I did.

Politics has always been personal, especially for people from marginalized or disadvantaged communities, for whom policy can often be a matter of life and death. From the 1960s civil rights movement to the recent Kavanaugh hearings, political action in this country has more often than not been driven by the desire of citizens to protect their rights and liberties. The Obama era, however, stands out as a moment of reprieve when juxtaposed with today’s America. Under Obama, activism was more an exercise of one’s liberty, as it should be, and less of a life-or-death imperative undertaken to protect one’s safety; there was a feeling that the government was—to a certain extent—benevolent or, at the very least, nonthreatening. The Obama administration passed the Fair Sentencing Act and repealed “Don’t Ask Don’t Tell,” advocating for oppressed peoples, meanwhile in 2018 the government is locking up immigrant children and attempting to define transgender people out of existence. It is scary to think that members of Generation Z will have to grow up with the constant pressure to defend their basic rights, to labor for access to health care, to fight for clean air and water. I resent the idea that minorities, ethnic and otherwise, must always be on guard, that we must advocate for our community and selves in order to prevent the robbery of even our most basic rights. But so it must be in times when people in high places choose to be antagonists rather than allies.

What I will miss most about the Obama administration, however, is having a role model. As cliché as this sounds, it meant a lot to me growing up to have living proof that I could be anything I wanted, even president of the United States, regardless of my complexion. It’s something more that Obama was as dignified a leader as he was; it was inspiring that he and Michelle could be so poised and focused in spite of all the adversity they faced. The prospect that the next generation will grow up without someone to look up to is ultimately what brought me to the polls this election season. Voting is how I show my gratitude. Voting is the clearest way we can express our malcontent with the status quo and our desire for a better future. It is essential.