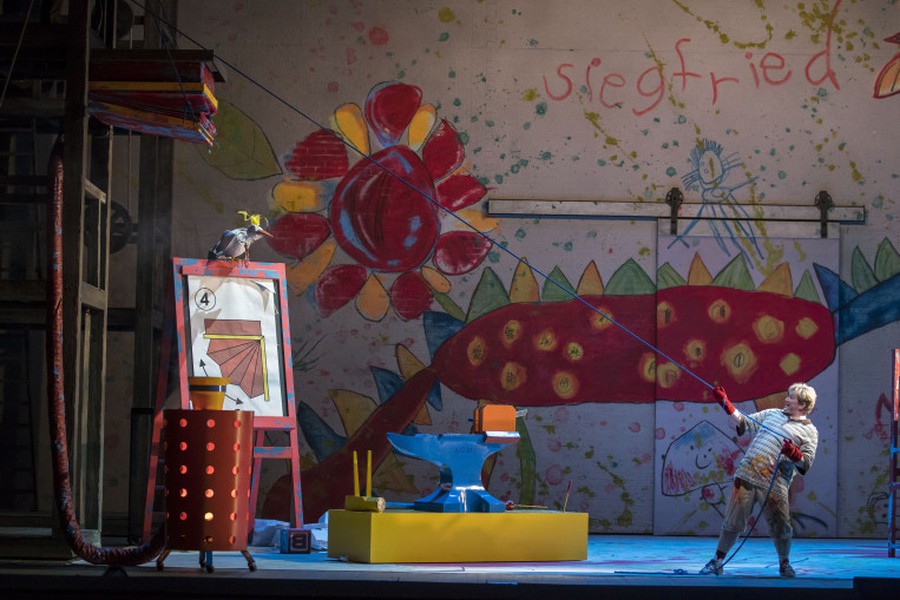 The whimsical setting of "Siegfried" recasts the political implications of the controversial opera.

These are not normal times. Why should we expect a normal Wagner production?

This certainly won’t be the review that takes a one-plank platform criticizing the Lyric Opera for producing the work of a man with profoundly shocking beliefs. Rather, a new production of Wagner’s Ring of the Nibelung cycle is an opportunity ripe for theorization. Maybe this is too obvious a point to make, given the composer’s close but ill-fated friendship with Nietzsche and his disquieting relationship with National Socialism. Siegfried, the opera presented by Lyric this weekend, embodies what cultural critic Edward Said called “performance as an extreme occasion.” The piece is “extreme” not only for the musicians, from whom Wagner demands punishing feats of athleticism, but also for the audience, reduced to crouching on staircases and consuming finger sandwiches at two-hour intervals.

With Siegfried, we’ve arrived at the third installment in the four-opera Ring. Siegfried, the titular character, and grandson of the god Wotan, kills an evil dragon, learns of a beautiful woman from some talking birds, and then fall sin love with said woman, the warrior Brünnhilde, who is, in fact, his aunt.

Though these incestuous relationships may seem like good opera fun, hiding under the surface are pernicious implications. As much as Wagner tried to imitate the tragedies of Sophocles and Aeschylus, his mythology differed from theirs in an important way: The audience at Wagner’s Bayreuth did not have the intimate familiarity with these old German myths that Athenian citizens had with Oedipus or Agamemnon. Wagner created a world that is entirely self-contained. Within that insular cell is a pure lineage for Germania: a family of deities with an exclusive bloodline that traces back to the Earth. Siegfried’s quest to fulfill his destiny by saving the world is thus a culmination of a deeply troubling vision for pure national identity. The piece’s extreme length and cyclical structure elaborate on these themes, reifying them in imitation of real time.

Wagner’s political specter haunts his operas perpetually, and any Ring cycle director must consider how to approach the narrative’s implications. At Lyric, David Pountney’s Siegfried was nothing short of inspired, both in concept and execution. At first glance, the staging appeared whimsical, even comical: Before the curtain rose, a blow-up claw of the dragon, Fafner, playfully snuck into sight, drawing laughs; the dwarf Mime’s lair was not a cave but a nursery, with brightly-colored scribbles decorating the walls; Siegfried, throughout, wore a horizontally-striped shirt and red Converse sneakers. The very idea was a welcome affront to purists and dogmatic Siegfried-as-hero adherents. Hiding beneath the Lyric production’s inventive exterior was a brilliant commentary on the opera’s heavy-handed phallocentrism. Siegfried breaks every sword his adoptive father gives him as he longs after his mother. Finally, he forges the strongest, biggest sword for himself, which he ultimately uses to fracture Wotan’s spear (the other large oblong object which was up to this point the symbol of ultimate power) and free Brünnhilde, who immediately becomes his lover.

The nursery setting serves a double purpose. First, it demonstrates Siegfried’s childishness: It is possible to stage a convincing production in which the hero’s misguided search for destiny is absurd. This coherence is especially important for the opera’s closing scene, a notoriously difficult passage to stage, in which Siegfried and Brünnhilde anguish over their romantic attachment. Pountney’s consistent allusions to childhood give the performance a sense of adolescent confusion.

Second, this concept suggests the frivolity and absurdity of Wagner’s political agenda. After all, what could be more whimsical than to write a fictional national creation myth (and one of pure lineage) in the late 19th century? Pountney latched onto Wagner’s ideology and revealed all of its romantic extravagance.

Pountney’s vision was carried out by a formidable team. Marie-Jeanne Lecca demonstrated the rich possibilities of costume with her dramatic, exquisitely detailed designs. Sir Andrew Davis led the orchestra with his customary energetic flair, and the players responded beautifully. Chicago is indeed lucky to have them back.

Turning to the singers, Christine Goerke made a triumphant showing as Brünnhilde, her voice full of the power and drama of that difficult role. Eric Owens presented an emotionally complex and beautifully sung Wotan with commanding stage presence. If one were to make a quarrel with any part of the opera, it would be that Burkhard Fritz was not able to summon the vocal power necessary to play a convincing title character, a fact made the clearer by juxtaposition with an otherwise successful cast.

It is clear that Pountney has achieved his goal of returning the Ring to its theatrical roots. Lyric’s Siegfried overflows with the excitement and freshness of new theater. It is relevant and stimulating, and details of the characters reveal themselves in ways experienced viewers may not have foreseen. So, to the offended purists out there, is this staging not an expression of Wagner’s aim to politicize the theatrical space through its rejection of Wagnerian norms? An audience willing to engage seriously with Wagner’s operas should welcome urgent, consequential disruption.

Perhaps the biggest operatic disappointment in Chicago this year is that after such an inspiring Siegfried, we are forced to wait a year for Gotterdämmerung. I’ll be doing so with bated breath.

The final two performances of Siegfried will be on Sunday, November 11, and Friday, November 16. $20 student tickets are available. through Lyric’s NEXT program.