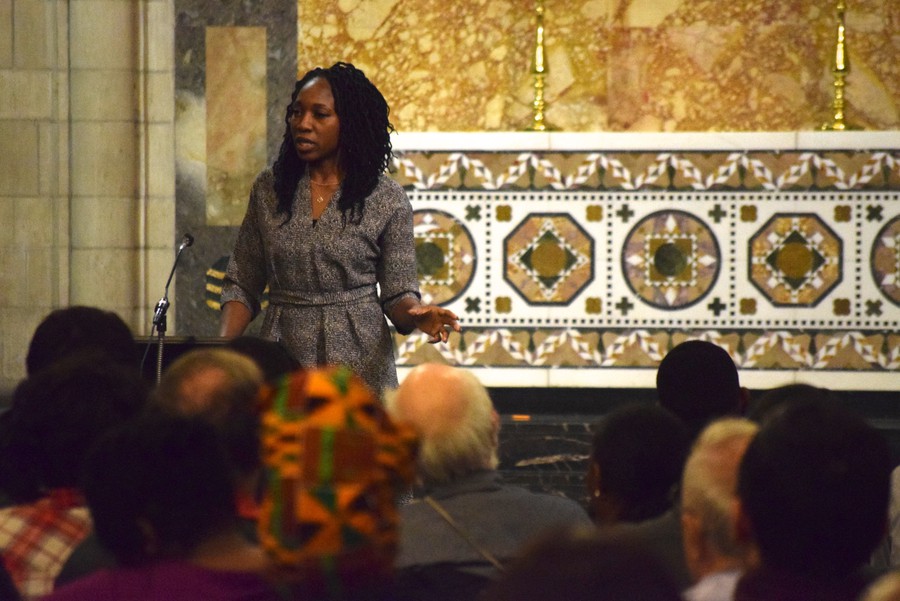 Amara Enyia expressed strong support for a CBA at the forum.

Three of Chicago’s 21 mayoral candidates gathered at the First Unitarian Church of Chicago for a forum with Hyde Park community members on Tuesday.

The forum—the first of three to be hosted by Indivisible Chicago–South Side before the February 26 election—featured Lori Lightfoot (J.D. ’89), Amara Enyia, and representative for Illinois’ 8th District La Shawn Ford.

Candidates went up one by one and fielded questions from attendees about their plans for Hyde Park as well as the city as a whole. All three candidates agreed on the need for a Community Benefits Agreement (CBA) ordinance ahead of the opening of the Obama Presidential Center (OPC). Candidates’ views differed, meanwhile, on whether to abolish Chicago’s Immigration and Customs Enforcement (ICE) agency, which has been accused of unfair detention practices in spite of Chicago’s sanctuary city status.

Enyia, the director of the Austin Chamber of Commerce, has made headlines with her recent endorsement from Chicago-native Chance the Rapper At the forum, she highlighted her hope for “a city that actually reflects our values”.

Lightfoot, a former assistant U.S. attorney, is best known as the former chair of the Chicago Police Accountability Task Force. Lightfoot acknowledged the large candidate pool, noting her early entry into the race ahead of mayor Rahm Emanuel’s decision not to run for reelection.

Ford, a Bernie Sanders advocate and delegate during the 2016 presidential primary, highlighted his experience as a CPS teacher and State Representative as important to his mayoral bid.

Each candidate spoke alone before fielding individual forum-style question and answers from attendees.

The most talked about issue of the forum was the candidate’s support of the OPC and the CBA ordinance proposed by the Obama Community Benefits Agreement Coalition as a way of preventing displacement of residents and supporting the community ahead of the center’s founding.

All candidates showed support for the OPC but maintained belief in the need for the CBA ordinance.

“No one has said that we do not want the Obama Presidential Center,” Enyia said. We have simply said that the history of development in Chicago is one of displacement, and without being proactive about making sure that the development projects actually work for the people who currently live in the city, then what we can look forward to is people getting pushed out of their homes.”

“I think that the people in the neighborhood that have organized themselves to stand up and demand that there is equity have to be commended,” Lightfoot said. “There is a lot more that needs to be done to make sure that the Jackson Park neighborhood is not adversely affected by situating the Center in that area.”

Attendees questioned Lightfoot’s record as head of the Chicago Police Board, a position to which she was appointed by Rahm Emanuel in June 2015.

One question insinuated a connection between her resignation from the board in May of this year and the hearing of Police Officer Robert Rialmo, who killed 19-year-old Quintonio LeGrier and 55-year-old Bettie Jones in December 2015.

Lightfoot responded by pointing out timing discrepancies between the two events.

Lightfoot and Ford had differing perspectives on the issue of undocumented immigrants and the presence of ICE in the city. Mayor Rahm Emanuel made Chicago a sanctuary city in 2012.

To the question of whether she supports ending the Chicago gang database and the national “Abolish ICE” movement Lightfoot simply said, “Yes and yes.”

Ford expressed support in ending the gang database in response to the same question, but laughed as he said he did not support abolishing ICE.

Candidates largely agreed on the negative impact of machine politics in Chicago, and vowed to fight cronyism in city politics. The candidates also all said they hope to address the root causes of gun violence as mayor by providing more educational and job opportunities in underserved communities.