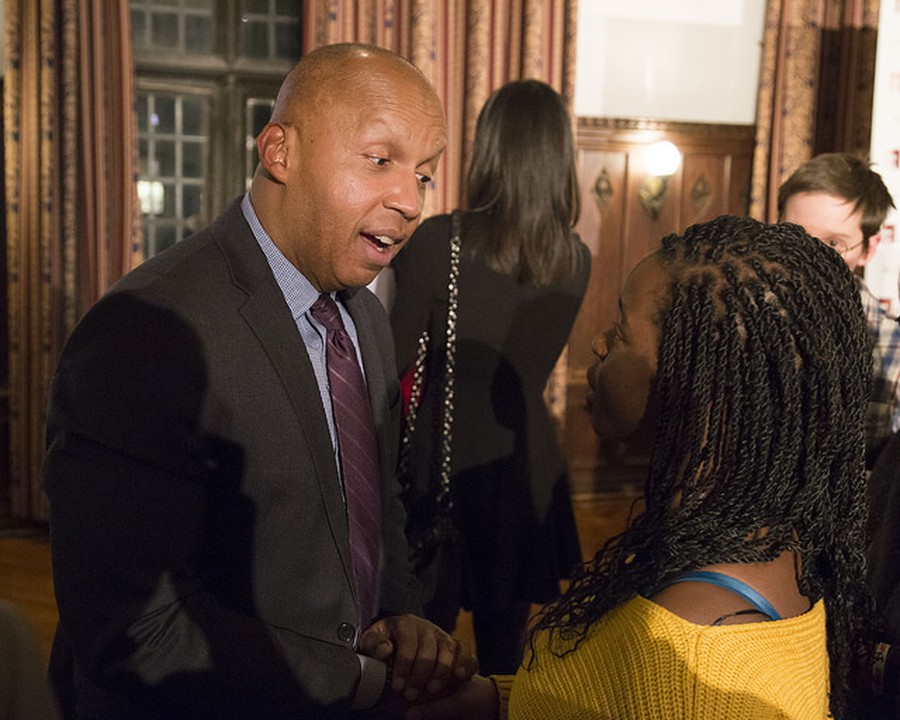 Equal Justice Initiative founder Bryan Stevenson chats with a student after his talk.

“We have just accepted this devastating phenomenon around us,” Bryan Stevenson, the director and founder of the Equal Justice Initiative, said in a talk on mass incarceration hosted by the Institute of Politics (IOP) on Monday.

A prominent civil rights lawyer, Stevenson has worked to achieve reversals and release for 125 prisoners wrongly condemned to death row. He has argued in front of the Supreme Court, winning the landmark case Miller v. Alabama in 2012, which ruled that mandatory life without parole sentences for children under 17 are unconstitutional.

In 2014 Stevenson published Just Mercy, a New York Times bestselling memoir about his experiences as a lawyer that will soon be made into a film starring Michael B. Jordan.

Stevenson described America as a deeply wounded country, where one in three black males will go to jail, 70 million Americans have criminal arrest histories, and the number of women going to jail has increased 646 percent in the last 25 years.

Stevenson likened contemporary discussions of the civil rights movement to a three-day carnival: “On day one, Rosa Parks wouldn’t get out of her seat, on day two, Dr. King led the march on Washington, and on day three, we took down all the walls of racism.”

Sharing the stories of elementary school age children who already expect to be incarcerated by 20, Stevenson said “This expectation of incarceration is condemning a generation of people. So we need to change.”

He presented what he believes to be the four most crucial steps forward.

The first, Stevenson said, is increasing our proximity to the marginalized. He added that only when we confront the realities facing the disenfranchised can we truly appreciate what needs must be met.

“We've actually gotten so far away from the most needy kids we don't even understand the intensity of the suffering and the brutality that they're experiencing,” Stevenson said.

The second thing we need to do is change narratives. Stevenson described America as a “post-genocide society,” citing the killing of millions of native people by European colonizers: “It was a genocide, but we didn't call it a genocide. We…created this narrative of racial difference to justify abuse of that population…and it was that narrative of racial difference that made us comfortable with two and half centuries of enslavement.”

He went on to discuss how the legacy of these narratives follows us to this day, relaying a story of how he encountered these biases: While defending a white man on trial, the judge assumed he was the defendant rather than the lawyer. Referring to the presumption of black inferiority, Stevenson said that “[he does] believe that narrative will undermine that judge's ability to do justice for people.”

Third, Stevenson said, we must commit to staying hopeful. Explaining that “as things get so complicated, you begin to no longer believe you can do the things that you aspire to,” Stevenson himself admitted to feeling burdened, and at times overwhelmed, by his work. Despite this, he implores us to remain hopeful because “once you become hopeless, you become the problem.”

Lastly, Stevenson cautioned that the first three steps are not enough. “We cannot change the world if we’re unwilling to do uncomfortable things,” he said. Sharing advice he received from civil rights leaders like Rosa Parks and Johnnie Carr, he added, “Change only happens when people make the choice to do difficult things.”

“We cannot stay on the University of Chicago campus if we want to change the world,” Stevenson said. He added that he felt he benefited from proximity to the disenfranchised early on in his career when he was a young lawyer. “Meeting condemned people who were literally dying for legal assistance did something radical to my consciousness about what it means to be a lawyer,” he added.

Stevenson described the American criminal justice system as preying on the broken members of society but said that despite this he believes in the power of our common humanity. He cited his own clients as having taught him that “it is actually the broken among us that can teach us the way humanity is supposed to work.”

To enact change, Stevenson said, “You just have to have this orientation of a spirit that you are willing to stand in brokenness with our brothers and sisters and do the best you can, and that's why I've learned to realize that I can't stop doing what I do.”