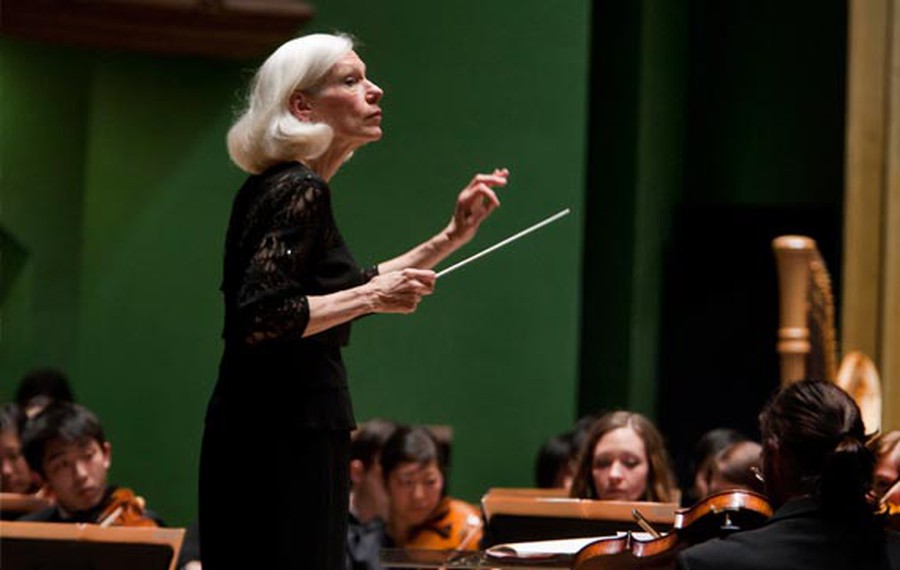 On the night of a thunderstorm, the University of Chicago Symphony Orchestra delivered an astounding performance of Russian composers Sergei Prokofiev and Alexander Glazunov, filling the performance hall with wails of despair to vivacious flamboyance. Although Glazunov’s rarely-heard-of ballet pieces and Prokofiev’s famous concert repertoire initially appear to be a strange combination, the aesthetic contrast was complemented by the brooding rain thrumming against the walls of the Reynolds Club.

The orchestra began with “Autumn” from Glazunov’s The Seasons (Op. 67). The strings set the bar high for the rest of the night with the introduction, which resonated with deep splendor. The quick running notes of the violinists and the unorthodox sharp spiccatos peppered throughout created a dramatic contrast to the introduction of the piece. This continued with a small clarinet solo, that spurred on a more legato approach, with a sweet, sultry, and romantic arabesque blending in through the harp and flute. A call-and-response ensued as the piece progressed, the long pulses of a gradual crescendo becoming more and more apparent as the oboe soloist took the melody from the clarinet, and the clarinet responded with delicate staccatos. Although the tempo was a little slower than the expected tempo, the orchestra concluded the piece with the original expository melody with greater ferocity than before.

Director Barbara Schubert then invited guest performer, violinist William Hagen, to the stage to perform a thrilling rendition of Prokofiev’s Violin Concerto No. 1 in D major (Op. 19). Beginning with an impossibly-soft tremolo, the orchestra created a background of intimacy as Hagen evoked a grieving tone reminiscent of the famed Schindler’s List theme, reflecting a depressive soliloquy. Then, in a brazen performance, Hagen shifted gears and aggressively performed in the violin’s lower octave. Although his tone was slightly sacrificed, sometimes bordering on screeching, it was for the sake of expressing pain and anguish. The theme that followed was quirky and pleasantly odd, as Hagen began plucking the string with his fingers. The 16th notes con brio were accelerated until a rallentando brought the exposition to a close with a single, dissonant note that rang throughout the otherwise-silent Mandel Hall.

Brimming with a vivace tempo, the second movement of the Prokofiev was livelier, and delivered the most awe-striking flair of the night. Brilliantly executing his ricochets and rapid jumps as his fingers glided across the strings, Hagen introduced a breathless approach to Prokofiev when he brought the tense third movement to an end with a soft, yet squeakily high pitch that demanded the audience’s silence and undivided attention. It left them with a sense of curiosity and emptiness: Was that the ending of the movement? Why does this feel incomplete? Is there more?

Before the intermission, Hagen entertained the audience with his version of Bach’s Partita in E major, performed with a playful style and dramatic dynamic contrasts throughout. Without losing his spirited energy, he built up the signature polytonality of Bach’s baroque style, and at times it felt like two violins were being played at once. His efforts were rewarded with a standing ovation from the audience.

Upon returning to the stage, the symphony orchestra’s final performance of the night was Prokofiev’s Symphony No. 6 in E-flat minor (Op. 111). Quite jarring in comparison to their other pieces was the blaring brass in the introduction, complemented by the legato of the strings. In fact, the bizarre juxtaposition created by the entire orchestra was delightfully unsettling: The imbalance was tangible as the piercing woodwinds lurked behind the richness of the strings, and the mechanical tone of the brass and the rattling snare drum aggravated the folk music–like swinging of the violas. Mimicking something like the Doppler effect, suddenly the alarm of bells shrilled over the ensemble.

The third and final movement of the night was a thrilling conclusion to the blend of harmony, the cacophony of screeches, and anguished wails of solos that defined the power of Prokofiev. Although the orchestra faltered a little in terms of the energy that they showed in the beginning of the performance, the orchestra students finished strongly with a suspenseful ending that left the audience wondering if the symphony was a joyous one or one with an ominous message that we have yet to determine.