Joffrey Explores the Boundaries of Ballet 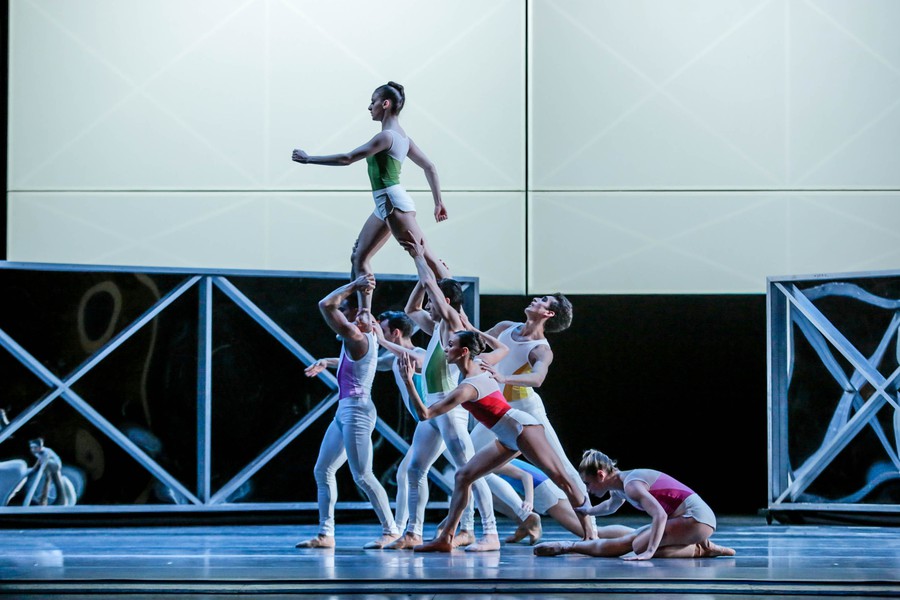 Underneath its flouncy tutus and sweeping stories of romance, ballet is an exploration of the human body. It captures the body’s ability to hold contradictions: grace and strength, softness and resistance, fluidity and tension. By stripping away the trappings of traditional ballet, Modern Masters examines the many shapes of the body and the meaning of corporality.

The Joffrey Ballet’s winter showcase features four works by contemporary icons and emerging choreographers. The 10-performance program, from February 7 to 18, includes the world premiere of Nicolas Blanc’s Beyond the Shore, the Joffrey premiere of George Balanchine’s The Four Temperaments, the Chicago premiere of Jerome Robbins’s Glass Pieces, and the return of Myles Thatcher’s Body of Your Dreams.

The evening began with experimental choreography by Balanchine, a towering figure in American ballet. The Four Temperaments scrapped centuries of ballet traditions and returned to the dance studio. Dancers wore black leotards or white T-shirts against a simple dark background. Freed from the constraints of narrative storytelling, Balanchine focused on experimenting with the limits of ballet as a geometric composition of bodies. In this unadorned cocoon of a set, the flexible yet unyielding posture of traditional ballet was abandoned for looser, more organic shapes. An elastic pas de deux bent the ballerina’s body back and forth, creating a series of distorted, complementary shapes while the score of neo-classical composer Paul Hindemith trilled in the background. The softness in the arms of a solo dancer was soon replaced by crisp tension as the rest of the dancers emerged on stage, arms raised like Thriller zombies. If the first half was a study in fluid exploration, the final scene was a vision of ballet seen through the lens of geometric angularity.

“That cellulite and flabbiness,” “So it’s not gonna,” “How can you beat it, beat it, beat it?” Repeated on staccato loops, the jarring words took on an almost musical quality. For Body of Your Dreams, nine dancers emerged from behind lit-up panels in sporty workout shorts for what would become a tongue-in-cheek take on fitness fads and the media’s distorted conceptions of self. As the dancers mimicked crunches and bounced along to bicep curls like actors in a Jane Fonda workout video, the panels pivoted to reveal mirrors while the soundtrack chirped, “That’s incredible,” with as much authenticity as a low-fat, low-sugar, low-cal dessert. A final tableau of a dancer lifted up and shown “walking” off stage as the ensemble members supported each leg spoke to the fragility and weakness that a crushing pressure on external form creates.

After an intermission came the moody, post-apocalyptic worlds of Beyond the Shore, choreographed by the Joffrey’s Principal Coach Nicolas Blanc. The soundscape for the five “worlds” had a surreal shimmer, moving from an uneasy spectral warping to booming drums undergirded by an EDM beat familiar to sci-fi dystopias. Blanc portrayed both intimacy and isolation as dancers clung to each other, then drifted across the stage. A commanding pas de deux paired the highly technical footwork and well-executed lifts of classical ballet with military accoutrement: armor-like metallic costumes, crackling radio static, and tense communications. As one ballerina hung suspended in her partner’s arms, their vulnerability and trust contrasted sharply with their rigid military salutes.

Throughout the evening, the music was often a secondary counterpart to the movements on stage. In Glass Pieces, however, the luminous compositions of Philip Glass were an equal component of the dance performance. The pulsating propulsion of Glass’s “Rubric” drove commuters in a frenetic bustle across the stage that was punctuated by pastel-clad dancers who moved with exuberance through the crowd. The more meditative underwater flow of “Façades” buoyed the tender, rippling pair of dancers as they moved through the fundamental shapes of the human body.

Strictly minimalist in its staging, the Joffrey turned attention inward in a program highlighting the outward expression of the internal, underlined by disconcerting contrast. The body became both a vessel for the soul and an intensely physical entity that occupies space and demands attention.