Men's Basketball Takes a Win and a Loss on the Road 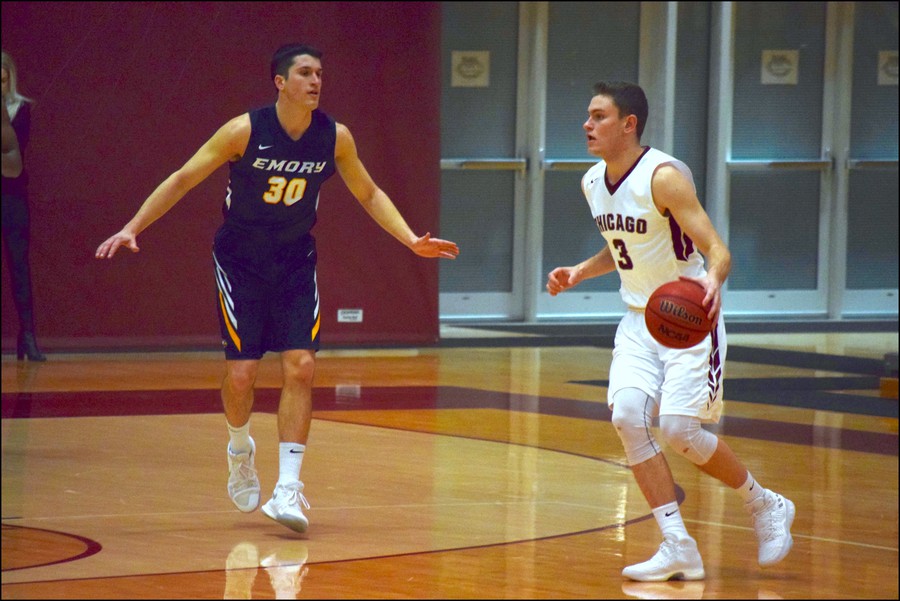 While the majority of UChicago’s student body was enamored by the snow this weekend, the UChicago men’s basketball team was locked in two tight games on the East Coast. This past weekend, the Maroons faced New York University (NYU) and Brandeis University away from home. UChicago was able to win their home matches against both teams but knew that facing them away was going to be a different battle.

The first match occurred last Friday against the Violets from NYU. The game started off in tight fashion with both teams trading leads early in the first half with the home team taking a slim lead of 37–33 into halftime. This is when the Maroons cut into that small lead, cutting it to two around the 15-minute mark and then finally taking their first lead of the half 51–49. Both teams would then trade leads up until the four-minute mark, when fourth-year Collin Barthel took over. Two straight three-point field goals by the big man turned a two-point deficit into a four-point lead late in the second half. After that, some clutch rebounds from Barthel and some late free throws from second-year Jordan Baum sealed the victory for the Maroons with a final score of 75–66. Barthel had himself a game, with a career-high 37 points on an extremely efficient 18 shots, while also shooting 10 of 11 from the charity stripe. Along with his clutch rebounds down the stretch, Barthel making this a career night was a vital reason why this close game was able to go into the W column.

Coming into the Brandeis game, after two straight wins and against a team that they had already beat at home, the Maroons were favored to continue their momentum and to march out of Waltham, Massachusetts, with another win. However, the Brandeis game was anything but easy for the Maroons. UChicago came out sluggish with the Judges taking a comfortable eight-point lead into the halftime break. The Maroons did little to cut into the gap for the majority of the second half with it seemingly becoming an easy win for Brandeis, but then, around the four-minute mark, UChicago made their run. Down 66–56, the Maroons would put together a 10–2 run to cut the lead all the way down to a miniscule two points with just 48 seconds left in the game. However, Brandeis was able to keep its nerve and sank two free throws to ice the game and seal the win with a final score of 70–66. As first-year forward Louis Mehaffey plainly put it, “Some things didn’t go right against Brandeis,” but the team is looking forward to “the final three games, [which] are massive for UAA placement.” The Maroons finish with three straight home games and hopefully can end the season with a successful run for their seniors.