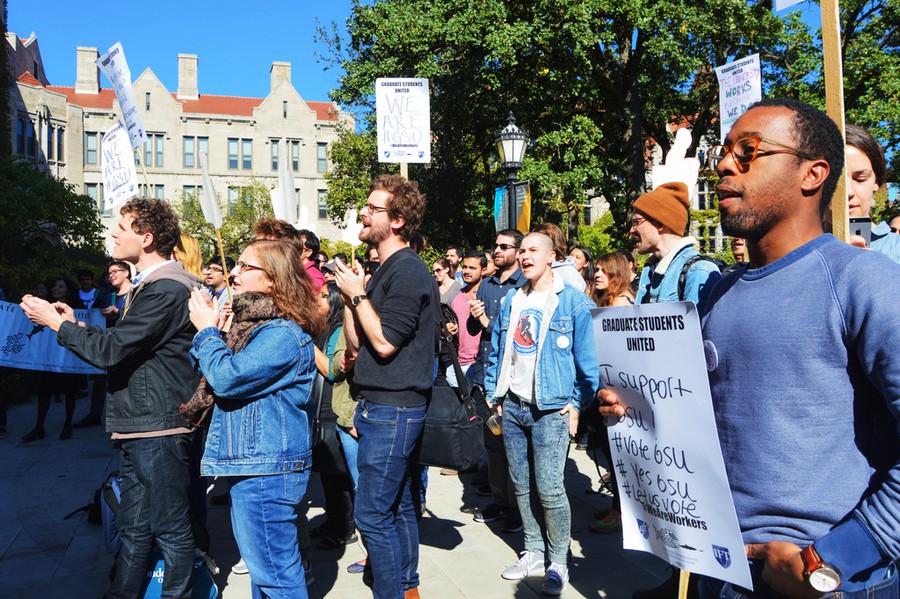 Graduate Students United (GSU) withdrew its certificate of representation from the National Labor Relations Board (NLRB) yesterday, pledging to continue seeking a union contract outside of the NLRB process.

GSU withdrew alongside graduate student unions at Yale University and Boston College in an attempt to deny the newly Republican-dominated NLRB the chance to again reverse itself on the right of graduate student workers to unionize under the National Labor Relations Act.

“Many unions across the country have reached private agreements with their employers independent from the NLRB. Through our organizing, GSU has built the power to wage a campaign to win such an agreement. Our union has the support of a supermajority of graduate employees at UChicago, whose work is necessary for the university to function,” GSU leadership wrote in a blog post published this morning.

GSU members voted to withdraw their case at a meeting yesterday, per their blog post, which cited concern that a review of their case was “imminent.” The NLRB confirmed today that the decision to withdraw rendered the outstanding issues in the case moot.

An e-mail to staff and graduate students sent this morning by provost Daniel Diermeier announced the start of a process to develop goals in improving the experiences of graduate students on campus. GSU operates as an affiliate of the American Federation of Teachers (AFT) and the American Association of University Professors (AAUP).

“While I cannot speak to the AFT’s and AAUP’s motives in withdrawing the petition, their action naturally will raise many questions about the future of our efforts to ensure an outstanding educational experience for graduate students at the University. Regardless of this decision by the AFT and AAUP, the union election outcome last October indicated that a large number of graduate students believe that the University should do more to support them,” the e-mail read.

The University of Chicago had made overturning the Columbia decision, which reopened the possibility of graduate student unionization in 2016, a central element of its challenge to GSU’s unionization push. A letter sent by the University’s law firm yesterday to the NLRB reaffirmed their attempt to overturn Columbia, and argued against an attempt to recuse one of the Republican NRLB appointees in the case.

Last week, GSU members and supporters rallied and delivered a letter calling for University recognition in front of Levi Hall while another supporter delivered the same letter to University president Robert Zimmer as he spoke at Barnard College’s inauguration in New York City.

What a Trump Administration Means for Graduate Student Unionization Efforts

The Maroon is publishing a series of articles looking at the impact of a Trump administration on the University.