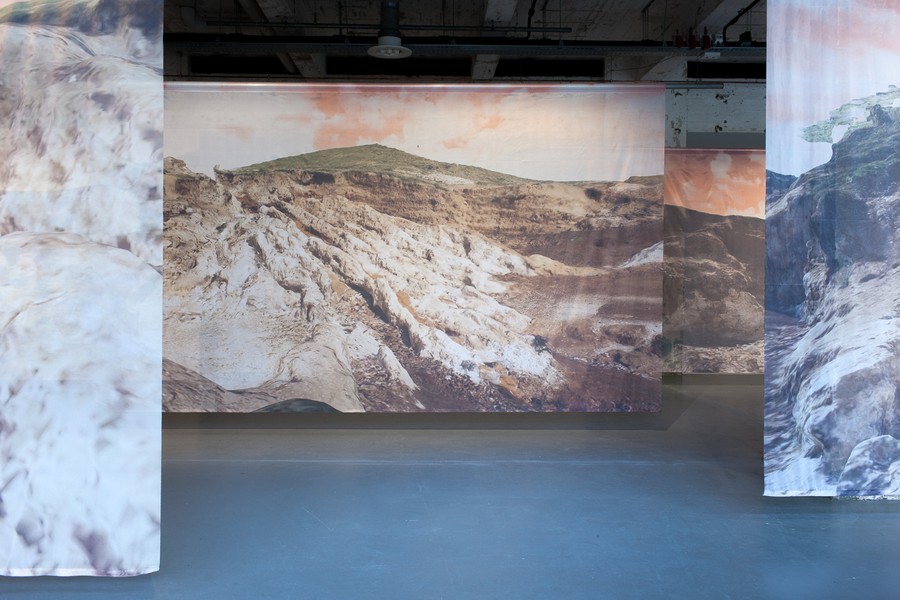 The Renaissance Society’s newest exhibit, Unthought Environments, could not have chosen a broader theme. Using the elemental world as a frame of reference, the exhibit, which opened Saturday, strives to stimulate viewers to ask, “What are our unthought environments?” The 13 artists’ works interpret the question in incredibly varied ways, their pieces ranging from the explicitly natural (such as Jochen Lempert’s large gelatin prints of wind) to the most curated human structures (such as Cécile B. Evans’s model of a tidy office, complete with a little rolling chair).

At first I was skeptical: How could any topic so broad yield a conclusion, or even a substantive discussion? Any piece of art could be abstracted from or justified by the all-encompassing theme of elements. Yet, after a slow walk through the exhibit, and especially after reading Karsten Lund’s accompanying essay of the same name, it became clear that this very breadth of interpretations was exactly the point. Yes, the elemental frame of reference might be all-encompassing, but to rethink our world in terms of phenomena that he calls “elusive, easily forgotten, or deliberately kept out of sight,” is to speak in the closest thing we have to a universal language.

While the exhibit may have centered around the most fundamental, and as Lund calls it, “archaic,” vocabulary, few of the pieces were immediately understandable. The exhibit requires a certain patience from viewers; you enter the gallery with a map in hand, complete with short blurbs on each piece, and Lund’s accompanying essay. Like an overwhelmed tourist, you weave through the disparate installations and photographs, often finding pieces hidden in corners of the room or going unnoticed on an obscured wall.

Some of the pieces bring the elemental language to the foreground, while in others, the natural is obscured. Near Here by Nina Canell and Robin Watkins, translates a 1,000,000-volt current into a visible lightning-strike pattern with photocopy toner. And Florian Germann’s emf/liquid state evokes “primordial forces” in a pool of bubbling, green gel, made from algae. Marissa Lee Benedict’s installation at first appears to be just a messy collection of black balls, bottles and fencing. With knowledge of her research in “water containment,” however, the scattered materials suddenly seem to be bobbing in a dirty waterway, and the linoleum floor begins to feel eerily fluid.

Often, such a dependence on written explanation can be a sign of an opaqueness in the artist’s vision, but in the case of Unthought Environments, many of the pieces were striking on their own. Cohen and Van Balen’s huge screens printed with distorted images of mines were sufficient in creating the desired effect of a frustratingly untouchable environment. The value of the written materials, then, was only to explain the causes of these already successful effects, in much the same way that an understanding of chemistry explains the existence of known phenomena. Why does one feel an acute discomfort while standing in the middle of Cohen and Van Balen’s screens? Perhaps because the photographs are not natural at all, but rather rendered using game engine software.

Even Lund’s essay did not so much add to the pieces as it did explain the feeling of relevance that had become clear by the time one had worked their way through the exhibit. The generality of the exhibit, each piece building on the broad concept of the elemental realm, worked to prove its own thesis. Creating effects as varied as the electric power in Near Here and the disconcerting bubbling in emf/liquid state, the pieces can’t help but create the feeling that the language of elements might in fact be the overlooked key to expressing anything and everything.

Analyzing Lorine Niedecker’s poem “Lake Superior” in her essay, Lund writes “water and earth flow through it all.” Indeed, the environments created and exposed through the Renaissance Society’s exhibit prove that the language of elements has the power to encompass any and everything.

A number of names were misspelled in the original article. We apologize for the mistakes and any confusion they may have caused.