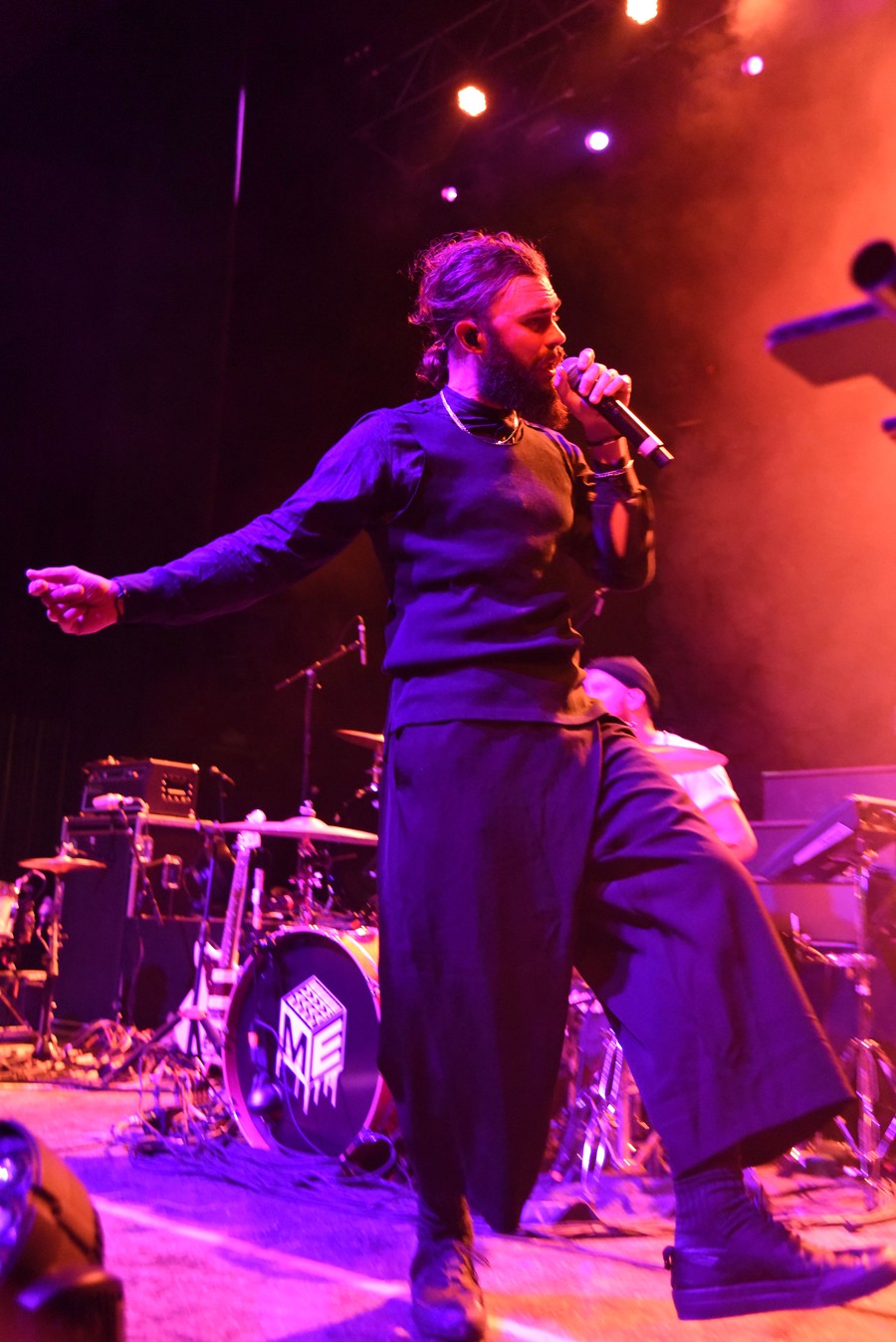 “He didn’t even play one bad song.”

“That’s because he has no bad songs,” said buzzed concert-goers, leaving the Riviera Theater on Saturday, January 27. And they were right. Børns, a singer-songwriter from Michigan, had the crowd eating from the palm of his hand. Everyone in the audience watched attentively, noticing his every move—from his sauntering across the stage to busting out one of his short, endearingly awkward dance moves. But the night’s energy did not begin with Børns; before he took the stage, the concert started off with soulful performances by Mikky Ekko and Charlotte Cardin.

Since collaborating with Rihanna on her hit song “Stay,” Nashville-based Ekko has been working on soon-to-be-released solo music and touring the country. During his performance, Ekko emphasized love and unity in both his music and casual banter between songs. He put all of his energy into the performance, belting out hits like “Light the Way” and “Stay,” while jumping around the stage to interact with his band and the audience.

The second opening artist was Charlotte Cardin, a singer-songwriter from Montreal. She played a more intimate set, with songs like “Dirty Dirty” and “Like It Doesn’t Hurt.” The piano was pushed as close to the audience as possible, and only two other musicians were on stage. Cardin had an angelic voice and asked the crowd to participate in a selfie at the end of the performance.

On Saturday, the stage was simply set, with textured leaves in the backdrop. The whole aesthetic of the show depended on colorful lights and featured the color blue to represent Børns’s new album, Blue Madonna. The sophomore album was released January 12, almost three years since his debut, Dopamine. Børns appeared onstage with a fittingly blue spotlight to sing the first song off Blue Madonna, “God Save Our Young Blood,” his collaboration with Lana Del Rey. The crowd immediately went wild. Børns, clad in a tan suit, played every song on his new album that night, singing under different colored lighting for each song. He repeatedly thanked the audience, blowing kisses that were met with screams of affection by everyone from hipsters donning matching denim jackets to bros yelling along to the lyrics. Those who were in the first few rows were lucky enough to have touched his hand.

Børns's voice sounds like honey: smooth and layered. His EP’s title, Candy, describes it best. Compared to his studio recordings, his voice sounded rawer live; he let his notes go wherever, making the performance more passionate than perfect.

Aside from playing songs from his new album, he also covered Madonna’s “Holiday,” complementing his album’s title with his usual groovy seventies style. He also played songs from his first album that were more synth-pop, getting out his guitar for “10,000 Emerald Pools” and “Electric Love,” the last and most popular song of the night. As soon as the first notes of this last song were played, the whole stage turned shades of magenta and purple. You could barely hear Børns’s falsettos above the audience shouting his lyrics back at him.

Børns once described his music video for “Electric Love” as being in the middle of the woods with space nymphs, and the crowd on Saturday night certainly fit the bill during this last song. The whole theater sang and danced together, creating an atmosphere like no other. Although the concert featured three acts, the night still felt too short. Ekko, Cardin, and Børns united the audience in a special pop euphoria; no one wanted to leave.