Men's Basketball Stuns No. 2 Wash U 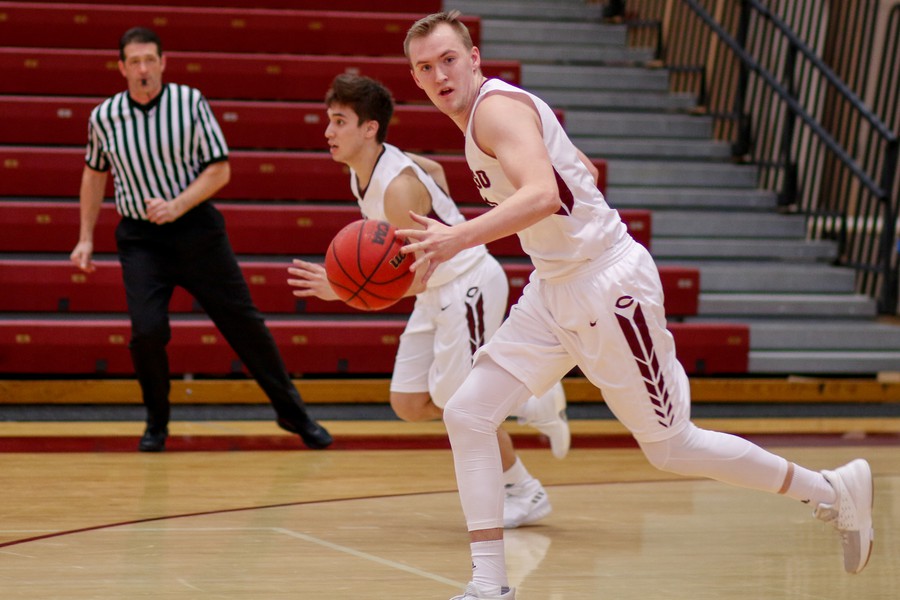 Fourth-year Collin Barthel brings the ball up along with third-year Max Jacobs.

In its up-and-down season, the UChicago men’s basketball team had one last chance to end on a high note. Heading into Saturday, the Maroons were playing some of their best basketball of the season, winning four of five matchups. However, facing Wash U was a completely different task all together. The Bears, ranked second in the nation, came into this game undefeated in the conference and on a 14-game winning streak. Wash U was on fire, with only one scare throughout its conference schedule, and a one-point victory against our very own Maroons. Chicago was eager to get revenge for a game that it deserved to win.

Within the friendly confines of the Gerald Ratner Athletics Center, the Maroons initially took an 8–4 lead and had the looks of a tight, competitive game. Suddenly, Wash U showed the quality that made it the No. 2 team in the country. UChicago’s defense could not keep up with the Bears’ efficient offense and slick passes. The Bears ended up shooting 71 percent for the first nine minutes of the game, opening up a 26–12 lead. At this point, many in the crowd must have thought that the game would be done and dusted. Instead, the Maroons established rhythm on both sides of the ball and stormed back into the game with a 20–5 run to retake the lead.

The two teams traded baskets for the rest of the half, with UChicago claiming a narrow, five-point edge at the break. After the half, the Bears were able to cut the lead down to two points with the hosts leading only 47–45. For every punch that the Bears threw, the Maroons had a counter. Following this cut into its lead, Chicago scored eight-straight points to regain control of the game. Whenever the Bears tried to make a move to tighten the game, the Maroons, leaning on the lights-out shooting of fourth-year Jake Fenlon and second-year Jordan Baum, would drain a backbreaking three to stymie the run. They shot seven of 13 from the three-point line in the second half of the game.

In the end, the Maroons were able to keep Wash U at bay for the rest of the game and ended up pulling off an upset victory 86–77. It was a remarkable way for the four fourth-years, Collin Barthel, Jake Fenlon, Ryan Shearmire, and Porter Veach, to finish off their careers. The senior class led the Maroons to 62 career wins over their four years. In particular, Jake Fenlon had one of his best-ever games in the UChicago jersey with a total of 31 points, with most coming from behind the arc. First-year Ezra Swell summed up the emotions, saying, “It was a great that we came out on top in our seniors’ last game against Wash U.” Swell also added that despite the slow start to the season it was “great that [they] brought it all together to accomplish something big.”

Overall, the Maroons ended their rollercoaster of a season well, with five wins in their last six games to finish 13–12 on the season, with an unforgettable stunner over rival Wash U.