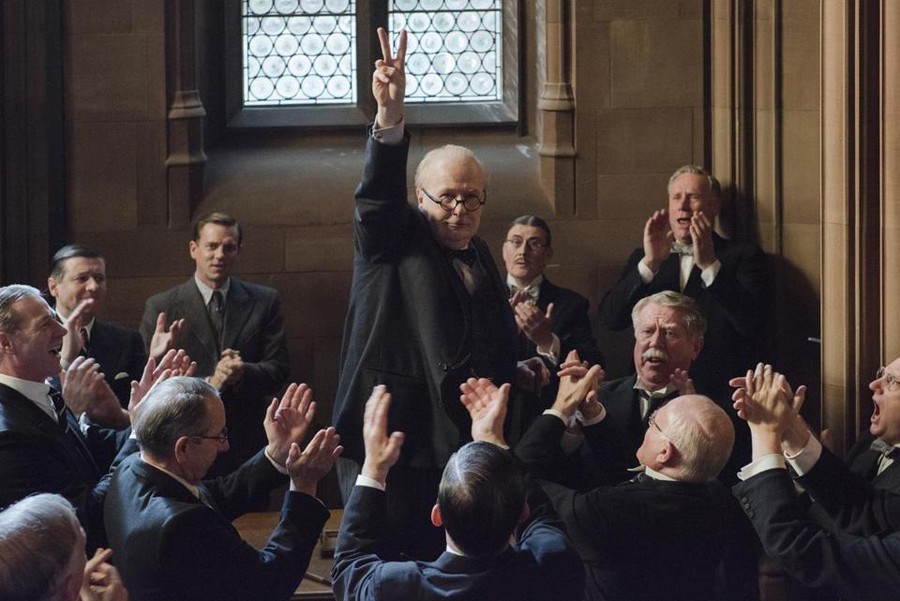 Twenty minutes or so into Darkest Hour, something strange happens. It’s not the plot, since everything there is standard biopic fare with the main character fighting to overcome those who doubt him. It’s not the cinematography, which is as impressive as is expected for an Oscar contender in 2018. No, what happens is that the lead actor exits the movie. And Winston Churchill takes his place.

Gary Oldman, who “plays” Churchill (although I suspect becomes might be the better verb here), has long been hailed as one of the most versatile actors today. He can disappear into wild and subdued supporting characters alike, playing Sirius Black in one movie and Dracula in another without making you doubt for a second that he was born to play both roles.

The lead role in Darkest Hour, then, seems custom-made for him. Oldman, no stranger to excruciatingly long make-up sessions, submitted to five hours a day in the make-up chair to transform into the iconic British prime minister. A notoriously dedicated method actor, Oldman allegedly gave himself nicotine poisoning after smoking $20,000 worth of cigars during the shooting of the film.

But even those familiar with the actor’s skills in transformative acting could not have expected the level of immersion he provides to the role. I guess he just got tired of never winning Oscars (he was nominated for his role in Tinker Tailor Soldier Spy in 2012), because in Darkest Hour he gives one of the best performances of his long career. Twenty minutes in, a switch went off in my brain; I could no longer see Gary Oldman on screen, only the larger-than-life person he was portraying.

And larger-than-life the portrayal was. It was impossible not to feel a deep sense of British pride when Churchill delivered his famous speeches to Parliament, urging the country to continue fighting against the Nazis even though all hope seemed lost. His interactions with his war council felt accurate to everything anyone has ever heard about the legendary man, effortlessly switching between cracking jokes and angry berating.

True to his versatility, Oldman also brilliantly captured the softer side of Churchill, particularly in his interactions with his wife (Kristin Scott Thomas from The English Patient, Only God Forgive). These subdued aspects of the character are crucial and heightened the impression that one is actually watching Winston Churchill rather than an accurate caricature. There is a scene that takes place on the London Underground which is a particularly good example of this; he sits among the passengers, shaking hands, kissing babies and asking ordinary Brits how they felt about the war. It captures the spirit of the character so fully that it almost makes one forget the scene almost certainly never happened in real life.

However, herein lies the very problem that prevents this movie from being truly amazing. The whole film feels like a platform on which to showcase Oldman’s acting talent, and nothing more. Sadly, Darkest Hour failed to create much meaningful interpersonal drama for most of the characters, offering up a somewhat dry plot. To see this, one need to look no further than Churchill’s secretary (Lily James). She is set up as an important part of the plot’s development early on but is quickly reduced to not much more than a passive set of eyes through which the audience can witness Churchill’s genius. Her character barely evolves throughout the film, remaining the loyal woman on the powerful man’s side, without much depth. The film seemingly tries to tell us that she was instrumental in writing some of the famous historical speeches in the film, but we don’t see enough indication of this in the plot itself or in the way she is treated by the characters around her.

Then, there’s the problem of the film’s conclusion. It resolves the political drama with what comes down to the magical power of the main character’s oration. Churchill may have possessed that magical oration, for all we know, but having all of his opponents instantly change their minds after one good speech does not make for a satisfying conclusion to the film. The script would have undoubtedly benefited from extending the runtime by some 10 minutes to show more nuance and complexity in Churchill’s conflict resolution.

Near the end of the film, one of the members of Churchill’s war council says that “he weaponized the English language.” Ultimately, I wish the screenwriters had weaponized the English language to make the story about something more than Churchill’s aptitude at writing speeches. As it stands, the movie feels like a somewhat empty shell envisioned for the sole purpose of finally earning Gary Oldman a well-deserved Oscar for Best Actor.