By Caroline Kubzansky   and Grace Hauck 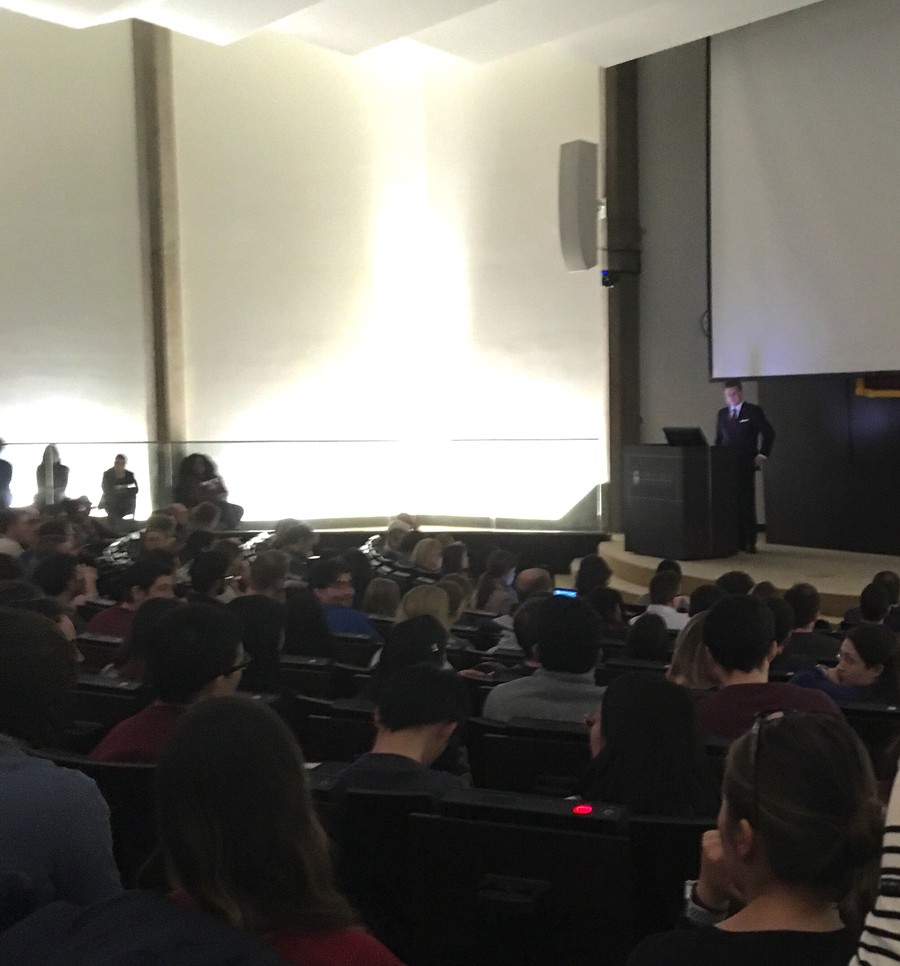 The Law School community convened Monday for an emotional community town hall following backlash to the Edmund Burke Society’s recent whip sheet for an immigration debate, which said that immigrants bring “disease into the body politic.”

The conservative parliamentary debate group has indefinitely postponed the debate, titled “Raise the Bar,” citing a “high risk of serious disturbance.” The organizer apologized Monday for the inappropriate language in the document.

More than a hundred students, faculty, and staff attended Monday’s town hall. The attendance was so high organizers had to relocate from a Law School classroom to a nearby auditorium. Many students spoke during the open discussion period, speaking about the importance of elevating marginalized voices, maintaining professionalism, and promoting a more welcoming culture at the Law School.

“None of us have to be in this room, so we are all united in that we all want to be here,” Planchard said.

Planchard noted that the Burke Society—along with the People’s Collective, another parliamentary debate society—was on probation last quarter for violating the alcohol policy for student organizations.

Planchard pledged that LSA would dedicate greater attention to regulating students’ posters (a paper version of the whip sheet was posted around the Law School): “Admittedly, we haven’t done a good job with that this year, and that’s something we’re actively considering.”

Chairman of the Edmund Burke Society Eric Wessan immediately apologized for his organization’s actions at the beginning of the open discussion.

“Before I say anything else, I want to say that I am sorry to anyone who felt attacked or belittled by this Whip Sheet. This entire thing is awful. I feel terrible about how people are feeling,” Wessan said. “I look around the community and am upset by the harm done. It is bad for the Law School community. It’s bad for dialogue and debate. It is clear this sheet has caused people to feel attacked and belittled, and I am truly sorry. One person told me that some of the arguments made were not merely parody, but mirrored ugly sentiments. Given people’s immediate and visceral reaction to those sentiments, I see that using them was a mistake.”

Wessan’s statement was met with applause. Planchard then opened the floor to students and faculty.

One law student who did not state her name articulated the pain she felt in response to the Society’s whip sheet. She explained that she no longer attends any social events hosted at the Law School because during her first year she felt personally targeted by a Burke Society debate entitled: “Close the Door to Damascus: No more Refugees.”

She encouraged attendees to expand the scope of the town hall discussion, emphasizing that student uproar in response to the whip sheet was about much more than a single controversial advertisement.

“This is about the fact that dozens of people attend [Burke Society] meetings, and that these authors have been writing these whip sheets for 29 years,” she said. “I feel [that] this institution has failed me, and I don’t want it to fail others.”

This student, among others, thanked Wessan for his public apology.

“I thank him for being the only person of the Burke Society to apologize. I think that was a good first step,” she said.

One of the event’s final speakers briefly cried onstage discussing the prejudice she has long experienced. She ultimately offered Wessan her forgiveness.

Not all members of the Burke Society apologized.

One member, who did not introduce himself by name, told the story of immigrating from Ukraine to Kentucky with his parents and grandparents in 1996. He said that he was shocked by the response to the whip sheet, which he considered disproportionate to the intended satire.

“This was not the hate and discrimination I experienced as an immigrant,” he said. “People who read the whip sheet either know—or should know or get informed after reading—that it is hyperbolic...If you were offended by the Burke whip sheet, I’m sorry, and I understand. But to then twist the narrative and attack Burke for being a group that marginalizes people…it’s just not true.”

One Chinese student said that he could not believe his peers would write such a hurtful, racially charged advertisement.

“I wonder who really wrote those things. I look at those names, and I do know some of them. I talk to them in law school. They say nice things. Did they make a mistake? Is this true? I don’t think some of them are capable of saying that. When I listened to his opening remarks, I generally believe Eric meant it: it was a mistake. I forgive you. And I hope this will never happen again at our law school.”

Other students emphasized the unwelcoming culture of the Law School overall, referencing incidents of harassment, cyberbullying, and in-groupism. One student even noted that the town hall stage itself featured mostly white male speakers.

Law professor Todd Henderson—the only professor to speak at the event, and who spoke only after all students had finished speaking—offered a tempered response. He began by affirming his liberal leanings.

“First of all, I voted for Hillary Rodham Clinton. I was a liberal before any of you were alive,” he said.

He then stressed his objection to political showmanship on both sides of the aisle, reminding students that possessing conservative views can also be isolating.

“I also object to the birthday cake for Roe v. Wade in the Green Lounge. That’s not professional,” he said. “People who are conservative at this university feel marginalized just like you do.”

In this case, Henderson felt that student reactions to the satirically-intended whip sheet were humorless.

“[The whip sheet was] merely mimicking the orangutan that is our president,” he said, causing the auditorium to erupt in laughter.

Some students, however, found this “mere mimicking” highly problematic.

“This is not a fun little intellectual exercise for your debate society. This is a real issue with real lives at stake,” one student said.

Another student, who said she identifies as multiracial, added, “Words can be violence within themselves.”

After the meeting, Henderson tweeted that he was open to talking with anyone who wanted to discuss their experience as a law student.

If you are a member of the @UChicagoLaw community, & you feel unwelcome, unheard, alone, picked on, marginalized, disappointed, or just want someone to hear you rant, come to my office. I will listen to you, then work with you to build a school we can be proud of. I promise

“When I receive letters requesting funding, I’ll be thinking about today,” he said, adding, “If you think that people aren’t paying attention to what the administration chooses to do, you’re wrong.”

In an open letter to Law School Deans Thomas Miles and Shannon Bartlett after the town hall, Planchard derided the administration for an “abdication of leadership” on this issue.

“It should not have been LSA that played the organizing role for today’s Town Hall,” Planchard wrote. “The ‘responsibility to make the Law School a welcoming place for all members of our community’ starts with you—its full-time leadership.”

Reached by phone, Miles told The Maroon that he will speak on this issue at a forum on Thursday, and he said he was pleased with student and faculty turnout today. He said it was a productive opportunity for students to engage, “and it provided me and the administrators at the Law School an opportunity to listen.”

In a formal statement released on Monday, Miles describes this past week’s events as “concerning,” explaining that difficult academic discourse thrives best in “environments of inclusion.”

“Our commitment to free expression requires that we allow uncivil speech, but it does not require that we celebrate it,” he said.

Asked if he condemns the whip sheet, Miles referred The Maroon to his past comments.

Planchard said that LSA plans to publicly release a compilation of the questions and answers from the first part of the town hall. He reminded students that LSA operates an online forum for students to ask questions directly to LSA.

“Instead of being a porcelain receptacle for other nations’ wretched refuse, the United States should again put America first,” the whip sheet reads.