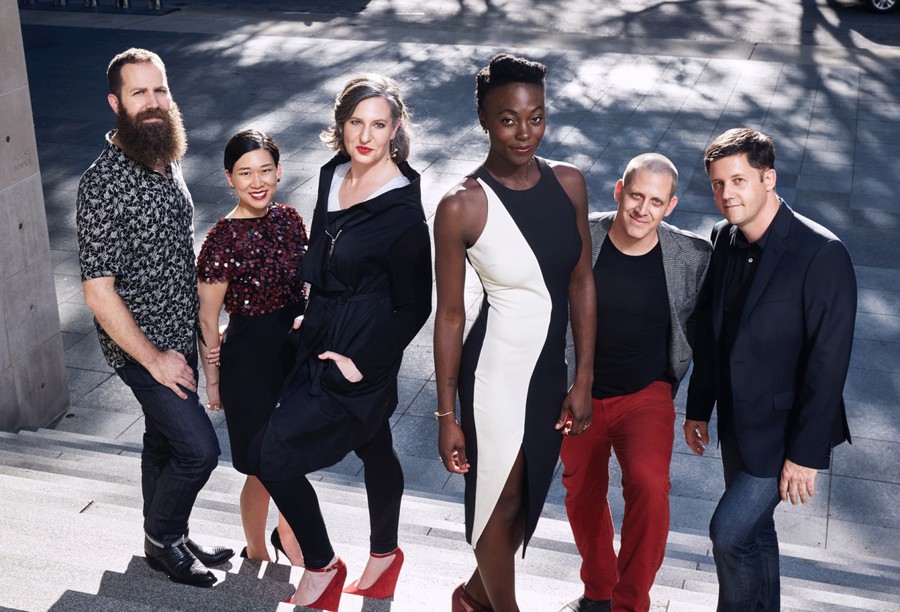 The concert opened with Amadinda’s beautiful rendition of “The Dream of the Manichaean,” composed by the Aurél Holló. The four percussionists instantly lit up the stage with their use of marimba; the music had an impressively upbeat, loose, almost tropical quality to it. The song was also musically resourceful; the musicians left not an inch of the marimba mallet (nor any of their other instruments, for that matter) untouched. The drummers transformed the head, base, and body of the mallet each into drum sticks in their own right.

Simply watching Amadinda play gave rise to its own set of visual fireworks. Trying to snap a photo of the performers was near impossible—no shutter speed could capture the dancing hands, cowbells, and flying marimba mallets, almost as if watching a fast-forwarded version of popular Food Network cooking show Chopped.

The performance paid tribute to Ligeti’s many musical innovations. It showcased micropolyphony—a musical texture pioneered by Ligeti in which differing tempos and rhythms are heard simultaneously, disguising the polyphony, in Ligeti’s words, in a “microscopic, underwater world.”

The composer’s niche role as a musician straddling the conventions of present and past was also a key theme of the evening. Indeed, Ligeti explains his musical quandary quite eloquently himself: “I am in a prison,” he writes. “One wall is the avant-garde, the other wall is the past, and I want to escape.” The audience can viscerally feel these musical eras butt heads while listening to his work.

Eighth Blackbird, named after the eighth stanza of Wallace Steven’s famous poem, “Thirteen Ways of Looking at a Blackbird,” then captured the spotlight with its impeccable performance of a selection of Ligeti’s études (Touches Bloquées, En Suspens, and Fanfares, specifically). While Amadinda’s music had been filled with imitation and recurring, short marimba motifs, Eighth Blackbird’s music represented a 180-degree shift, with each instrument doing its own thing. Dissonant harmonies and disjunct melodies coalesced in a signature, postmodernist style. Each instrument seemed to represent a competing identity, tugging the piece in a million directions. The performance was a kind of orchestrated chaos; the micropolyphony animated each instrument, as if voicing its stand in a musically rendered debate. Each measure progressed like a novel thought, refreshing, deliberate, yet wildly unpredictable.

The first half concluded with Amadinda and Eighth Blackbird coming together to perform Incandescence, by György Ligeti’s son, Lukas Ligeti, an adept composer in his own right and in attendance at the concert. The six members of Eighth Blackbird sat in the center of the stage, and the four marimba maestros encircled them. Their rendition of Incandescence had a distinctly dystopian quality to it; the instruments seemed to cry out through their disjunct melodic phrasing and organized dissonance. Yet the piece maintained a sense of coherence. It carried the audience on a rickety bus, starting and stopping abruptly, but jolting the entire ensemble in perfect unison with each turn. For a split second, one could even see the musicians frozen in time, hands raised and room silent in a stunning display of visual synchrony.

In the final piece of the night, Amadinda and Eighth Blackbird came together one last time to perform composer Steve Reich’s Sextet, a 28-minute long masterpiece featuring a series of five movements played in subtle A-B-C-B-A structure. This piece, as Reich points out, is a tribute to musical ambiguity; it was constructed to deliberately blur the lines between melody and accompaniment.

Sextet was a fitting culmination of the artists’ collaboration. The marimba motifs and occasional consonance juxtaposed with Eighth Blackbird’s dynamic dissonance created a profound sense of musical polyphony.

Coming away from the performance, one could not help but stand in awe of the performance’s stunning musical gymnastics. Together, Eighth Blackbird and Amadinda portray Ligeti not only as a master of music, but of pattern as well. Each note paves the way for his musical vanguard, neither classical nor contemporary, but somewhere in between.