Bounce Back for Mens Basketball 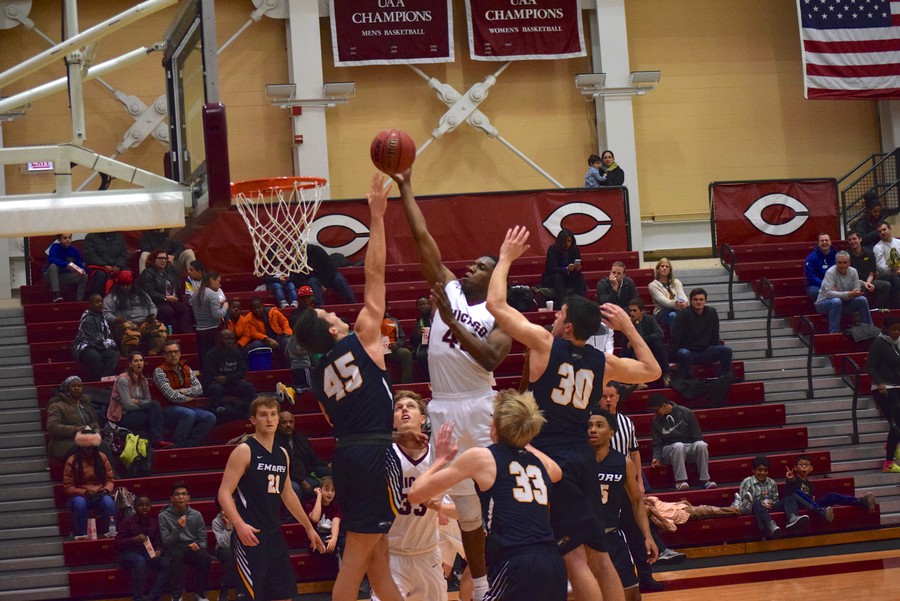 Third-year Justin Jackson rises up to make a basket.

The Maroon men’s basketball team had a packed weekend with a repeat of last week’s games. This constituted a Friday night match against No. 15 ranked Emory and a Sunday matinee against Rochester. Considering their last tightly-played game against the Emory Eagles in which they only lost by five points, the Maroons were hoping to be able to pull off the upset at Ratner.

In a closely contested first half, both teams completed runs to trade leads. The Maroons came out on top at the end of the half with a slim two-point margin. The Eagles started off the second half 10–2 to claim control of the game. UChicago put up a fight to come back within three points with five minutes remaining, but they could not keep up the momentum, and Emory took charge for the rest of the game. The Maroons ended up losing by the same margin as last week, with another tight five-point loss to the Eagles. Unfortunately, UChicago was unable to get over the hump to pull off the upset. The biggest edge for Emory in the game was that Emory’s bench outscored the Maroons’ bench by 17 points. The balanced scoring output by the Eagles was enough to put them on top as the final buzzer sounded.

Luckily, the Maroons had another game last weekend to put their tough loss behind them. The Sunday matinee against Rochester was the perfect opportunity for the team to regain their confidence, considering UChicago won the earlier matchup at Rochester by seven points.

Similarly to the Emory match, the Maroons and the YellowJackets had a tight start during the first half, with both teams tied at 16 with seven minutes left in the half. This is when UChicago took charge of the half to go into the break with a healthy 10-point lead. The momentum carried over through the start of the second half, with the Maroons scorching the nets with their hot shooting. The team claimed a 19-point lead with just over five minutes left. That is when the YellowJackets made UChicago start to sweat as they put together a 25–9 run to close the lead down to three points with only 18 seconds remaining. The Maroons’ free throw shooting came in clutch to win the game by a score of 90–83, claiming another seven-point win over Rochester and sweeping the season series for the first time since 2015.

Justin Jackson, a third-year guard, was happy with his team’s resilience in overcoming their earlier loss. “Friday was a tough loss considering we had Emory down the stretch, but we regrouped Saturday at practice and got a good team win Sunday vs. Rochester,” Jackson said. Overall, it was a competitive weekend for the team, which should give the Maroons momentum into next weekend.