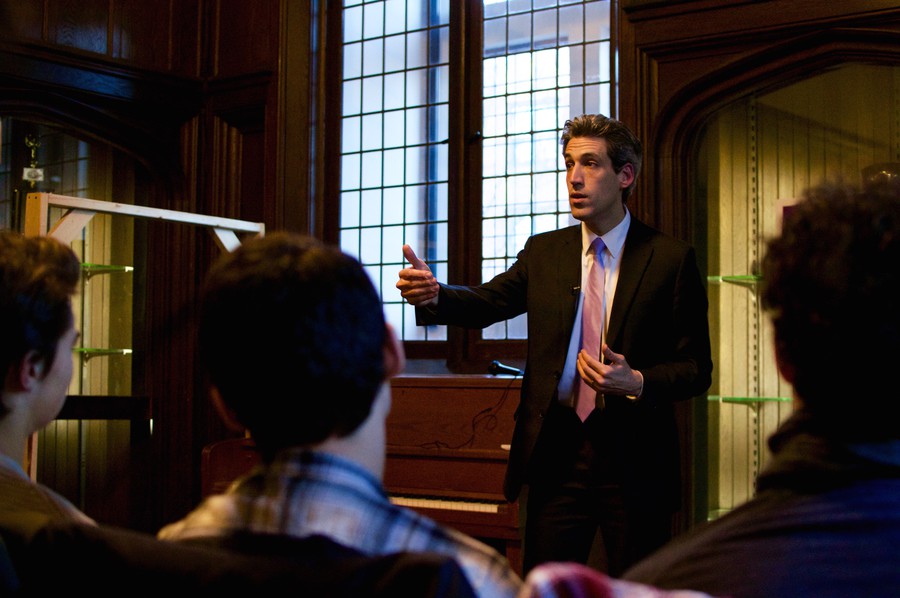 Daniel Biss, who is running for the Democratic nomination for governor of Illinois, discusses his campaign.

Daniel Biss, a Democratic candidate for governor of Illinois, made a stop at UChicago on Friday for the first of many college campaign visits.

During the event, Biss emphasized the need to challenge the status quo of governmental operations in the state of Illinois, even when the task seems daunting. “There’s a sense of inevitability and there’s a cynicism about it; there’s a view that, ‘oh my gosh, this is just how the modern economy must work,’ and what I’m here to tell you is it doesn’t have to be that way,” he said.

Biss also promoted his proposal to provide tuition-free higher education in Illinois in order to provide an equal opportunity for success to young people. “In the modern economy, it’s simply not enough in most cases to be an equal participant if you don’t have some form of post-secondary education,” he said. “We have a moral obligation to create access to free higher education for every single person.”

Biss addressed those who would say that the state does not have the budget to provide such a service.

“We’re being told this in the richest society the world has ever known. We’re also being told that here in Illinois the state is broke. Guys, Illinois is rich. The state government is broke,” he said. “The people who are benefiting realize that if we actually tax them fairly, they won’t have $3.5 billion anymore, they’ll only have $3 billion.

Biss arrived at his event after first making an appearance at the protest of Steve Bannon outside Booth that occurred earlier that afternoon.

“One of the interesting things about the protest is that we were protesting the fact that Bannon had been invited [to Booth], and the campus police were there to make sure that nobody stood on the steps, because that’s where private property begins,” he said. “So just to recapitulate: Bannon gets invited in, but the protesters are forced off of campus property. So that, I think, tells you something about pretty fascinating about their priorities.”

Biss taught at the University as an assistant math professor from 2002 to 2008 before entering politics. “The experience of teaching is standing in front of a room and talking while listening and trying to figure out how to communicate with everybody regardless of their background, and making sure that you’re not leaving certain people out.... I think that’s a really important foundation for someone to be in government,” he said. “I have the really strong view that job number one is to make sure you’re representing the entire public.”

In the Q&A portion of the event, graduate student Claudio Gonzales asked Biss about his opinion on a recent racist, transmisogynistic campaign ad released by Jeanne Ives, a Republican candidate for Illinois governor. Biss had seen the commercial only a few minutes before the event. “I was just overcome by two distinct feelings: The first is that the fact that we’re somehow living in a society in 2018 where it’s not considered unacceptable to engage in explicit racism is a pretty severe step backwards,” he said. “Because I don’t think that ad would’ve been published five years ago by someone running for governor of the Republican party in a state the size of Illinois. I feel really, really concerned about what that says about where they are.”

“The second thing I thought was, thank God we’re going to have this conversation now,” Biss continued. “Let’s understand that some very profound disease has been brought out into the open, and let’s do our best to actually cure the disease.”

Biss’s talk was preceded by short introductions by student activists, including fourth-year Anna Wood, a coordinator for University of Chicago Student Action, Chris Stamper, a graduate student in the Biological Sciences Division who is involved with the Graduate Students United, and third-year Anjali Dhillon, an organizer for Fair Budget UChicago.

State Representative Will Guzzardi also gave a short introductory speech for Biss, addressing the attack ads about Biss released by the other Democratic candidate for governor, billionaire J.B. Pritzker. “When I saw those ads, I got a big smile on my face,” Guzzardi said. “Because what it said to me is that Daniel is running a hell of a campaign and these guys are scared.”

Second-year Andy Hatem, an organizing fellow for Biss, got involved with the campaign because of the problems he noticed with the state government as a tutor for the Neighborhood Schools Program. “We had the best chance we had in years to reform school funding [this summer], and then Governor [Bruce] Rauner all of a sudden decided that he didn’t want to sign onto the deal…. He started calling it the Chicago bailout,” he said. “And I took notice when Daniel not only stood up for the funding bill, but when he was willing to go against his own party, who then again wanted to cut a deal with the governor and steal money away from our public schools.”

Hatem also supports Biss for the grassroots nature of the campaign. “Because Daniel is not backed by big money…you know he’s going to be held accountable to the people who get him elected,” Hatem said. “That’s us.”

The Democratic primary election in Illinois is March 20, 2018, and the general election will take place on November 6.