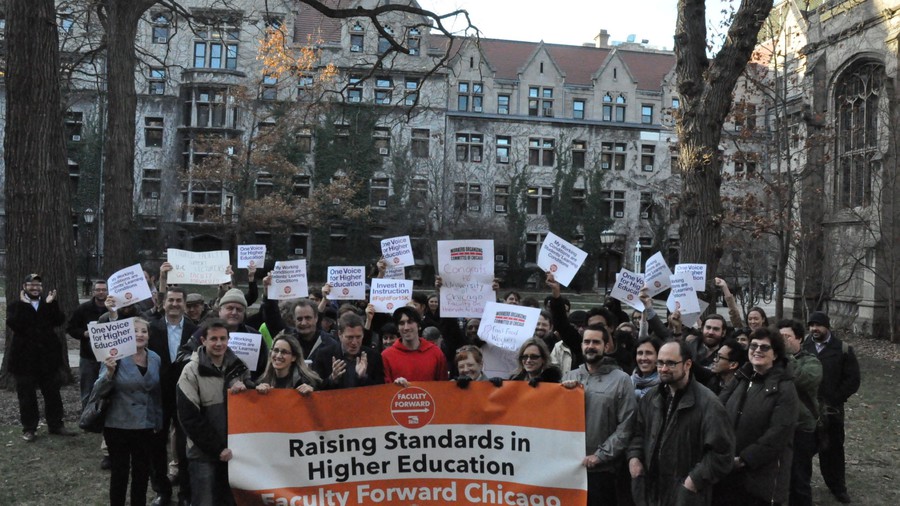 Contract negotiations between Faculty Forward, an SEIU-affiliated union representing non-tenure track instructors, and the University are scheduled to end this Thursday, but significant disagreements remain. If a deal is not reached by Thursday, the union may call for a strike.

SEIU representatives declined to comment on what specific disagreements remain. In past statements, Faculty Forward has pointed to inadequate pay increases and a lack of respect for non-tenure track instructors’ roles outside the classroom.

Faculty Forward has already passed a strike authorization vote, a key preparatory measure. The vote does not cause a strike, but it gives the bargaining team power to call for one if negotiations don’t succeed.

“Our hope is that we can reach an agreement with the UChicago administration that we can recommend for approval by our members,” bargaining team member and part-time Spanish lecturer Darcy Lear said in an e-mail to The Maroon. “At the conclusion of Thursday’s meeting, the bargaining team will decide if we’ll ask our members to ratify a contract, or go on strike in the spring.”

The union circulated a petition in support of the negotiations, and lecturers in multiple departments sent almost-identical letters requesting supporters’ signatures.

“The University of Chicago is probably paying attention to the teaching faculty that we represent more now than ever,” Larry Alcoff, an SEIU organizer negotiating for Faculty Forward, said. “To the extent that this was an invisible faculty in the past, it’s not invisible anymore.”

If a strike did occur, Faculty Forward says it would not involve stopping all classes. Instead, non-tenure track faculty would host classes off-campus, covering either their normal material or teaching about labor and strikes.

“I’d turn my dining and living room into two full-sized classrooms that we’d use to hold creative writing classes all day and night,” one of the letters requesting signatures said. “That way we get the publicity we need and our students get the same class, but in a more fun environment.”

“The University’s bargaining team, which includes faculty members, has proposed many improvements, including an increase of 43 percent in the minimum salary for full-time lecturers, a decrease in class sizes for language courses, and improved benefits for medical care and parental leave,” Manier said. “We are very optimistic that an agreement can be reached soon on any remaining subjects.”

The agreement will become final pending ratification by Faculty Forward’s members in the spring.