Endorsement: Daniel Biss is a Solid Progressive Pick for Governor 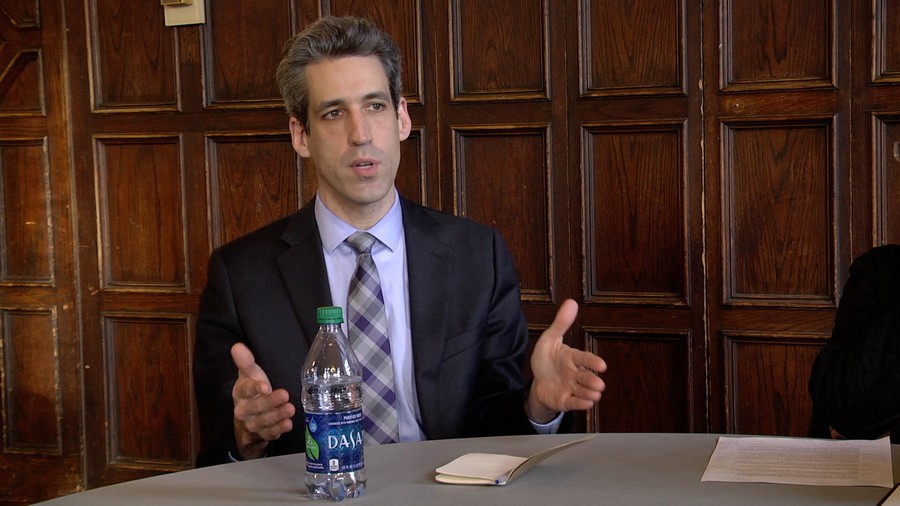 Daniel Biss sat down with the Maroon Editorial Team earlier this month.

State Senator Daniel Biss’s ambitious plans for social and economic justice are backed up by refreshingly honest discourse on problems of corruption and wealth inequality in Illinois.

Frontrunner J.B. Pritzker has made his investment ventures, such as his 1871 accelerator, a centerpiece of his campaign. We don’t dismiss out of hand the importance of attracting business; however, in practice, New World Ventures has primarily fueled growth in white-collar downtown industries. We see reason to doubt that the rising tide from tech really lifts all boats.

Biss is right to equate free college with free public schools. Any plan for a modern economy—particularly for high-skilled jobs in tech—should go hand in hand with free access to higher education. Yet Pritzker and Kennedy stop short of endorsing free higher education.

Biss, a former professor, doesn’t modulate his language to recast reality in politically expedient terms; he unabashedly denounces “financialization” and “generational transfers of wealth” as the engines driving a rigged political machine.

When Biss described his tax plan for a modern economy during a recent meeting with the Editorial Board, it was not just empty politicking. Biss said his tax proposals reflect a larger resistance to “phenomena that are built by design by capital to fragment labor, and weaken and dilute worker power.” It’s heartening to hear a politician be so direct.

Biss’s radical directness further sets him apart on issues like marijuana legalization. Whereas Kennedy has been frustratingly vague here (in brief: Don’t count on legalization), and Pritzker frames it as a boon for state revenue, Biss is the only candidate to correctly identify pot as a racial justice issue.

Whether or not you agree with taxing LaSalle Street or closing the carried interest loophole, Illinois needs a governor bold enough to advance upstream reforms, not just patchy downstream fixes.

Pritzker has self-funded his primary campaign with $70 million. A Pritzker – Rauner race would threaten to become the most expensive gubernatorial race in U.S. history, and The Maroon takes seriously Daniel Biss’s critique of money in politics.

“What [Pritzker’s] actually saying is, ‘vote for me because I can self-finance a campaign.’ And that should be...an unacceptable argument in a democracy, and a terrifying argument in a society that is absolutely overcome with metastasizing income and wealth inequality.”

Pritzker blames Rauner for making the race about money, telling the Sun-Times it’s his “duty” to respond by standing up for progressive causes. Not only does he miss the point by conceding the Illinois race should be a big-money runoff, he’s wrong to place his faith in funding.

Betting on the richest candidate is no surefire path to victory. Billionaire and Hewlett Packard CEO Meg Whitman’s 2010 bid for governor of California, still the title-holder for most expensive gubernatorial race, lost in the general election, despite her Silicon Valley ties and vastly outspending her opponent.

Though most scrutiny about campaign finance has been directed towards Pritzker, it is worth noting that, in addition to his formidable family ties, Chris Kennedy also comes from business, namely his 12-year-long stewardship of Merchandise Mart Properties. The 2018 gubernatorial race marks his entrance into elective office. With seven years of state legislative experience under his belt—two in the Illinois House and five in the Illinois Senate—Biss has an experiential advantage over his opponents.

While the Maroon Editorial Board is enthusiastic about Biss’s policies, there remain reasons to be critical of the young senator.

Biss has postured himself as a champion of the middle class, but we acknowledge that he is an imperfect champion. On this issue, Biss’s charisma and rhetoric can be more compelling than his actual track record. He has the lowest lifetime rating from the AFL-CIO of Illinois on labor issues of every Democrat on the State Senate, and he led the charge on a controversial 2013 pension reform bill that raised retirement ages and limited benefits. The Illinois Supreme Court overrruled the law as unconstitutional two years later. Though Biss did discuss his new ideas for streamlining the pension system, his past legislation gives us pause.

During the Maroon's sitdown with Biss, he also contrasted himself to Pritzker—whom he claimed had “never had to make a life decision based upon a complicated, stressful calculation”—by saying his “lived experiences...are what an overwhelming majority of Illinois families go through a regular basis.” The same afternoon, while being quizzed on average living costs, he underestimated the cost of a monthly CTA pass by a factor of three during WBEZ’s gubernatorial debate in the Logan Center.

The criteria we laid out above recommends neither incumbent governor Bruce Rauner or State Representative Jeannie Ives, the two candidates for the republican nomination. That said, Ives's visit to campus this month reinforced our impression of her bigotry-inflected campaign. Last month, Ives ran a controversial attack ad against Rauner, in which an actor portraying a transgender woman praised the Governor for allowing her to use the women’s restroom. At an event on campus last week, Ives defended the ad, saying, “That ad actually shows the policies that Governor Rauner put in place. We need to show it upright and upfront what happened.”

The relatively small portion of Hyde Parkers who fill out a Republican primary ballot should opt for Bruce Rauner in order to ensure a more productive general election campaign.

The Editorial Board recently published an interview, cited here, with Daniel Biss. The Board reached out to the Kennedy and Pritzker campaigns; neither camp responded to our interview request.

Morganne Ramsey recused herself from this editorial because she interned with the Biss campaign.