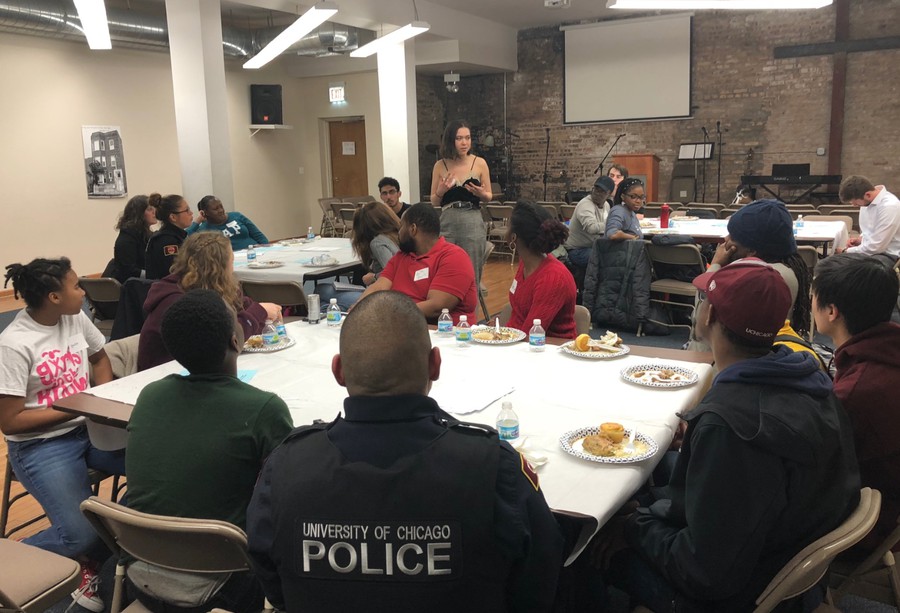 Attendees listen to a speaker at the Hope Works Dinner Dialogue event.

Students and South Side community members attended a “Dinner Dialogue” recently featuring the nonprofit Hope Works. Conversation centered around the work done by Hope Works to help South Side residents break the cycle of poverty and unemployment.

The Dinner Dialogue series, created by the University’s Community Service Center in 2017, seeks to promote the discussion of social justice issues. The meals are hosted three times a quarter at different South Side partner organizations, and are open to the public.

Rebekah King, co-founder and executive director of Hope Works, spoke about the organization.

Hope Works is a nonprofit that was established in 2014 by the leaders of Living Hope Church. It focuses on combating high unemployment rates in the South Side of Chicago.

According to Hope Works’s website, while the national unemployment rate is at 5 percent, Woodlawn’s is at 22 percent. According to King, this is primarily due to a lack of basic resources on the South Side, as opposed to a lack of jobs. Hope Works aims to provide a range of resources to address these issues, like providing affordable childcare or computer and interview training.

“We seek to provide people with soft skills,” King told us. “These are what make anyone a good candidate for any job.”

Soft skills include time management and social ability. Hope Works helps clients build these skills through activities such as mock interviews with volunteers. Skill-building sessions are individualized based on work history and personal interests.

Stewart spoke about how Hope Works impacted her life, and helped provide her with a job. As a single mother of five, she had “had nothing—no computer, no nothing.” Stewart noted that at the time it had been nearly impossible to find a job without sufficient childcare or afterschool programs, because other programs, such as the YMCA, were too expensive.

This lack of childcare presents a serious barrier in the search for a job, particularly for single mothers such as Stewart. She spoke about how her daughter, also a single mother, had been forced to quit her job at Whole Foods to take care of her son, who was born with respiratory problems. Hope Works aims to break this cycle of unemployment by partnering with Living Hope Church to provide childcare via afterschool and summer programs.

Stewart now works with mothers and children as an assistant manager at the nonprofit Hello Baby Chicago, a job that was secured for her by Hope Works through a contact at the organization. She loves meeting the families, and her dream job is to open a single mother center.

As a UCPD officer, Ramirez said she attended the dinner mainly to combat the public fear of police officers. She hopes to increase communal understanding through sharing perspectives. Being both a graduate student and police officer allows her to empathize more easily with the students she interacts with on the job, and has shown her the importance of considering different perspectives. In this way, she hopes to establish stronger ties between police and South Side residents.

Stefanescu and Chakravarty both said they came to find out more about the surrounding community, and learn about community service opportunities. Chakravarty stressed the importance of “stepping outside of the University, which can often feel insular.”

Hope Works has expanded over the past two years from scheduling appointments with two people a week, helping them find jobs through a process tailored to individual need, to an average of 25 people a week.  According to its website, the organization aims to achieve a holistic community transformation by providing resources to break the barriers to employment on the South Side, including childcare and job-seeker skill workshops.