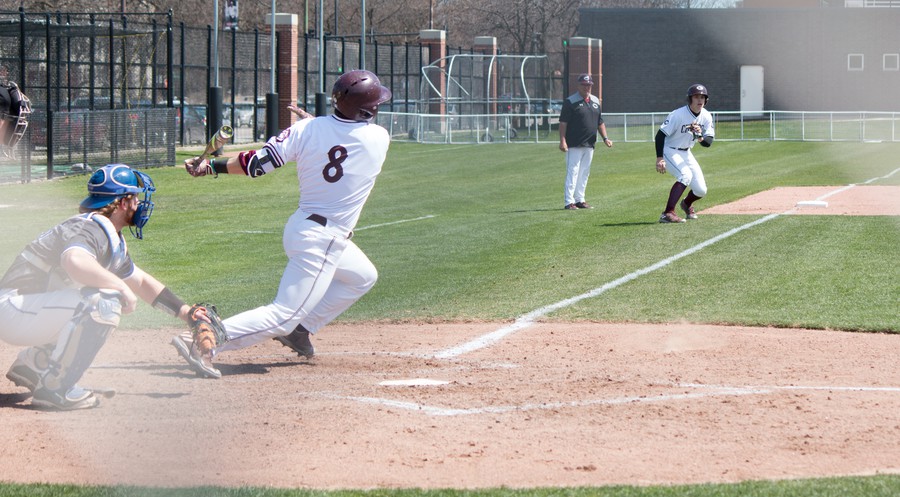 Second-year Payton Jancsy follows through on a big swing.

Before traveling to Texas, the Maroons travelled to Indiana to challenge UW–Platteville on Saturday, March 17, and Rose Hulman on both Saturday, March 17 and Sunday, March 18. The Maroons had an excellent weekend, reigning victorious and furthering their winning streak to five games. Fourth-year outfielder Max Larsen led the team to victory against UW–Platteville with a walk-off two-run hit to end the game. Third-year outfielder Connor Hickey, third-year catcher Ian Bohn, and first-year infielder Brian Lyle led the team’s offense in the games against Rose–Hulman to capture a pair of wins with respective scores of 14–6 and 5–2.

Although the games in Indiana were just the beginning of a long week of games, the wins helped fuel the team as they pushed forward. “It was big that we were able to win all three games in Indiana to have momentum going into the games in Texas, especially because most of the teams we played were already halfway through their seasons,” said Larsen.

Following their impressive weekend, and looking to continue their winning streak, the squad travelled to Texas. Their spring trip games began on Tuesday, March 20, against the University of Mary Hardin–Baylor in Belton, Texas. The squad captured the win with a score of 13–6, furthering their winning streak to six straight games.

The next day, on Wednesday, March 21, the Maroons took on the Southwestern University Pirates. The squad continued to prove themselves, capturing their seventh-straight win with a score of 6–4, and furthering their record to 7–3.

The Maroons finished up their trip with three games against the Bulldogs of Texas Lutheran University. The Bulldogs are nationally ranked No.12 overall, so the squad knew they were in for quite a challenge. The Maroons first took on the Bulldogs on Friday, March 23, where they suffered a 2–0 loss that snapped their winning streak. The next day, the Maroons suffered a pair of losses in a double-header with respective scores of 8–3 and 8–5. Larsen once again led the team with two RBIs and a double in the first game, and two RBIs and one run in the second.

Although the trip didn’t end the way the Maroons wanted, they are still happy with their performance. Third-year infielder Max Brzostowski commented on the weekend: “The trip was a great experience for the whole team, especially the younger players,” he said. “We played some talented teams and showed up, giving us the confidence and experience necessary to perform at a high level through the rest of the season.”

Larsen echoed his teammate’s sentiments. “We had contributions up and down the lineup, and a lot of big pitching performances from our starters and relievers all week,” he said. “Although we lost those last three games, we battle back a lot and played competitively against a top ranked team, which is big for us as we continue our season.”

Hickey is also proud of the team’s performance. “The team is happy with how we played over the break. We continued some of the momentum we had going into the trip, rattling off five straight wins after the first two wins of the season. Coming out of the trip above five hundred, and also being above five hundred for the season as whole sets us up nicely for the rest of the year,” Hickey said.

The spring trip in its entirety was a great experience for the Maroons both on and off the field. “Spring trips are a high opportunity for teams to bond and develop strong chemistry, and this trip did just that,” Brzostowski said. “Playing eight games over a seven-day span gives a lot of our players an opportunity to show what they can do and how they can impact the team on and off the field.”

“The spring trip is when you really see what kind of team you can be, and I definitely think we have the potential to be great”, said Hickey.

The Maroons’ season continues Saturday, March 31, when they take on Illinois College.