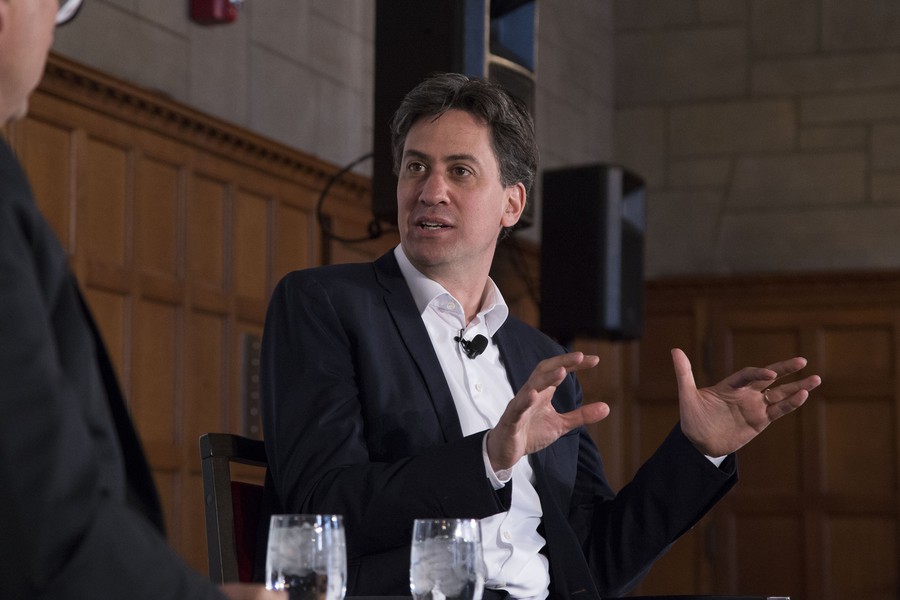 Ed Miliband, the leader of Britain’s Labour Party from 2010 to 2015, spoke to community members and students at the Quadrangle Club on Tuesday, April 10, discussing issues that included Brexit, global warming, and the future of democracy.

The event was moderated by the Institute of Politics Director David Axelrod, who worked with Miliband on the Labour Party’s campaign in 2013.

Miliband’s leadership saw the Labour Party move left, with aims to reduce inequality and to improve living standards for the working class.

However, some have criticized Miliband’s practical leadership abilities, particularly after a picture of him awkwardly eating a bacon sandwich went viral.

Miliband stepped down in 2015 after the Labour Party lost the general election to the Conservative Party, and was succeeded by Jeremy Corbyn.

During his talk with Axelrod, Miliband emphasized the need for “big answers” to current issues.

While discussing Brexit, Miliband urged the audience to look beneath the surface, arguing that the desire for change was the common motivating factor in pro-Brexit individuals.

He argued that the voters were worried about the future for their children, the banking crisis, and were on the bad end of huge inequality. He later compared Brexit to Trump, stating that “both offer the semblance of big change.”

Miliband dismissed the idea that racism is responsible for Brexit. He instead identified the root cause as “deeper economic concerns” about inequality and the economy.

“Capitalism isn’t delivering,” Miliband said. “If we’re worried about inequality now, what is it going to be like in the era of driverless cars?” He stated that inequality would only worsen with a concentration of wealth in the hands of technology giants.

Miliband’s proposed solutions included increased antimonopoly action and new redistribution plans such as universal basic income, which would replace the welfare system with a fixed regular payment to every person.

“It’s fine to be skeptical [of solutions like universal basic income],” Miliband said. “But at least it’s thinking about big scale.”

He had previously accused China of hijacking the 2009 Copenhagen climate deal, arguing that it tried to resist a deal being signed. Despite his praise of the country, he commented that, as a whole, “we haven’t brought climate justice and economic justice close enough together,” and climate change is often denied the context of other issues.

Miliband was skeptical of a second referendum to reverse the result of Brexit, although he argued that Britain has to maintain ties with the European Union.

“The Tories have this ridiculous fantasy of a free-floating Britain as a sort of Hong Kong of the North Sea, or something,” Miliband said.