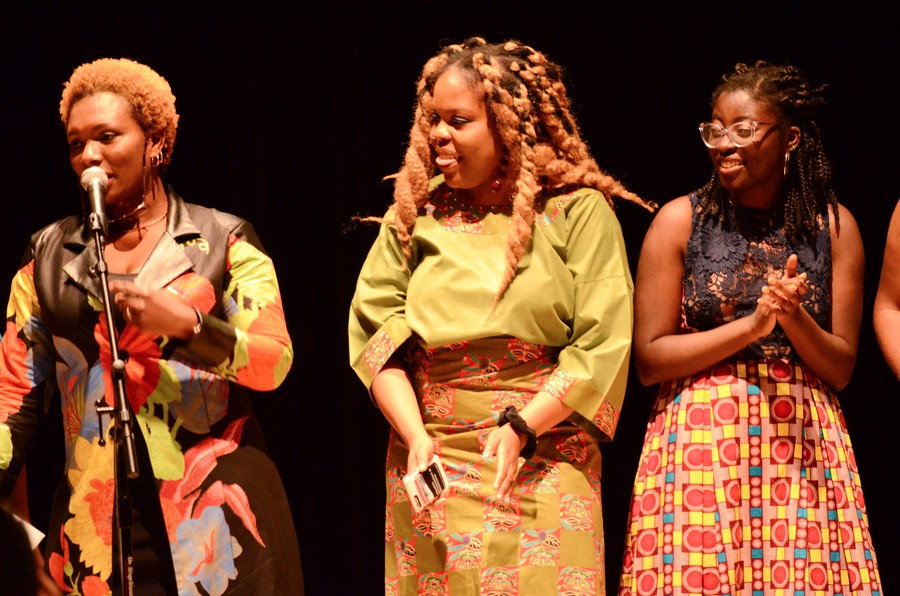 Sheila O. and the copresidents of ACSA.

“It’s important to always have a representation of your culture, to be in touch with your culture,” second-year Chinwendu Nwakudu said. “I feel like with a lot of people here it’s good to have that group, and for me that’s ACSA.”

On Friday, April 13, students gathered in the International House assembly hall for a night of fun and cultural enrichment at the African Caribbean Students Association (ACSA) Back to Basics Cultural Show. Hosted by the charismatic Sheila O. of AfroZons, the first Afrobeat radio show on a major U.S. dial, the show was part of International House’s Global Voices Program, which hosts prominent speakers and performers with the mission of fostering cross-cultural pollination in the University and surrounding community. By the time the doors opened, the line had stretched out the front door of International House.

The event offered a variety of dinner options, with platters of West African, Ethiopian, and Jamaican cuisine catered by Simi’s Restaurant, Ethiopian Diamond, and Ja’ Grill. The most popular dish on the menu was injera, an Ethiopian flat-bread made from fermented teff flour and served with meat and other toppings. Each table had bowls of chin chin, a West African snack, and a centerpiece featuring an important historical figure of African or Caribbean descent (Miriam Makeba, Chinua Achebe, and Usain Bolt, to name a few).

According to Eunice Larbi and Ayo Idowu, the presidents of ACSA, the aim of the show was to put guests in touch with their cultural roots—the basics—and for visitors to understand the history of African and Caribbean culture. They described the tendency when discussing Africa and the Caribbean today to only talk about where these societies are heading in the future. In one of the videos, a student explained that while Afrofuturism (which he referenced in conjunction with its portrayal in Black Panther) is exciting to think about, it is usually westernized and does not do enough to highlight the incredibly rich and criminally underrepresented traditional cultures of Africa and the Caribbean.

The night’s performances kicked off with a fashion show by Diella Designs, showcasing handcrafted Nigerian clothing made of Ankara fabric and handset precious stones. Student models walked down the runway to clamorous applause from their friends. The style of Diella Designs appeared more traditional than that of the next designer, Rogue Bear, whose blend of streetwear and traditional African clothing was described as “where Africa meets hip-hop.”

“A lot of the stuff you saw during this whole show I related with a lot,” said Nwakudu, who modeled for Rogue Bear. “When I initially met the designer of the clothing that I was wearing, just seeing his style and what he ended up bringing to the table…[made me] feel like [his work] represented a wide spectrum of African culture.”

The musical acts of the night featured dancers who all paid homage to traditional music, while including a more contemporary sound. The Sakata dancers started with traditional Rwandan dances styles like umushayayo and intore and finished with modern Kenyan pop music. The Femmes d’Afrique had a similar blend of old and new, and the Afrothunda Dance Troupe of Northwestern included choreography to “Man’s Not Hot” by Big Shaq, and a remix of “All of the Lights” by Kanye West.

“I like that African and Nigerian music in a lot of ways has become kind of westernized,” said Adaora Ekwonu, an ACSA board member and dancer in Femmes d’Afrique. “It’s really cool to see that blending of culture, but at the same time sometimes you just want to go back to your roots—back to what makes African music and African culture African, and what makes Nigerian culture Nigerian.”

The night also included a powerful poem by first-year Tyari Heard, original songs sung by the Evanston-based, up-and-coming artist Princess Kazayah, traditional storytelling by “Auntie J” Janice Burnett from Detroit, and videos made by students in ACSA, where students spoke about their heritage and shared important parts of their culture that are unknown to most.

Throughout the night, the sense of community in the room was tangible, and become even more so as Sheila O. led us in singing happy birthday to ACSA copresident Larbi at the end of the night. The diversity of African and Caribbean cultures represented through personal narrative and performance that night united everyone in the room by a reinvigorated respect for their cultural traditions. Just as they promised, ACSA had successfully brought the whole crowd back to their basics.