At IOP Event, Albright Warns About the Fragility of Democracy 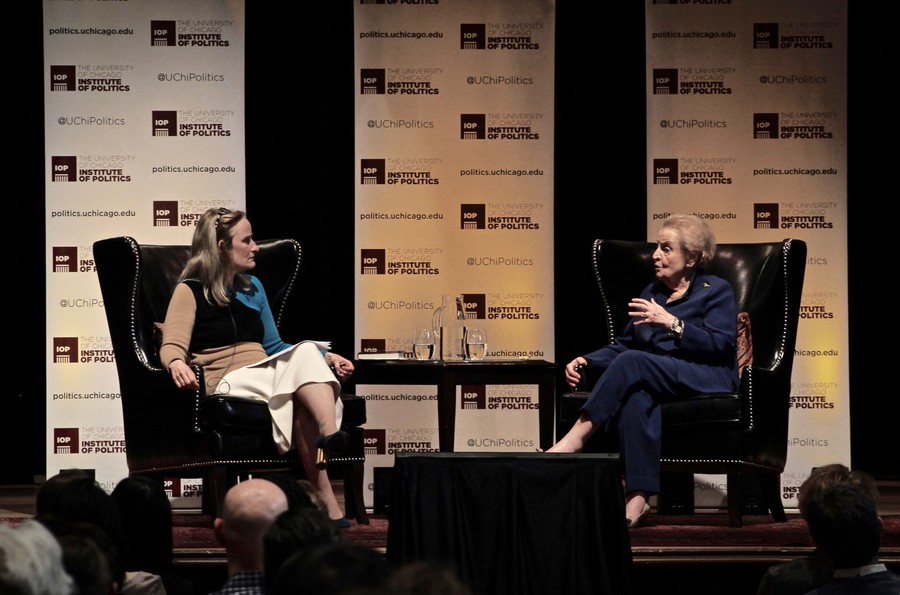 “I am 80 years old and I really do not want to die in a bad mood,” former Secretary of the State Madeleine Albright told the crowd at International House on Thursday.

At the event, sponsored by the Institute of Politics, Albright discussed her new book Fascism: A Warning. Rachel Bronson, president and CEO of the Bulletin of Atomic Scientists, interviewed Albright about the book and her experiences.

She stated that most fascist leaders came into power through existing democratic institutions and argued that institutions often don’t properly respond to people’s needs, which breaks their trust in the government.

“We all know that people…gave up some of their individual rights in order to be protected by the government, but when that gets out of kilter the social contract is broken,” Albright said.

Albright thinks this allows political figures to misuse their powers and undermine democratic institutions, including the press and the courts, in the name of providing order to their constituents.

She also warned about the dangers of not participating in the government by not voting or being aware of the political conditions.

“As a professor in the United States, my father always said that Americans take their democracy for granted and often tend to distance themselves from their political system,” Albright said.

“In many countries, people wait in lines to vote for the candidates, but a large number of Americans feel that their votes don’t count,” she said, and then joked, “When I voted for the first time, it was for John Kennedy [in Chicago] and that counted a lot.”

Albright said she wrote her book on fascism in part to help people, especially Americans, to understand the importance of taking action.

She also talked about the kind of behavior that fascist leaders show before rising to power: the willingness to scapegoat a certain group and criticize democratic institutions.

Albright particularly focused on how immigrants and foreigners are being scapegoated and how many leaders, including President Donald Trump, try to undermine the press and courts.

Although she did not call Trump a fascist outright, she expressed disapproval of his acts to undermine the press and for not advocating for the values of democracy abroad.

As an example, she mentioned Trump’s visit to Poland, where the government took steps to lower the role of the judiciary, and she criticized him for not speaking against the Polish leaders.

“Instead of signaling the U.S. as a beacon of democracy, Trump really gives some credibility to those that, in their societies, are undermining their fragile democracies,” she said.

During the event’s Q&A session, UChicago first-year Sam Owens asked Albright about why Trump’s acts would be considered fascist when previous American presidents have scapegoated ethnic minorities and been hostile to immigrants, too.

While Albright said that Owens’ point was good, she argued that Trump has demonstrated “a combination of all those actions” that she would associate with fascist movements.

She ended the event by urging people to be active in the system and do something if they feel that democracy is threatened.