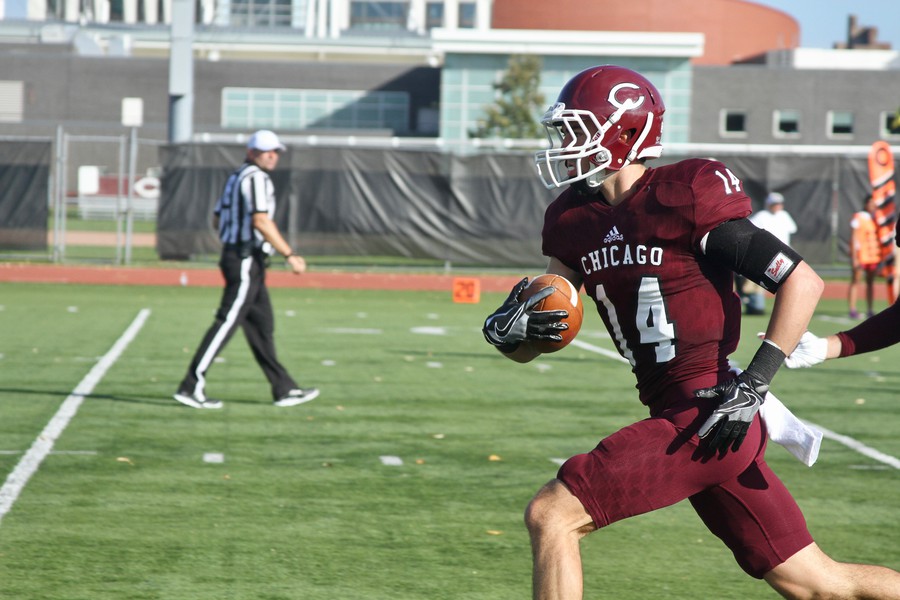 Andrew Beytagh recovers the ball for the Maroon defense.

Leadership is a trait that is thrown around to describe many people today, but what is it that truly depicts someone who has strong leadership? If you ask head coach Chris Wilkerson, his answer would be to watch fourth-year cornerback Andrew Beytagh. Even teammates are quick to offer praise on his leadership ability. First-year linebacker Graham Repp emphasizes that Andrew is “a natural leader” on and off the field. This leadership was vital to Andrew’s football career and the Maroons’ success this year.

One aspect that leaders usually have is the ability to overcome challenges in their life while also constantly improving themselves and others around them. To describe Andrew’s career, coach Wilkerson stated that Andrew’s “career was defined by perseverance.” One of Andrew’s biggest challenges to overcome was a shoulder injury during his sophomore season with the Maroons. Injuries are difficult for any athlete to deal with. This one could have derailed Andrew’s career as it took place during his second year, arguably the biggest year for improvement for collegiate athletes. However, instead of caving into a setback, Beytagh became more motivated to prove himself at this level. Incredibly, he was able to surmount this challenge and start the last 20 games of his career, eventually becoming team captain. This ability to overcome challenges throughout his career and to stay focused throughout it all emphasizes one of the leadership traits that Beytagh possesses.

Another leadership quality which Andrew showed throughout his career here was his dedication to continued improvement, according to coach Wilkerson. This is a trait that coaches absolutely love; they dream that all of their players are this devoted to improving. Coach Wilkerson was impressed by Andrew’s “attention to detail and constant film analysis” which “allowed him to be a First Team All-UAA and Honorable Mention All-SAA performer as a junior.”

In his third-year season, Beytagh led the team in interceptions with three and passes defended with 12. This was the season that Andrew showcased his “ability to cover anyone,” as coach Wilkerson put it. Even though Beytagh’s fourth-year statistics did not match his incredible third year, a decent chunk of this on-paper decline can be attributed to his improved performances. Beytagh was now a part of the scouting reports of other teams, leading teams to throw the ball less and less in his direction. Quarterbacks stopped throwing towards him in his fourth year, which is the ultimate compliment for a member of the secondary. One fond memory that coach Wilkerson will never forget is Andrew’s 99-yard interception return on a two-point conversion in his last game at Lake Forest. This moment was the cultivation of all of Andrew’s devotion to his craft as a cornerback.

Last but not least, Beytagh’s commitment to the program and his teammates is the most significant attribute of his leadership. Beytagh was honored this past fall by his teammates, being voted captain. Some players would struggle with this pressure, but Beytagh thrived with the onus of leadership that was thrusted upon him. According to Repp, “he’s the guy that always holds you to the highest standards and pushes you to your full potential.”

Beytagh’s dedication to improvement was not only focused on himself, but also the improvement of every single one of his teammates. Coach Wilkerson was effusive in his praise of Andrew’s ability as a captain: Beytagh “did an outstanding job leading and helping to build amazing team chemistry this fall.” In fact, he even came up with the season slogan for the Maroons, which was “The Tradition Continues.” As captain, Beytagh identified the aspect as a team that he thought they needed to improve upon, which was finishing games. With Beytagh’s vital leadership and mental toughness rubbing off on the rest of the team, he finished off his career with a 6–2 record over his final eight games. These leadership abilities will help Andrew in his future endeavors from UChicago, and hopefully he created relationships that will last a lifetime during his time here. As coach Wilkerson puts it best, “he will be missed, on and off the field.”

Other than football, Beytagh is also an active member of the fraternity of Phi Gamma Delta and Order of the C. Upon graduation this June, he will work for J.P. Morgan in Los Angeles.