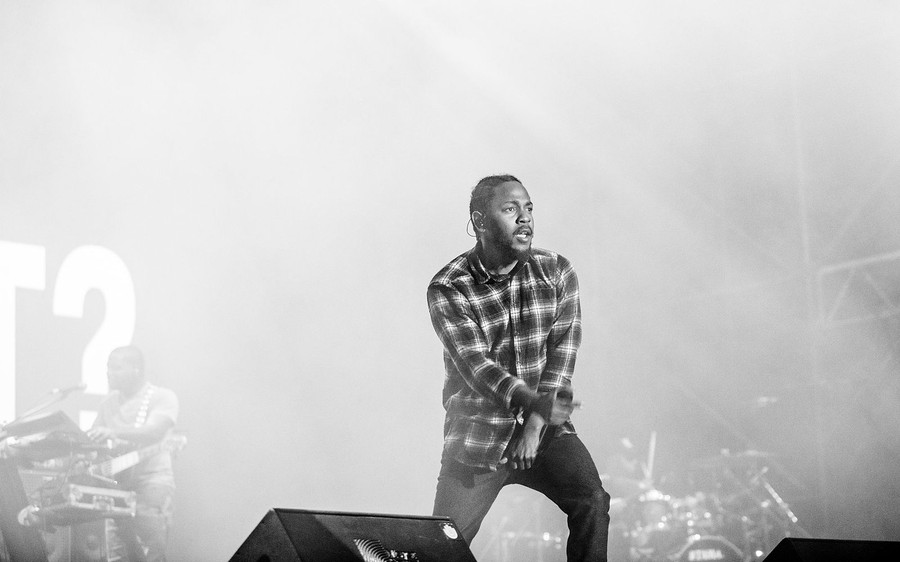 Hip-hop music has never been more canonized and revered than it is today. With the recent explosion of trap and mumble rap, as well as the abundance of fantastic new releases by veterans and newcomers alike, hip-hop has climbed its way to be on an even keel with other musical genres. And Kendrick Lamar may have just pushed the genre into the stratosphere, legitimizing it as an indisputable art form. His poetically lyrical and thematically unified album depicting African American life, DAMN., won a Pulitzer Prize for Music this month, earning its title as the first body of music not considered jazz or classical to win this prestigious prize.

Lamar uses DAMN to tell the story of where he came from and document the sociopolitical woes of modern African American society. But what sets this album apart from the rest is his illustration of the anxieties he alone continues to face after becoming successful.

In “DNA.,” Kendrick asserts his dominance and ability as an artist. Cultural pride is nothing new in Kendrick’s music, but he has never sounded more unabashedly himself. He takes pride in his blackness, as though he is taking his community to the top with him. In “DNA.,” he humorously and cunningly disses Fox News for their attempt to dismiss his music as both raucous and inartistic. Yet the song avoids sounding heavily political, mostly due to the exceptional beat crafted by veteran producer Mike WiLL Made-It.

In “HUMBLE.,” Kendrick speaks about the need to maintain a level head and a humble attitude after attaining success. He documents trying to maintain a perfect balance between the temptations of material wealth and a sense of duty to one’s self and one’s community. To express his moral struggle, Kendrick often invokes religious imagery throughout the album; the oft-quoted line “sit down, be humble” is taken from a Bible verse.

Sonically, DAMN. is remarkable. On “LUST.,” we hear a drumbeat played in reverse layered with a deep, heavy bass. It is one of the most unique beats I have ever heard on a song. The same sounds and excerpts are recycled and reused throughout the album to a dazzling, cohesive effect. The structure and effects-heavy sound of the album draws comparisons to Pink Floyd’s Dark Side of The Moon.

After all of Kendrick’s rebuttals to rap skeptics, self-reflections, and calls to political action, one arrives at the final and most important song on the album: “DUCKWORTH.” No other song in Kendrick’s catalogue so effectively and poetically documents both the struggle of growing up black and impoverished, as well as the power of fate and God. The song tells the story of Anthony, a hustler in Compton who plans to rob the KFC where Kendrick’s father works. Ducky, Kendrick’s father, foresees Anthony’s plans due to his past history of violence at the KFC, and gives him “free chicken…two extra biscuits” every time Anthony goes to the store. Ducky’s bribes prove successful when Anthony spares Ducky’s life when he actually does rob the store. Fast forward 20 years later, and Anthony becomes the head of Top Dawg Entertainment, the record label that Kendrick is signed to. Kendrick ties up the loose ends perfectly: “Twenty years later, them same strangers, / you make 'em meet again / Inside recording studios where they reapin’ their benefits / Then you start remindin’ them about that chicken incident / Whoever thought the greatest rapper / Would be from coincidence? / Because if Anthony killed Ducky, / Top Dawg could be servin’ life / While I grew up without a father and die in a gunfight.” Never has a song been so personal yet so critical in portraying the danger and volatility of being black in America.

It came as no surprise when this album won the Pulitzer Prize for Music. The Pulitzer Board calls DAMN. a “virtuosic song collection” which “offers affecting vignettes capturing the complexity of modern African-American life.” Kendrick’s album offers us a compelling candidate to rival the likes of musical greats such as The Beatles and Bob Dylan. Kendrick’s album didn’t win simply because of its musical mastery; no other contemporary artist has had such a profound impact on how we talk about race relations in the United States as Kendrick Lamar has. The acclaim merited by such a prestigious award ensures that he will continue to impact modern society for generations.