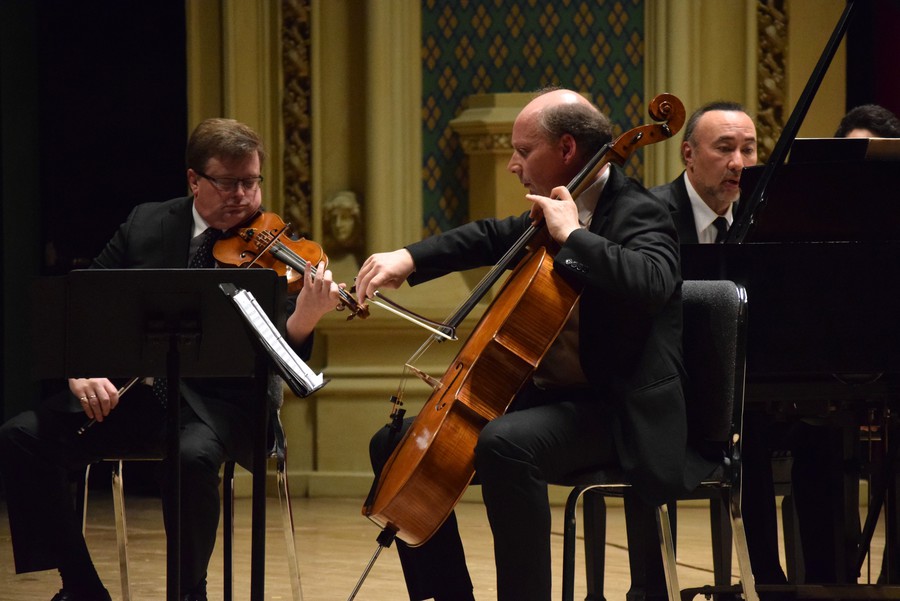 Last Friday, UChicago Presents closed out its Classic Concert Series with a performance by the Montrose Trio. Founded in 2014, its members include pianist Jon Kimura Parker, violinist Martin Beaver, and cellist Clive Greensmith. Beaver and Greensmith were members of the Tokyo String Quartet, which disbanded in 2013, and with which Parker performed regularly. Their playing reflected the nature of Montrose—their perspective was fresh and their sound full of life, but their interaction with one another showed clear familiarity and understanding.

The program opened with a lesser-known work: Joaquin Turina’s "Piano Trio No. 2 in B minor." Turina, born in 1882, was part of the 20th-century resurgence of Spanish classical, which included composers like Isaac Albéniz and Manuel de Falla. Rhythmic and harmonic figures typical of the Spanish style can be heard throughout Turina’s piano trio, as can the influence of his time spent studying in Paris. Stylistically, Turina pays homage to the classical piano trios of Mozart and Haydn, which typically had three movements (fast-slow-fast), with the form of this work. Montrose brilliantly brought out intricacies in Turina’s composition, making the unusual piece an intriguing opening to the program.

The piece also demonstrated the trio’s virtuosity. The flowing violin and cello lines immediately stood out; the tone quality blended together and the phrasing was jointly articulated, making the violin–cello moments throughout the concert particularly memorable. Parker’s deft, light playing shone in the beginning of the second movement. The finale to Turina’s trio was an interesting mix of disparate ideas; from dark and brooding to heroic, delicate, passionate, and ultimately triumphant. The different moods in the piece were well delivered and beautifully closed out its three animated movements.

The Montrose Trio followed Turina with Beethoven’s "Piano Trio in E-flat Major." This work was among the first of Beethoven’s compositions to be published, though certainly not the first piece he ever wrote. While Beethoven is readily associated with heavier works (the last several piano sonatas, for example), this early work is exuberant and positive. All three performers approached the piece with a lightness of touch that rendered the cheerful sections all the more convincing without being out of place in lyrical passages. The Scherzo and Finale brought out the best aspects of this levity; Beaver, Greensmith, and Parker were clearly enjoying the performance, which made for a great atmosphere in Mandel

Though vastly different in style, Turina and Beethoven’s trios share a certain optimism, which, though not altogether absent from Mendelssohn’s "Piano Trio No. 2 in C Minor," is far from its most prominent feature. Indeed, the post-intermission portion of the concert saw a much more passionate, even stormy, delivery. The first movement lived up to the marking: energico e con fuoco. Parker’s virtuosity was tested by the many characteristically “Mendelssohnian” passages, but his execution was superb. In the second movement, much calmer than the first, Parker traded his fiery attack for a softer approach. Beaver and Greensmith complemented the Andante espressivo’s affect with beautiful, singing lines. After the abrupt end of the energetic Scherzo, the Montrose Trio began the passionate finale.

The powerful climax of the last movement, especially when contrasted with the lighthearted works of Turina and Beethoven, displayed the versatility of this group. In one evening, they presented three vastly different styles. They captured the French and Spanish Impressionism of Turina’s 1933 trio. They managed the complex musical development and four-movement structure of the Beethoven trio without losing the intimacy of the trio form. And they encompassed the breadth of the Mendelssohn, which aspires to stretch far past the bounds of chamber music. With their exceptional technical precision and musical sensitivity, the Montrose Trio delivered a strong end to UChicago Presents’s Classic Concert Series.