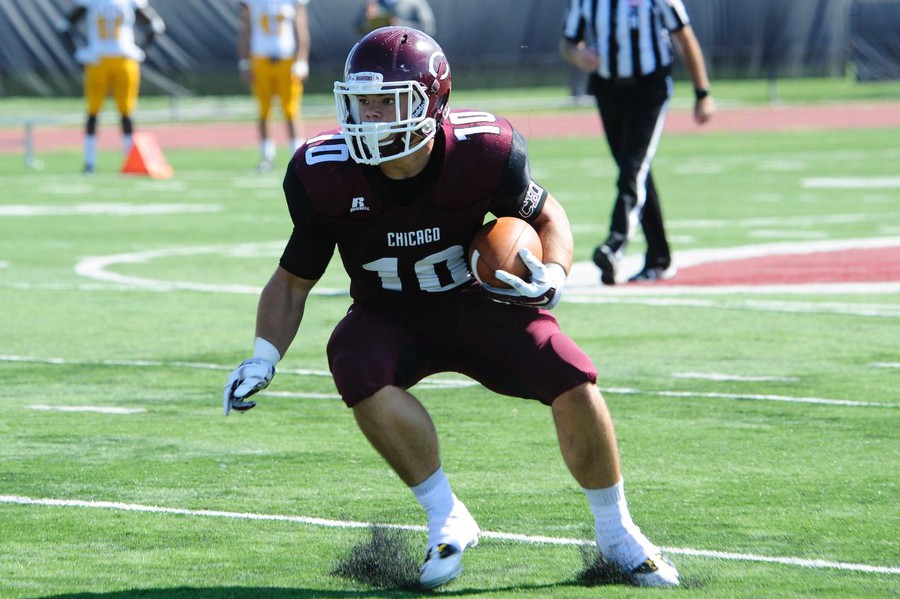 Chandler Carroll on one of his 859 career carries.

There are certain athletes who coaches say are a once-in-a-lifetime type of player to coach. These players change a game in seconds, are easily coachable, and act as model students and model humans. For the University of Chicago football team and head coach Chris Wilkerson, two-time captain, all-conference, and Academic All-American Chandler Carroll is one of those players. As Wilkerson puts it, “Chandler is the total package and truly epitomizes what UChicago student-athletes are all about.” Carroll went above and beyond the role of just being a football player.

It would be an understatement to say Carroll was a great competitor. He will be leaving this school as one of the most decorated players in the history of the program, arguably the best running back in school history. This is the man who owns the records for most points in a career, most rushing touchdowns, and most total touchdowns and rushing attempts, and who also finished second in career rushing yards and career all-purpose yards. As Wilkerson describes it, “His unique skill set allowed him to leave with eight school records while being number two in five more categories.”

Carroll was an absolute nightmare for opposing defenses due to both his rushing skill and his ability to catch passes from the backfield—the total package for an offensive player. It was not only Carroll’s athleticism that set him apart, but also his mentality and football IQ that truly made him special. First-year linebacker Graham Repp speaks high praise of the running back: “Chandler is one of the toughest guys I’ve ever met, both physically and mentally.”

This mental toughness is a trait that Wilkerson highlights as well, along with Carroll’s competitive nature. In addition to his mental toughness, Carroll’s football IQ allows him to be extremely adaptable and coachable as a player. He was able “to flourish in three different offensive systems over his four-year career,” according to Wilkerson. Weaker players would have succumbed to the lack of stability, but not Carroll. Instead, he thrived and became a more complete player due to the different styles molding him into a truly dynamic competitor.

For a player as successful as Carroll, it would be understandable to have an inflated sense of ego. But at the end of the day, Carroll is not just an athlete. He has been a successful student at UChicago and is in Repp’s opinion “the nicest and most down-to-earth person….  His success never got to his head, even though he has been extremely successful.” Carroll is as elite in the classroom as he is on the gridiron. He attacks everything in life with his tenacious mindset and energy, whether it be perfecting a play during practice or working on an economic problem set late at night in the Reg. This hardworking mentality has made him an extremely successful economics student as well as football player. Carroll fits the definition of student-athlete to a tee.

Carroll will be greatly missed on campus and on the football field. Wilkerson is optimistic about Carroll’s future but will be sad to see him move on from this chapter of his life. Wilkerson said about his MVP’s go-getting attitude: “It will serve him well as he enters the workforce. He leaves a legacy of excellence behind and will be dearly missed.”

Carroll’s legacy will be remembered, and his presence on campus will be felt even after he graduates, as he has set the standard for what it means to be a Maroon student-athlete. He finished his football career with 3,979 rushing yards, 5,186 all-purpose yards, and 46 touchdowns. Upon graduation, Carroll will be working as an investment banker for J.P. Morgan in Chicago.