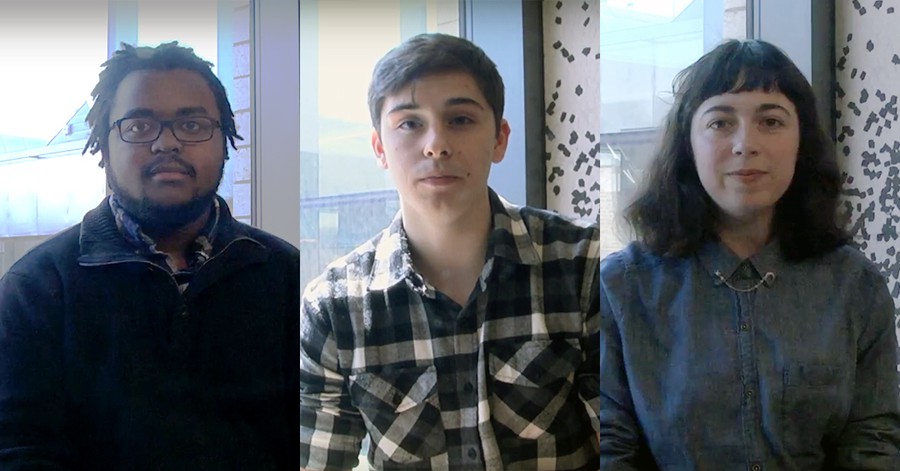 Some of the candidates for the Undergraduate Liaison to the Board of Trustees (from left to right): Jay Gibbs, Kyle Shishkin, and Brittney Dorton.

Second-year Brittney Dorton announced her candidacy for the position of Undergraduate Liaison to the Board of Trustees in a bid to “improve communication between students and the board.”

The liaison is responsible for representing the student body to the board and working to connect students with individual board members. Dorton is running on a platform of accessibility, which includes both physical and financial accessibility.

“I myself have a physical disability,” she said. “I want to make sure that meetings with the board are not only physically accessible for students with disabilities or in terms of having ASL interpreters for students with hearing impairments, but also accessible to students that might have jobs or classes that they can’t afford to miss.”

Dorton also said that she believes the liaison’s main role is connecting students to the trustees in order to discuss any grievance or initiative.

In terms of increasing administrative transparency, Dorton suggested several additions to communications between students and trustees, including making minutes of events like “Luncheon with a Trustee” and “Student Perspectives” easily accessible and expanding minute-taking for other administrative events.

She also proposes that meetings have American Sign Language interpreters available upon request, and would like to increase the frequency of meetings with varied dates and times so that students who are unable to miss class or work can still attend.

Lastly, she wants to make the trustees themselves more familiar to students.

“I’d also like to try and make the profiles of the trustees a little more public so students are aware of what a trustee is, what their powers are, how they get selected, and who our trustees are, and then I think publicizing the meetings students can have with the trustees,” Dorton said.

Second-year Jay Gibbs is running as a write-in candidate for Undergraduate Liaison to the Board of Trustees.

Gibbs said that his personal connections to different parts of campus would help him bring as many different issues to the trustees’ attention as possible.

“I am always on Facebook, I’ve been in a lot of moderating situations, I’ve been talking to people in different organizations, I’m in them myself—those kinds of conversations…[give] me a kind of neat lens into what the actual idea of campus is,” Gibbs said.

Gibbs believes that there are mechanisms in place to facilitate trustee-student interactions, but he is not sure that administrators and past liaisons have used these opportunities to their full potential.

“If we’re being realistic here, I’m almost certain…that oftentimes these meetings are kind of like having summaries, regurgitations of these ideas. The meetings that happen aren’t always meetings outside of being called a meeting,” he said.

Following the shooting of fourth-year Charles Thomas last month, Gibbs hopes to bring up the issue of mental health and the University of Chicago Police Department (UCPD)’s relationship to students with the trustees. Gibbs attributes the cause of the shooting in part to a lack of transparency on the part of UCPD and the University.

“‘Transparency’ is a kind of buzzword…but what it really is is making things that should be clear a bit more clear. I think that in this scenario…that’s making sure students are broadly aware of what mental health access exists, what it consists of, what kinds of services they can pursue for themselves, and if those services fail, what are the ramifications,” he said.

Gibbs also suggested an examination of the recent shooting to see if it violated any UCPD policy, and if it did not, a follow-up reevaluation of the policies themselves.

“If this bad event was normatively bad, [but] did not violate some set of rules, some kind of policy, then what’s wrong with those policies?” he asked.

Gibbs also said that other police forces are beginning to develop special mental health–episode response units and suggested that UCPD could develop a division like this for the future.

“Maybe we can make some kind of coordinated effort…to specifically have officers who are trained to handle those sorts of scenarios so that when there is an issue, they can respond,” he said. “[The Chicago Police Department]’s been able to do this, [and] there are police officers in Baltimore and Newark and New York City…to make sure that when there are mental health emergencies, they’re handled in the best ways possible.”

First-year Kyle Shishkin is running to be the Undergraduate Liaison to the Board of Trustees, on a platform of “Communication, Accountability, and Transparency” (CAT).

Shishkin said he is pursuing the position because he feels that he can provide undergraduates a greater voice in the administrative decisions that affect them, particularly with trustees.

Shishkin has three initiatives to make student voices better heard: a letter to the board, lunch with a trustee, and consensus construction.

The letter to the board—which requires 2,000 student signatures—would allow students to highlight important campus issues to the trustees.

“While getting 2,000 votes will be hard, I believe it is doable,” he said. “And when the trustees see that almost a third of the undergraduate body wants an issue to be considered they will have to look deep into the issue.”

The other initiative, lunch with a trustee, aims to give small groups of students a chance to have conversations during a lunch session.

His third idea, “consensus construction,” would gather students who represent certain groups on campus to meet with the trustees before events, allowing them to express their opinions.

Additionally, if elected, Shishkin plans to facilitate discussion with board members around what he sees as the University’s inconsistent invocation of the Kalven Report, the 1967 statement that many seen as a University statement of political neutrality.

Shishkin highlighted letters to President Donald Trump on which University President Robert J. Zimmer has been a signatory, such as the one regarding students attending U.S. universities on Deferred Action for Childhood Arrivals status, as an example of what he considered an inconsistent application of the report’s principles.

“This university has sent letters to President Trump, which in themselves are political and in themselves have statements ingrained in them. And I would not say whether this is a good or a bad thing [that] they did so, but it does show an inconsistency,” he said.

“The interpretation of what is vital and not vital to the University should also be up to students, to a certain extent. And a big vision of mine is to be able to provide this voice for our students,” he said. “I want to give undergrads more power in decision making so that they can impact policies that will affect students years after we graduate.”

Third-year Pule Nkopane was unavailabe to record a video with The Maroon, but Nkopane's campagin video can be viewed on Facebook: