After honoring their graduating seniors with a Senior Day celebration, the baseball team swept Caltech in a three-game series over the weekend. 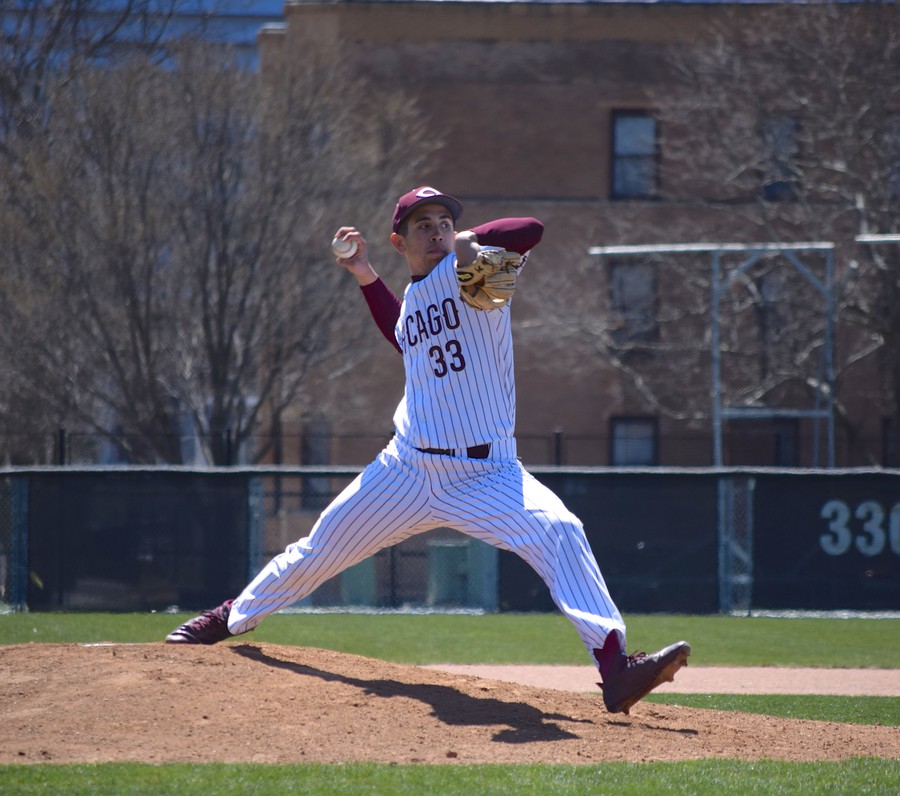 In their very last home games of the 2018 season, the baseball team went out with a bang, handily sweeping Caltech in a three-game series and improving their season record to 22–9, with a doubleheader on Saturday, April 28, and a single game the next day. The Sunday game was particularly special—it was the team’s Senior Day, with fourth-years Matt Slodzinski, Max Larsen, and Ricardo Fernandez honored by teammates, coaches, and fans.

In the first game, third-year pitcher Brenton Villasenor started and pitched six innings, striking out five batters and allowing only three earned runs, with one unearned run in the sixth. Maroon offense was strong early on; the team managed to score five runs in the second inning, with one more in the third and another in the fourth. A three-run rally by Caltech in the sixth did not prove to be enough to beat the South Siders.

The second game ended up being even better for the Maroons, as second-year pitcher Jacob Petersen had one of his best outings yet, allowing only one hit and one run in over six innings of play. Maroon offensive efforts were strong throughout the game, with the first and fifth innings seeing two runs each, but it was the seventh inning where they really shined. First-year shortstop Brian Lyle and third-year outfielder Connor Hickey managed to score one run each, and third-year outfielder Josh Parks batted in a three-run homer for himself, Larsen, and third-year catcher Ian Bohn. Third-year first baseman Brady Sarkon, second-year designated hitter Payton Jancsy and first-year second baseman Jimmy Kelly also scored, bringing the total to 12–1. The eighth inning also saw a double by Lyle that batted in first-year designated hitter Joe Burns and third-year second-baseman Max Brzostowski, along with a sacrifice fly from Hickey, bringing the final score to 15–1.

The momentum continued the next day, with the offense showing glimpses of brilliance with one run each in the first, second, and fifth innings, and two runs in the sixth. However, the team really came alive in the eighth inning, with six runs coming from Hickey, Larsen, Sarkon, Jancsy, Bohn, and Kelly. The pitching staff also managed to successfully hold off Caltech, as starter Fernandez, first-year Chandler Yu and third-year Ravi Bakhai managed to strike out a total of ten batters in the game, with Bakhai allowing only one hit in two innings.

Bakhai acknowledged that the team’s strong performance this weekend was a good sign for the rest of the season. “We took care of business against a team we knew we should beat. Now we need to stay focused, and since we’re not in a conference it’s important to continue the positive momentum and to continue winning in order to make the playoffs,” he said. “Give it our all—that’s all that we can do and control. Shout-out to the seniors for a great four years.”

The Maroons’ next game will be taking place at University of Illinois at Chicago at 6:30 p.m. on Tuesday, May 1.