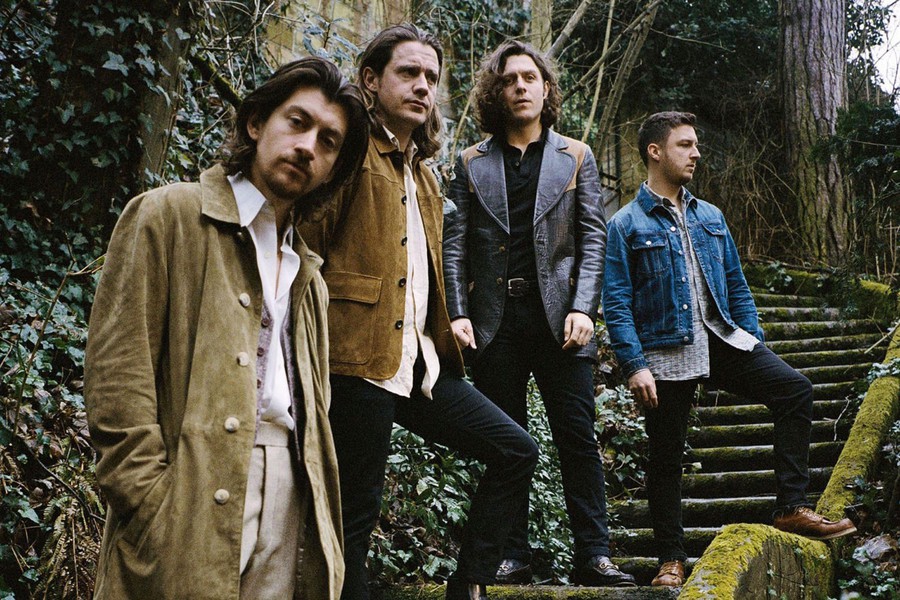 The first lines of the Arctic Monkeys’ sixth full-length LP make the album’s concept seem almost too obvious: “I just wanted to be one of the Strokes/ Now look at the mess you made me make/ Hitchhiking with a monogrammed suitcase/ Miles away from any half-useful imaginary highway.” After releasing the wildly successful Whatever People Say I Am, That’s What I’m Not and the equally successful AM, frontman Alex Turner is desperate not to be typified, warning his audience off the bat that Tranquility Base Hotel & Casino is not a typical Arctic Monkeys record. Whereas Julian Casablancas of the Strokes happily endorsed himself as the torchbearer of new wave punk and garage after the universally acclaimed Is This It, Turner is keen to warm up listeners to a new sound.

Tranquility Base Hotel & Casino is the Arctic Monkeys’ first concept album. It sounds as though the band is far from Earth, recording space music on a distant planet. The album’s structure and design hearken back to David Bowie’s Ziggy Stardust. During their last five quiet years, the Monkeys were trading guitars for synthesizers and pianos and abandoning their traditional “I Bet You Look Good on the Dancefloor” fare.

The album’s title track cues us into Turner’s lyrical and conceptual ambition. Synthesizers and smooth bass provide a smooth jazz backing to Turner’s attempt at psychedelia and displacement. Invoking certain “magical thinking” and “technological advances” absent from previous records, Turner recovers and resurrects ’70s space rock in a really unique way. Not only do they bring back a familiar orchestral sound present in many Pink Floyd albums and Rush’s 2112, but Turner also retains his characteristic British punk baritone vocals.

“Four Out of Five” and “The World's First Ever Monster Truck Front Flip” also evoke the band’s new sound. Both use a simple drum beat paired against orchestral guitar work to great effect, and sound unlike anything in the Arctic Monkeys’ previous discography. These songs are also heavy on smooth bass, which underlines most of the songs on the album.

The centerpiece of the album is the final track, “The Ultracheese.” Their most overtly Bowie-esque number, the song sounds like a traditional piano ballad but is inextricable from the album’s characteristic ambient sound. Turner’s voice has never sounded better or clearer, and he has the lyrical wit to match. He sings, in an amazing moment of wordplay: “What a death I died writing that song/ From start to finish, with you looking on/ It stays between us, Steinway, and his sons.” Turner describes his intimate relationship with his grand piano, apparently one of his most prized possessions since his childhood. Far from being sappy, this is Turner at his most revelatory and poetic.

But what makes a concept album truly great is transformation: a band’s transcendence into something greater and more artistic. On Sgt. Pepper or Pet Sounds, for instance, this transformation feels effortless; new and exciting sounds ask us to listen to a “new band” with open ears. Arctic Monkeys’ conceptual album, on the other hand, sounds contrived. The self-aware lyrics and explicit admission that the album is a “concept of a concept album” is too predictable, lacking the subtlety that would help us take this piece of work completely seriously. Additionally, while the sound of the album is thematically unified, it can become monotonous, partially due to the lack of dynamics in Turner’s voice.

Overall, this album was an exciting, albeit predictable, departure from the typical Arctic Monkeys sound. It was definitely an improvement on 2013’s AM in conceptual ambition. I sincerely doubt Turner wanted Tranquility to be commercial, instead trying to move past cookie-cutter Britpop in an elegant and commendable way. Regardless, I am excited to see what direction the band takes after this 2018 release. If Turner really wants to escape the sound that he became famous for, we should expect another dramatic departure on the next Arctic Monkeys LP.